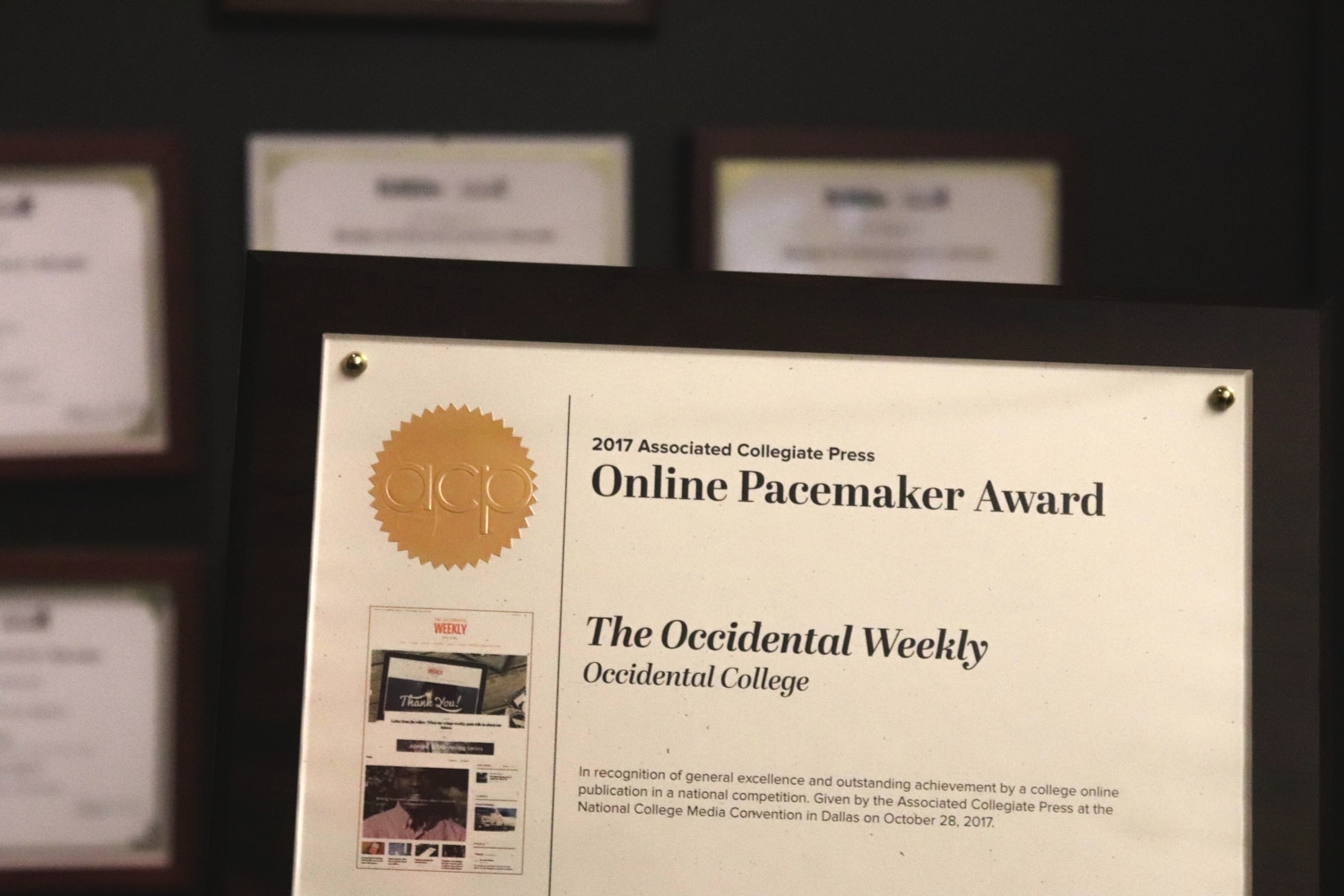 The Occidental Weekly won the Online Pacemaker Award at the Associated Collegiate Press (ACP) Fall National College Media Convention in Dallas Oct. 28, the paper’s third Pacemaker win since 2012. Seven Occidental Weekly staff members attended the ACP Conference Oct. 26–29 to receive the distinction, which the ACP awarded to 14 colleges and universities among 25 finalists and 650 ACP member publications. According to the ACP, the Pacemaker is awarded based on coverage and content, quality of writing and reporting, leadership, design, photography and graphics.

Flora Adamian (senior), editor in chief, said that she was honored by the award, as the Pacemaker is comparable to the Pulitzer for college journalism. According to Adamian, the most important part of the conference was the opportunity to make connections in the field of journalism and for the staff to bond.

“To be a good newspaper staff, you do need to be a family to some extent and have deep interpersonal connections with these people,” Adamian said.

News Editors Christopher Peel (junior) and Gabriel Dunatov (senior) said that they also enjoyed spending time with the staff outside of work.

“I really feel like it changes the dynamic of how you do work, and I feel that’s really productive,” Peel said.

Features Editor Poppy Thekdi (junior) said that she credits the award to the editors and staff from years before her, including former Editors in Chief Wellesley Daniels ’17 (Fall 2016) and Jane Drinkard ’17 (Spring 2017). Thekdi said that she enjoys being a part of the collective effort that is passed down from past leadership teams.

“After each week of printing and publishing, the stories sometimes feel as if they fall into a void,” Thekdi said. “Awards like these give you the chance to reflect back and see how much has been done.”

Adamian said that, unlike many schools represented at the conference, Occidental does not offer a major in journalism or have a journalism department.

“It goes to show how important a liberal arts education is for the field of journalism,” Adamian said. “I honestly think The Weekly holds itself to a really high standard.”

Thekdi said that there is significance in coming from such a small school and still producing award-worthy journalism.

“Compared to larger schools with established programs, it’s hard to imagine how Occidental would stand out,” Thekdi said. “But if you look at our content and compare our consistency, we really do shine.”

“On the website, you can do things you just can’t do in print, and that’s where journalism is moving,” Adamian said.

According to Thekdi, journalism is shifting its focus towards multimedia design and video content; she hopes The Weekly will explore these formats in the future, inspired by the staff’s experience at the conference.

Peel said that he credits the 2017 award to The Weekly staff and Website Manager Yinbo Gao (senior), who is constantly updating, designing and editing The Weekly’s website. According to Gao, the award was predictable.

“Awards mean nothing to me, I think the numbers mean a lot of things — how many views we get, how many countries we have reached,” Gao said.

The Weekly’s website has reached all but nine countries in the world and celebrated six million hits Nov. 1, according to Gao. He feels the scale of the website is important, as it receives high amounts of web traffic in proportion to the college’s enrollment.

Thekdi said that The Weekly’s success can be attributed to the close-knit community and consistency of the staff — writers, illustrators and photographers alike.