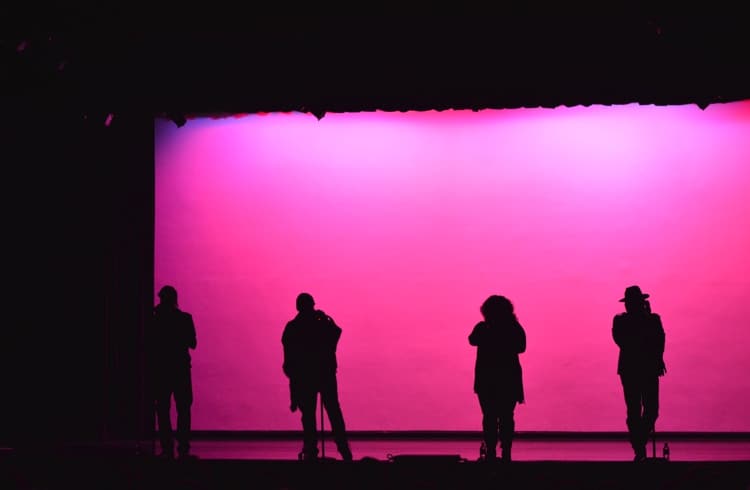 Just shy of 7:30 p.m.Friday, Feb. 3, four microphones stood against a fuchsia backdrop in Thorne Hall, patiently awaiting their respective storytellers to join them onstage. Some audience members chattered expectantly amongst each other, clearly aware of the theatrical journey they were about to experience. Others seemed to have no expectations at all. The dynamic theater/poetry ensemble, Universes, presented a selection of their works, entitled “Live From The Edge,” which swept the audience into a poignantly political hip-hop chronicle.

Consisting of performers Steven Sapp, Mildred Ruiz-Sapp, Gamal A. Chasten and William Ruiz (a.k.a. Ninja), Universes wove together their stories and sounds with the prose of famous wordsmiths, from Eric B. and Rakim and DJ Kool to Robert Frost and Abraham Lincoln, filling the space with richly textured stories of life in New York City and around the country.

A self-described mixture of “theater, poetry, dance, jazz, hip-hop, politics, down home Blues and Spanish bolero,” Universes kept the audience on their toes as they moved from stories of finding love in Central Park to the profound losses of Hurricane Katrina. Ninja beatboxed while Ruiz-Sapp’s rich alto carried the audience seamlessly from Puerto Rico to New York City’s Alphabet District.

If it is difficult to imagine this act, picture four performers, each one singing, rapping, speaking or spitting sound effects into the microphone, producing a euphonious live-action layered track that unfurls itself, telling its creators’ intimate stories.

“Live From The Edge,” according to Ruiz-Sapp, is the anthology of the company’s favorite excerpts taken from their numerous plays and performance pieces, with subject matter ranging from the Black Panther Party to the post-disaster lives of New Orleanians.

The performers certainly did not shy away from addressing the current politics of the national community. For example, Ninja delivered a satirical “commercial break” that commented on gun rights in America, while Chasten, after a politically-charged night, addressed the heretofore unmentioned elephant in the room that was Donald Trump.

The company originally formed in 1995 as a group of friends performing poetry around New York City, according to Sapp, before gaining traction as a legitimate ensemble.

“A friend of ours was like, ‘you guys are verbal DJs!’,” Chasten said. “So we kind of tried to hang on to that tag.”

In the 21 years since, Universes has performed around the globe and are currently the artists in residence at the Oregon Shakespeare Festival, where they will debut a new play in the spring, “Unison,” featuring the unpublished poetry of August Wilson.

As a recipient of the 2017 G. William Hume Fellowship, Universes was invited by the Occidental Theater department to perform and hold a brief residency consisting of workshops over the weekend and visits to several theater classes Monday, Feb. 6.

The residency strives to maintain the theater department’s commitment to providing diverse and inclusive opportunities for Occidental students, according to an email from Professor and Associate Dean Susan Gratch.

When asked to give advice for students of all ages wishing to tell their own creative stories, the performers imparted some inspiring words.

“Be honest,” Chasten said. “Tell the truth, whatever that truth is for you.”

“Don’t put any rules on yourself in terms of how the art’s supposed to come out,” Sapp said. “If you feel like yodeling, that’s where it is. Be exactly where you want to be with it. And stand behind it.”

Love innovative performance art? Email us at Weekly.oxy.edu or Tweet us @OxyWeekly