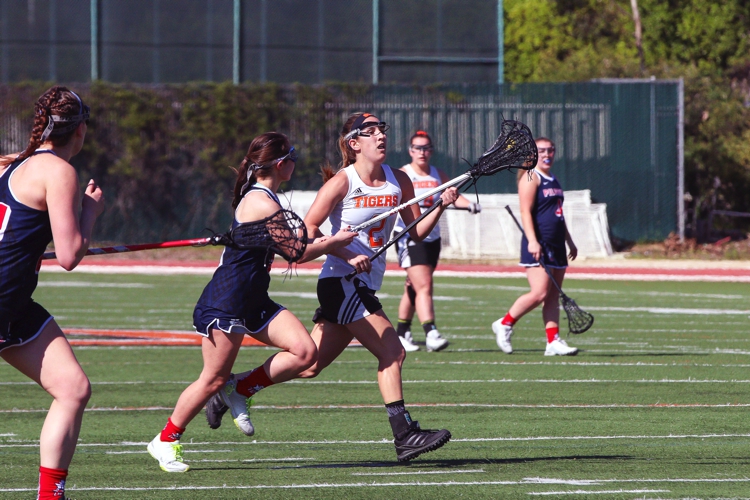 Occidental women’s lacrosse (7-1 overall, 2-1 SCIAC) attacker Sierra Slack (junior) recorded her 100th career goal in a 19-4 win against New England College March 9. The three-year starter has been on a tear over the last two weeks, averaging 5 goals and 2 assists in her last three games.

Slack joins an elite list of players with only five other women scoring 100 goals or more in their time at Occidental, according to head coach Stephanie Mark. Slack sits fifth on that list with 114 goals currently and is very close to jumping up to third, trailing Rebecca Belding ’14 and Isabel Osgood Roach ’13 by a mere 16 goals. Coaches and teammates praised Slack’s recent performance, especially Mark.

“Sierra has a great [lacrosse] IQ and very good stickwork, so she was able to be successful at the college level right away. She is also a great team member and contributes so much positive energy and hard work that it makes her teammates around her better,” Mark said.

At Slack’s current pace, 48 goals her first year, 40 goals last season and already 26 this season with 10 games left, she has a good chance of catching second all-time in scoring Sarah Kessler ’13, who sits at 147 goals.

“I believe if we can compete for one [SCIAC championship] either this year or next, the stats will take care of themselves. She is dedicated to her craft as an attacker and takes pride in being one of the best shooters in the SCIAC — which of course does not come from a lack of hard work,” Mark said.

“Sierra has always been a great player, she came in her first year and immediately made an impact on our team. But watching her grow into a leader, watching her shape our team’s style of play and watching her motivate younger players has been incredible. Something like this 100th goal is really just a great way to acknowledge and celebrate exactly how hard Sierra has worked for this team,” Reese said.

According to Reese, Slack has made being part of the team more fun. Looking forward, Slack is much more focused on the season than any of her individual achievements.

“I was definitely excited to score my 100th, but I mostly wanted to keep focused on the task at hand, beating New England College. My coaches throughout the years have served as role models on and off of the field for me and still continue to do so,” Slack said.

Slack has credited her teammates and coaches, both at Occidental and in the past, for helping her achieve this milestone. She said she would be remiss in failing to mention her dad, Dennis, who helped her learn the basics when she first started playing.

The women are home for their next two games — important conference ties — March 25 against Claremont-Mudd-Scripps and March 29 against Redlands.