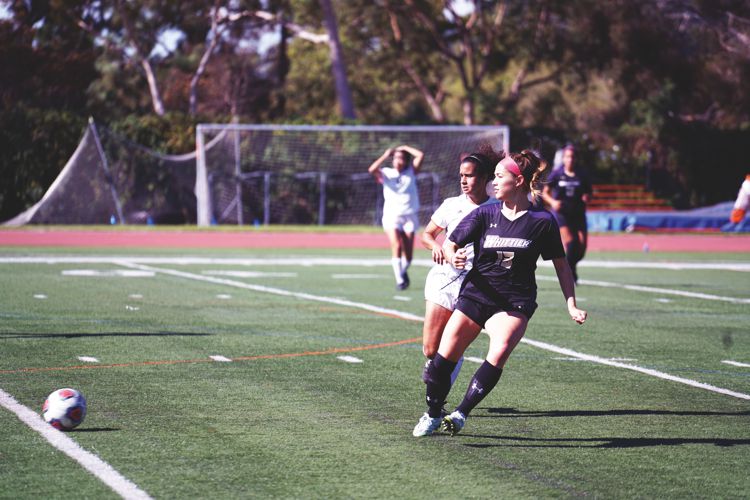 The Tigers dominated possession throughout the game, constantly keeping the ball on Whittier’s side of the field while outshooting the Poets 19-11. Despite countless scoring opportunities, Occidental failed to put the ball in the net during the first 90 minutes, and the game went into overtime scoreless.

Both sides showed obvious signs of fatigue due to the afternoon heat. Occidental threatened to score only once during the first overtime. Neither team managed a shot on goal in the final period, and the game ended in a draw.

“We worked extremely hard in these weather conditions,” forward Julie Khil said. “Still, it was frustrating that we were dominating the majority of a game and it ended in a tie.”

Occidental remains in the playoff race despite their recent struggles.

“It’s been a season of ups and downs,” midfielder Kylie Takafuji said. “If we can push through these last few games and win out, we still have great playoff chances.”

Occidental currently sits fifth in the standings, two points behind Chapman for the final playoff spot. Their schedule concludes with two road games against Cal Lutheran and Redlands. Since Chapman still must face Claremont-Mudd-Scripps (9-2-1 SCIAC, 12-5-1 overall), Occidental can likely control their own destiny in the final game of the season.

Senior forward Paige Wolny emphasized the importance of maintaining a high level of enthusiasm in this tight playoff race.

“Everyone on the team brought a lot of energy to our last home game. If we can keep this energy level up I’m confident we’ll end the season satisfied with our ranking,” Wolny said.

Since Saturday’s game celebrated senior day and homecoming, and marked an extremely important match for women’s soccer, it seemed less than ideal that the team was given an unappealing 11 a.m. time slot. The men’s soccer alumni match, as well as the volleyball and football games, were all slated for late afternoon or evening start times.

Head coach Colm McFeely did not credit the early start to a gender- or sport-related bias, though he said he would like to see a consideration for some scheduling changes in future.

“I think it’s mostly just a traditional thing,” Mcfeely said. “Going forward, if one team has great playoff chances and others don’t, I think it would be worth having a discussion about switching up the schedule.”

“I would prefer the game to be at night if possible, or at least later in the day,” Khil said. “Anyone gets stressed when they have to wake up really early in the morning for a big event, it can be anxiety provoking.”

Khil, Takafuji and Wolny have been major contributors to Occidental soccer during their careers. Khil, one of the captains, has won multiple all-SCIAC honors including the SCIAC Women’s Soccer Athlete of the Year in 2014. Takafuji took home all-SCIAC second team honors in 2013, while also serving as a reliable team captain this season. Wolny, who transferred to Occidental from Idaho State, has been a major contributor this season at forward, playing in all but one game.

Mcfeely had glowing praise for the group.

“I love who they are as people, number one,” McFeely said. “There’s never any doubt that they will put the team above themselves, but at the same time they’re very talented players. Coaching them has been a dream.”