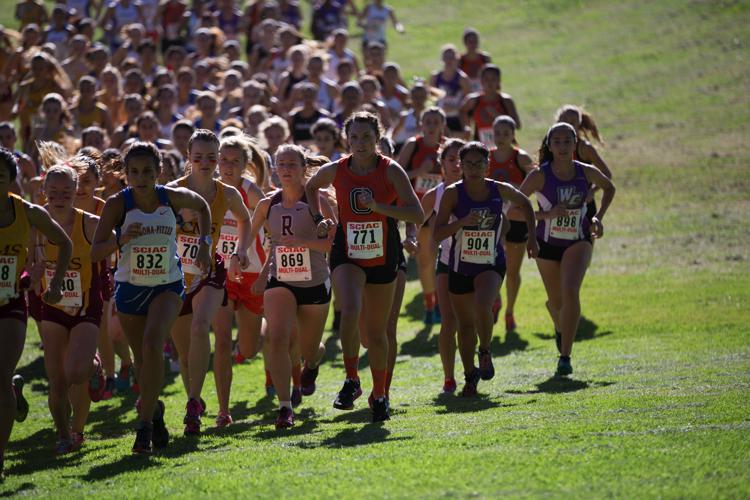 Coming off a pair of third-place finishes at the SCIAC Multi Dual Competition, Occidental’s cross country teams aim to increase the intensity as the conference’s championship approaches.

With late October’s conference championship meet just across the horizon, Occidental’s cross country teams came out of the SCIAC Multi Dual Competition this past weekend with a pair of third-place finishes.

Fiona Pedrick (first year) turned more than a few heads during Saturday’s conference tilt, pacing all of Occidental’s women and finishing 13th overall in just her third career appearance for the school. She’s a major source of promise for a women’s team that has its sights set on competing for a national title.

“She’s impressed us so far and is doing, I think, a little better than we would’ve hoped, which is exciting,” head coach Robert Bartlett said.

While quick to commend his breakout first year on the best race of her young college career, Bartlett has been around long enough to know that Pedrick alone won’t be enough to take this Occidental squad where it wants to go.

“We think the women’s team has the potential to be extremely good,” Bartlett said. “And we hope they can, moving forward for the rest of the season, do a little bit better. But so far, so good and I think the future’s exciting.”

Though this most recent meet did not live up to their expectations, it was an important stepping stone for a team looking to hit its stride in the upcoming weeks.

“As a team, we didn’t compete as well as we had hoped we would,” Eva Townsend (junior) said via e-mail. “But it was a really good experience to build off of and learn from as we move into our more significant races.”

On the men’s side, Keenan Leary (junior), Brody Barkan* (sophomore) and Austin Sankaran (junior) all placed amongst the top ten finishers. Quite like Pedrick’s performance, Barkan’s breakout was a pleasant surprise for a team expecting to find its most significant contributors elsewhere.

“We had a sophomore who came on to run his first cross country season this year, [Brody] Barkan, who’s been more of a track guy,” Leary said. “And he’s really been beneficial to us, just adding another guy who can score and really compete at a high level.”

As the season progresses, the two teams find themselves in very similar positions. Coming off matching third place finishes, Bartlett is looking to get a little bit more out of his groups as they come down the stretch.

“I think going forward we have to be courageous and race a little more aggressively,” Bartlett said. “If we can really go for it and race courageously, I think the team is going to be capable of going a long way.”

The runners, by all accounts, agree with Bartlett’s perspective. They maintain that they have one goal and one goal only: to compete for a national championship.

“I know that we have the ability to compete with some of the best teams in the league,” Leary said. “It’s going to be a really fun, fun atmosphere when it comes down to championship races. This team will be able to tweak and contort swagger to step up at the big stages.”

Coming off a pair of solid preliminary performances, morale remains high amongst Occidental’s runners. They know they have the talent to compete with any team in the nation, and they believe they have the character too.

With SCIAC Championships coming up Oct. 29, they’ll soon have the chance to prove it.