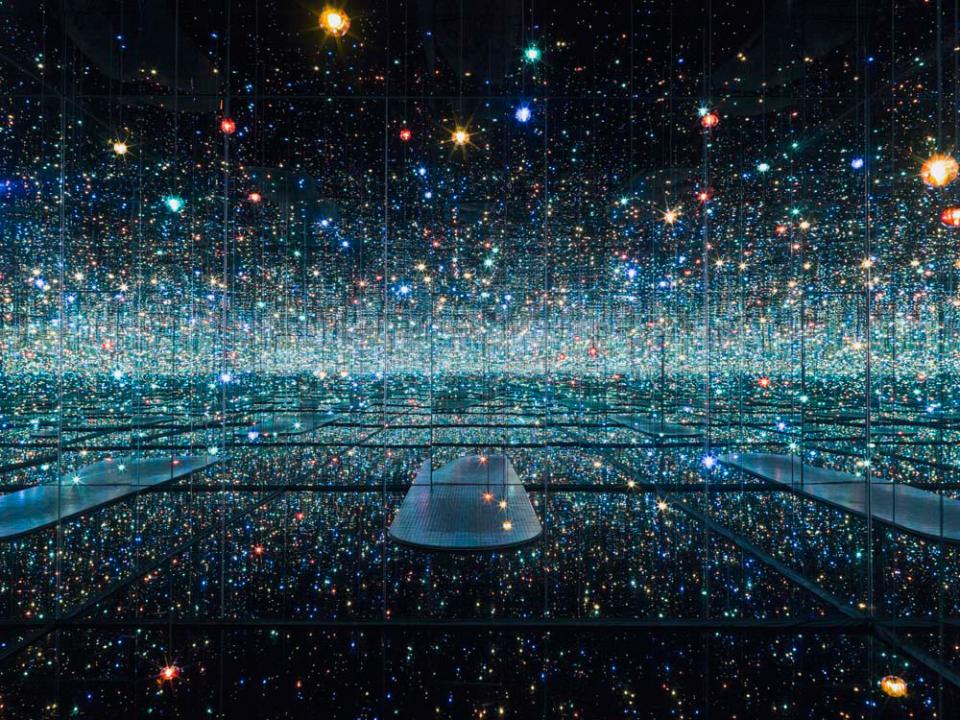 The Broad — a modern art museum located in downtown Los Angeles — sold an additional 40,000 tickets Oct. 2 for Yayoi Kusama’s upcoming “Infinity Mirrors“ exhibition that opens Oct. 21. This additional sale of tickets follows the 50,000 released Sept. 1, which sold out in less than an errour. The exhibition will include six of Kusama’s famous “infinity rooms,” mirrored rooms with strings of LED lights hanging from the ceilings. Additionally, it will combine the rooms with her own large-scale installations, paintings and sculptures ranging from the early 1950s to the present, according to The Broad website. Visitors will have a maximum of 30 seconds in each of the six rooms and unlimited time with Kusama’s other artworks.

According to Artnet News, the LA exhibition will be part of a North American tour of “Infinity Mirrors,” which has already appeared at the Smithsonian Institution’s Hirshhorn Museum, the Sculpture Garden in Washington D.C. and is currently at the Seattle Art Museum. It will also be shown at the Art Gallery of Ontario in Canada and the Cleveland Museum of Art.

“Yumi Kobayashi (junior) is among those looking forward to exploring the exhibit. She first became familiar with Kusama’s work after watching the BBC documentary, “Polka Dot Superstar: The Amazing World of Yoyoi Kusama.”

“The art experience [Kusama creates] is visually interactive,” Kobayashi said. “On a more in-depth note, [Kusama] defies this Japanese societal repression of individual expression. [Her work] is kind of an escape from reality, a fantastical world that she has created herself but can be experienced by everyone around the world.”

Professor Heffernan, chair of the art and art history department and professor of sculpture and photography, has a similar appreciation as a fellow artist for Kusama’s work. Heffernan attributes the popularity of the exhibit to the sense of wonder and awe it elicits.

“Kusama’s ‘Infinity Rooms’ create a gorgeous spectacle,” Heffernan said via email. “The joy and wonder you may have felt as a kid — holding up a hand mirror in front of a larger mirror, marveling at your concentric image reflecting endlessly — that sense of wonder, of finding and losing yourself is magnified in these immersive pieces. I think it also taps into the mysteries of death, of ‘out of body’ experiences, and notions of expanded consciousness. You could say it creates a hallucinogenic experience without the need for drugs.”

The Broad already has one Kusama installation, “Infinity Mirrored Room — The Souls of Millions of Light Years Away,” as part of its permanent collection. It has been on display since Mar. 18, 2014, and will be on display up until the opening of “Infinity Mirrors,” according to the Broad website. It is the museum’s most popular attraction, according to the Los Angeles Times. It has also gained a reputation as being ubiquitous on Instagram, according to The Washington Post, and was used by Adele in 2016 for her BRIT Awards performance.

While Kusama’s “Infinity Mirrors” has received wide critical acclaim, Sofia Benito (junior) acknowledged some of the negative aspects of attending such a popular installation art exhibit. Benito said that she greatly appreciates installation art, especially Kusama’s, which she previously visited in Mexico City. Despite this, her experience with another popular piece exhibited by the 14th Factory — an installation collective that recently concluded — left her feeling rushed.

“In the 14th factory, there’s one specific room that was a ‘2001: Space Odyssey’ replica by the filmmaker Stanley Kubrick,” Benito said. “It was really beautifully done and really the exact replica of a science in the movie but that whole experience was completely cut short by the guard telling you that you had to get out because there was such a long line, people only got 30 seconds to look at the piece.”

Based on her experience at the 14th Factory, Benito is less interested in visiting the “Infinity Mirrors” at The Broad because she anticipates that the popularity Kusama’s “Infinity Mirrors” will prevent visitors from thoroughly engaging with the piece.

“[‘Infinity Mirrors’] seems like the epitome of LA art that’s just concerned with people posting a picture for integral and social capital — I think a lot of The Broad’s work functions like that,” Benito said. “I think [Kusama] has an amazing body of work, but I don’t think it would be worth the pay or the time to wait in line.

The Broad is located seven miles from campus and is just a $7 UberPool away. It is open Tuesday to Sunday; general admission tickets are free and can be reserved in advance here.

*Note: This article was updated on Nov. 3 to correct Professor Heffernan’s title.

Review: “Borat 2” is an indecent plea for basic decency