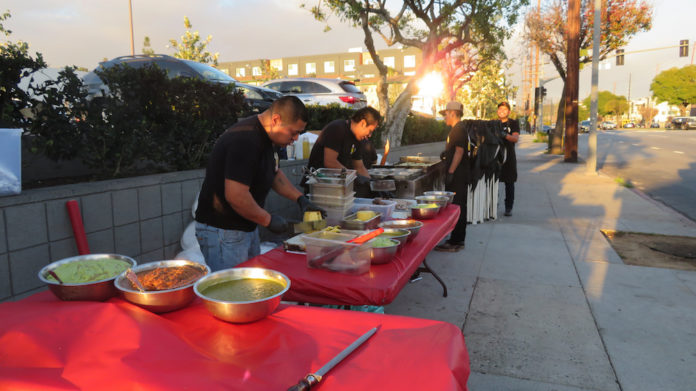 Open Sunday–Thursday from 5 p.m. to 12 a.m. and Friday–Saturday until 1 a.m., the Eagle Rock Angel’s Tijuana Tacos in front of 4211 Eagle Rock Blvd. offers customers Tijuana-style tacos made with hand-pressed tortillas, a heaping portion of their choice of protein, salsa and avocado. There is no physical menu: customers walk up to the grill to choose one of their freshly-grilled meats, such as carne asada, chicken, chorizo or al pastor on a large rotating spit. After watching employees fill their tacos, burritos or quesadillas, customers walk toward the end of the stand and pay an employee such as Sandra Calimanca.

According to Calimanca, customers flock to Angel’s specifically for its Tijuana-style tacos.

“Why go to Tijuana to eat tacos when Tijuana is here?” Calimanca said.

“The two times I’ve gone, it has always been, like, ‘I’ve earned it,’ or ‘I did a good job this week and I’ll treat myself,’” Ruvalcaba said. “It makes me happy eating it.”

Ruvalcaba said the quality of Angel’s is on constant display as employees cook and prepare food in front of their customers.

“You can see them heating up the tortillas in front of you, and you can see that they are cooking the meat fresh for you,” Ruvalcaba said.

Simon said unlike other local taco vendors, Angel’s gives its customers many options for how their food is prepared.

“They allow you to put different stuff on them, and in line they ask you, ‘How spicy do you want it? Do you want this or that?'” Simon said. “I think it’s nice because it gives options — sometimes when you go to a taco stand, you get a taco that’s already pre-prescribed what I’m going to get. This, at least, gives you a little choice within it. Kind of like a Chipotle stand, but a little more real.”

According to Food Insider, Tijuana-style tacos have grown popular as stands like Angel’s have emerged all throughout Los Angeles. Simon and Ruvalcaba said they found out about Angel’s through word-of-mouth.

“Our coach said, ‘Hey, if you want to try out the taco stands, it’s a great part of Eagle Rock culture. There’s a new one in front of Target,’” Simon said. “A few weeks later we went, and we loved it.” 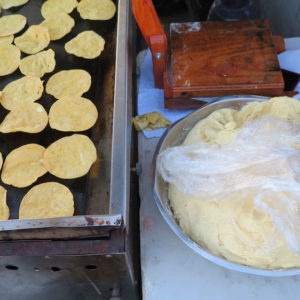 For Simon, the experience of eating at a taco stand is a way to bring members of a community together.

“Whether or not they’re just random people, or people trying to try something new or something that is very cultural to Eagle Rock, I think it’s really just to have there be hype around food,” Simon said.

Ruvalcaba said stands like Angel’s bring back qualities of an old Eagle Rock culture that has been disappearing over the past few years.

“I think that Eagle Rock culture is getting replaced, mostly because we are seeing Eagle Rock change and become more gentrified,” Ruvalcaba said. “You can kind of see the taco stand as a push back and a return to how Eagle Rock used to look like four or five years before gentrification hit.”