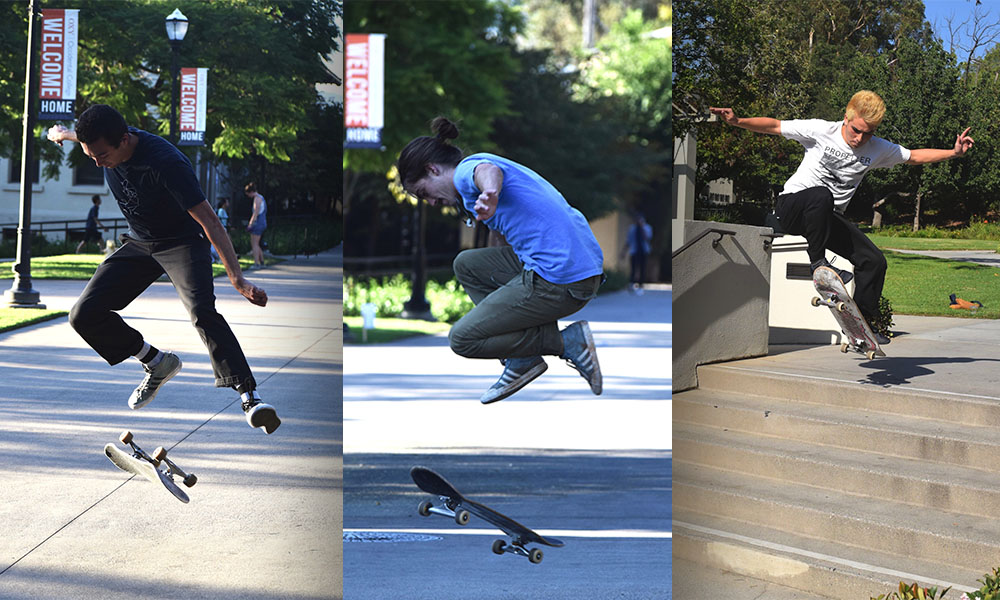 Nestled within Los Angeles, a city whose skateable streets and architecture have earned it ubiquity within skateboard culture, is Occidental’s very own skate community composed of a diverse mix of students from across the country. These student skaters congregate on the academic quad and Sycamore Glen in their spare moments to perfect their kick flips and backside grinds.

Kenny Shoji (sophomore) noticed the Occidental skateboard community was larger and more connected last year with the inclusion of Skate House, an off-campus house with ramps in the backyard for skaters to practice. Despite the majority of the Skate House residents graduating last year, they have left their legacy of promoting inclusivity within the skate community. Paul Flood (junior) — who skated when he was younger, but took a break until last year — credits Zander Silverman ’17 with helping to bring him back to skating.

“I was really new to skating last year, and I just started hanging with Zander, who was a senior last year, and he’d always say hi to me skating. It’s really a mutually supportive group,” Flood said.

Despite the athletic ability and skill skaters possess, many do not consider skateboarding to be an actual sport, according to Shoji. Shoji explained the tensions between skateboarding’s inherent unconventional nature and the athletic training it requires.

“Skateboarding itself has roots in anti-establishment, but it’s still a physical activity that’s very tough,” Shoji said. “The older skateboarders have started to realize that if they want to keep doing it, they have to treat it like a sport … it’s like the anti-sport sport.”

Both the east and the west coasts have distinctive styles, but no group is monolithic, according to Shoji, especially here at Occidental. Julian Halpern (sophomore) from Berkeley, Calif. said there are many more professional skateboarders here than in his hometown. Shoji, who is from New York City, went in depth into how the contrasting aesthetics of Los Angeles and New York City lend themselves to the coasts’ differentiation of styles.

“LA itself is perfect for skateboarding: smooth ground everywhere and beautiful things to skate,” Shoji said. “New York has lots of rough ground, grungy crowded streets, so that’s where the divide lies with the architecture and how the cities are built.”

Despite the lack of specified areas for skateboarding on campus, according to Halpern, Occidental’s own architecture serves as an adequate skate park for many student skateboarders. Some of Flood’s favorite spots to skate on campus include the academic quad and Sycamore Glen. Famous professional skateboarders have been known to grace the campus with their skills. Professional skateboarder Curren Caples skated off the rail in front of Erdman this past June; ten years ago, skateboarder Heath Kerchart did some tricks off of the rail in front of the Mary Norton Clapp Library, according to Shoji.

Halpern described the impressive reputation of the skate areas near campus.

“The Hollywood of skateboarding is right here in Pasadena. The street spots around our campus are iconic. Many famous skaters, including one of my favorites, Ishod Wair, have skated our campus. Los Angeles is flat ground heaven,” Halpern said.

In his perfect world, Shoji said he would spend almost half his day skating. According to Flood, skateboarding is a difficult sport to get into because it requires hours of practicing and often leads to injuries. For Halpern, skateboarding is worth the risk and he feels grateful for the community of skaters on campus.

“The ability to spend time outdoors, get exercise and work on new tricks with my friends or alone is the best study break I have,” Halpern said. “We all have heavy courseloads and social lives outside of skating, but the effort made to grab your deck and hit the streets always pays off. “