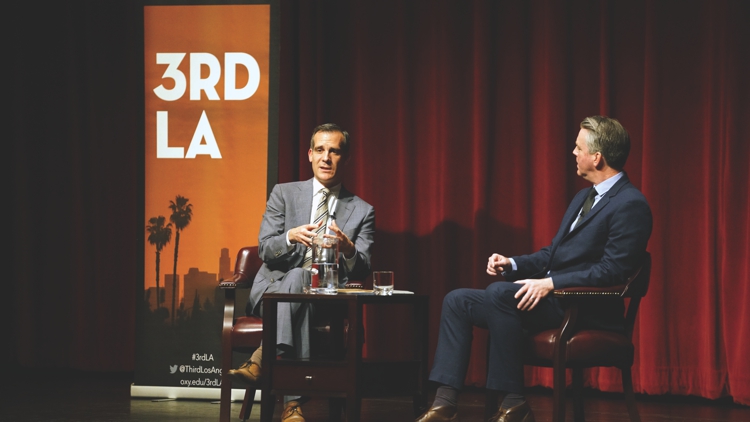 The Urban and Environmental Policy Institute (UEPI) hosted Mayor of Los Angeles Eric Garcetti as part of the Third LA series 7:30 p.m. March 22 in Thorne Hall. Christopher Hawthorne, an Urban and Environmental Policy (UEP) professor and architecture critic at The Los Angeles Times, established the series during the spring 2015 semester and teaches a yearly class called The Third Los Angeles Project. Approximately 1,000 people registered for the event, which was open to the public, according to Hawthorne.

Garcetti’s visit to Occidental was an opportunity for Hawthorne to discuss Third LA with someone who has direct access to future policies and to connect with a longtime associate. Garcetti taught at Occidental in the Diplomacy and World Affairs (DWA) department from 1999–2000, according to Jim Tranquada, director of communications.

Garcetti began the discussion with a reflection on his first term as mayor. Garcetti, who was elected for a second term March 7, spoke about the lessons he learned as mayor during his first four years and about his hopes to improve in the next four. He intends to be directly involved with new architecture and infrastructure projects, both in their conception and completion.

“I didn’t think people in such high positions took as much time as they do to think about the built environment,” Silverstein said. “I particularly appreciated his example of the schools that were designed to be utilitarian, because I attended a school like that and it was really unpleasant.”

The title of the series references the history of LA’s development. The first stage of development, according to Tranquada, spanned 1880–1940, when the city burst onto the landscape of Southern California and grew at an exponential pace. The second stage, 1940–2000, saw the growth of suburbia, car culture and private industry. Both the first and second stages of LA’s development profoundly impacted the third stage, present-day society.

“In the Third Los Angeles, all of the things that LA is now aiming to add — mass transit, places to walk, civic architecture, forward-looking urban planning, innovative multi-family housing — in many ways represent a return to the First LA,” Tranquada said.

Garcetti to explained his stance on recent bills, such as Measure S and Measure M. Voters rejected Measure S, an initiative to place a moratorium on construction in the city for two years, but passed Measure M, a tax to improve LA’s public transportation system. Both decisions align with Garcetti’s overall push for more comprehensive and progressive urban planning.

“As our city grows … we’ve seen a lot of jobs come back here. It can cause a housing crisis, because you can’t build housing quickly enough to accommodate all the jobs, and that pushes people out and displaces them … I’m a pro-planning person,” Garcetti said.

Measure M will work to expand public transportation by improving bus lines, increasing the number of bus routes, establishing 15 new rail lines and possibly building an underground subway system. The new tax will allocate $120 billion toward infrastructure in the city over the next 40 years.

“This is the largest public infrastructure undertaking for transportation in the nation’s history at the local level, times two,” Garcetti said.

The event was a success, according to Silverstein and Hawthorne. Hawthorne hoped the conversation would offer an in-depth look at LA’s urban planning. Indeed, the event found distinguished between good and bad design, an issue Hawthorne sees as fundamental to improving the city’s plan.

“I was very happy to hear [Garcetti’s] commitment to raising the basic level of design, and trying to figure out how to do that. Whether that’s through a ‘design tzar’ at City Hall who oversees design and architecture, or whether it’s just raising standards,” Hawthorne said.

There are two more Third LA events planned for this spring, both focusing on the future of LA’s urban planning. The series is an opportunity for the community to engage with local political leaders and for students to study and experience the complex systems of policy that affect the planned environment of LA.