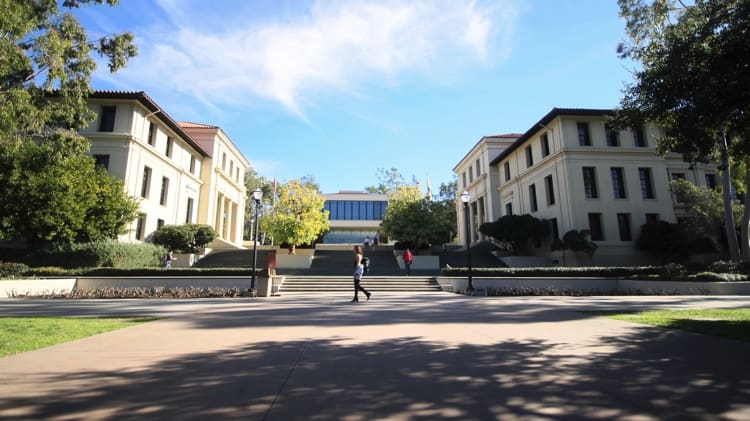 Upper-campus residents are easily recognizable. Behind their endlessly blistered feet and harried looks from rushing back to campus are a milieu of traumatic experiences: the unforgiving walks back after a late night studying, or forgetting a textbook in their dorm. You might also notice their iron calves and massive backpacks, usually stuffed with a tent, two pounds of Clif Bars and emergency flares to fuel their journeys back home.

If you’ve ever walked up to Stewie Hall, you know the struggle. With weak legs and sweat pouring down your skin, each step feels like plunging into infernal quicksand. Once you finally reach the entrance of Stewie Hall, you know the grim sight that awaits you: students lying on the ground, covered in bandages with tears streaked across their faces.

For years, students have dreamed of alternatives to walking up the hill. But recently, lower campus dorms dealing with overflow have put the issue in the limelight. When residents of Braun or Norris run out of energy for the arduous hike to their rooms, they sneak in. One Bell-Young resident tripped over an upper-campus resident who had set up in a sleeping bag in the middle of the hallway, making him bump into the wall and get a bloody nose.

Upon reflection, the Bell-Young resident said he could have been more careful. But he still believes the problem has been left unaddressed.

“I am definitely not trippin’ about getting these people out of here,” the resident said.

“If I hear bowl shatter in the kitchen around midnight, I know it’s probably justsome harmless Berkus kid trying to get some shut-eye. It’s really no big deal,” a Newcomb resident said.

Students occasionally get stuck in the windows, too. One RA called the Los Angeles Fire department to extract someone who had their underwear caught on a windowsill and was unable to move further.

To help think of creative solutions, we sent a Google form to upper campus residents and received some great suggestions for alternative transportation methods. Among them were a ski lift, giant trampolines and an electric zip line.

Some student organizations are taking the matter into their own hands. Rumor has it that Engineering Club is working on a catapult that would launch students from the quad onto helipad-sized cushions in front of each upper-campus residence hall. However, they said the project was suspended after a test run vaulted Oswald onto President Veitch’s car.

“It was an honest miscalculation,” Julie Hahn, a member of Engineering club, said. “We’re going back to the drawing board on that one.”

In the meantime, however, the campus has to cope. Some students said they’ve learned to actually enjoy climbing the hill. #Calvesforsecondhalves became a popular hashtag on Twitter among Oxy athletes, who are confident that the hike helps them get that extra boost late in athletic performances. Some of these students will meet up for purposeful treks up the hill to get an extra workout in.

For those still trying to adjust to the hike, there is a special session of Meditation Club for upper campus residents titled “Welcome to Hill: Elevating yourself to new heights” in Herrick Chapel (Wednesdays at 6 p.m.). The intention-setting is focused on resilience.

Ultimately, like the showers of Stewie Hall, the upper-campus trek is a part of the Oxy experience that brings individuals closer. Until the ski lifts are constructed, rock that wicked smile and find ways to enjoy your hikes. Consider having a picnic on the stairs to Pauley or laying down your towel in the middle of Bird Road for some So Cal tanning. Embrace the climb.