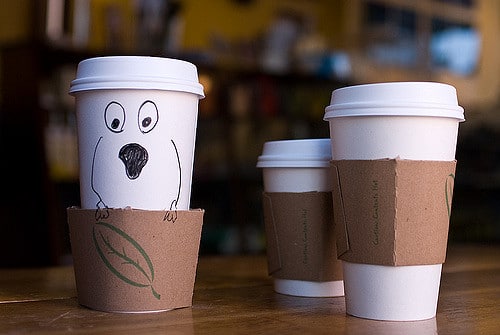 All interviews in this article are fictional. Any parallels to any persons living (or dead) are purely coincidental!

Nobody in Highland Park knows quite what to make of York Boulevard’s newest addition. The sign on its window reads “à bloc | coffee | cycling | community.” Its website describes it as, “A coffee bar and cycling centric [sic] retail experience; founded and fueled by passionate cyclists.”

So, it’s a cafe and the baristas ride bicycles? Or is it a cycling-themed cafe? Do they just have an unusable, decorative bicycle in the back of the store and use it as an excuse to sell you stuff? Perhaps it’s all of the above; perhaps it’s neither. But one thing’s for sure — it is a perfect fit for Highland Park’s hipster strip.

“Even I think it’s pretty bonkers, and I started Vapegoat,” Chester Harrison, owner of the vape lounge/art gallery, said. “Although it’s always great to see a new business on York. It seems like a perfect fit.”

But is it too bonkers? Too perfect a fit? An overpriced bike-themed coffee shop seems a little too on the nose for the neighborhood; it’s straight out of an anti-millennial Fox News tirade. Almost suspiciously so.

To complicate matters more, à bloc (whose name is capitalized differently everywhere it’s mentioned) seems all but destined for failure. It is located across the street from both Cafe de Leche and Highland Cafe — the neighborhood’s most popular coffee shop and brunch place, respectively. It seems unlikely that à bloc can differentiate itself enough to compete. Maybe it isn’t such a perfect fit after all.

Some residents think this unsustainable business model is by design. For instance, Nathan Zacks-McCourt, an unemployed “ska comedian” wearing torn overalls and polarized Ray-Ban sunglasses who just came up to me on the street, unprompted, thinks à bloc might be a statement.

“Personally, I think it’s a satirical performance art piece,” Zacks-McCourt said. “It is so perfect and so doomed. I think by actually leasing office space that could have been used by a legitimate, local business owner the satirists delivers an extreme-realist, extreme-brutalist and quasi-dadaist/existentialist critique of the socio-political undercurrents of gentrification. And on top of it, they have some really heckin’ good cold brew, my dude!”

I had to walk away from this man before I pushed him into traffic, so that was all I heard. But, hard as it was to admit, his broader point made sense. That is totally something that would happen in this neighborhood. I asked more Highland Parkers their thoughts on the matter, and the idea didn’t seem so crazy to them either.

“You know, that wasn’t my first thought, but I could totally see it,” Sally Henderson, an urban land-sculptor said. “It does read as kind of a parody of itself. Maybe they did that on purpose. Although, sometimes I do go in there to get my bike tires changed out while I eat a curried jackfruit sandwich.”

Other residents thought that while à bloc may well be satire, they didn’t care one way or the other.