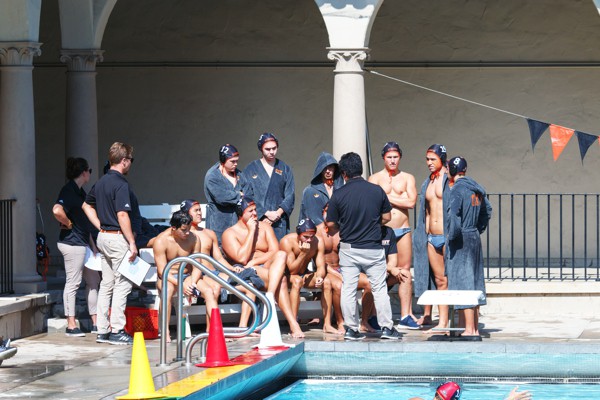 After 18 months as the men’s and women’s water polo head coach, Christopher Lee left Occidental this month to accept a position as assistant women’s water polo coach at University of California, Berkeley. Lee’s departure follows a trend of high coaching staff turnover in Occidental water polo; the Tigers have had four different coaches for the women’s team and two for the men’s in the last four years.

This lack of stability has corresponded with a rapid decline in performance, especially with the women’s team. Led by 10-year head coach Larry Zubrin, the Occidental women ranked No. 1 out of the 19 teams in DIII from 2011 to 2012 and began the 2013 season ranked No. 3. Since Zubrin’s final season in 2014, the team has compiled a 16-59 record with a different head coach each year.

Senior attacker Zulema Iboa believes that the inconsistency of coaches has had a major impact on the team as a whole.

“Maybe the Athletics department isn’t putting much focus on aquatics and water polo because they aren’t seeing any improvement,” De Groot said. “But how can you expect there to be improvement or any wins if you are not giving us a reliable coach?”

Many of the players’ concerns purportedly stem from the departure of interim head coach Jon Bonafede following the 2015 season. Bonafede was not rehired and soon after took the head coach position at Cal Tech.

“We were all very strong advocates for [Bonafede] to be our official head coach,” Iboa said. “He said he would have taken the position in a heartbeat had they offered it to him.”

Last season’s captain Katie Gibbs ’16 and some of her teammates helped interview prospective coaches, including Bonafede, but Athletics did not tell them their final decision. Athletics hired Lee, who has worked with the USA women’s water polo team since 2011.

“We didn’t know [Lee] became our coach until one of our girls saw it on Twitter,” De Groot said.

Iboa and De Groot lamented that Twitter got the news before the team and felt that Athletics disregarded the team’s input in favor of the candidate with more prestigious experience.

Iboa interpreted Lee’s absence from some men’s teams practices in favor of the 2016 Rio Olympics as a sign that Occidental was not Lee’s top priority.

“To us, it seems like a little out of DIII reach to expect a coach at that caliber to stay at our school and not use this as a stepping stone,” Iboa said. “It’s kind of just a slap in the face to us.”

According to Athletics Director Jaime Hoffman, Coach Lee was hired because of his experience and professional qualifications.

“Coach Lee was the top choice 18 months ago because of his experience in coaching at top levels of the game and his commitment to professionalizing our programs,” Hoffman said. “In his short time at Oxy, our teams benefitted from both of those attributes.”

Despite his quick departure, Lee himself envisioned a lifelong career at Occidental when he took the position.

“I certainly wasn’t expecting to entertain job offers, I was more focused on all the work that I hoped to put into Oxy in my time here,” Lee said

Expectation aside, Lee departed the program after a mere 18 months. Though shocked, neither De Groot nor Iboa blamed him for making the decision that he believed was best for his career.

“At the end of the day one of the biggest considerations was how this position fit into my career path,” Lee said. “I really enjoyed my time at Oxy and I was fortunate to work with some incredible student-athletes, but this was an offer I just wasn’t able to turn down.”

Frustrating as it may be, Hoffman said that high coach turnover is not exclusive to Occidental and besets many SCIAC schools. According to Hoffman, Occidental has lost coaches for a variety of reasons ranging from cost of living in Los Angeles to substandard athletic facilities to opportunities to coach at DI schools.

Occidental’s coaching situation is certainly not unprecedented. Schools such as La Verne and Cal Tech are both experiencing similar periods of coaching turmoil with both schools going through three head coaches in the last four years. However, this is also not a typical experience in the SCIAC; the median length of tenure is nine years for current water polo head coaches.

Another factor contributing to quick turnover is that many Occidental coaches are employees “at will,” meaning they are hired under agreements with no specific time frame. Some other SCIAC schools hire coaches under faculty contracts, Hoffman said. With a contract, the school or the coach can only terminate the employment in the way specified in the document instead of at any time for any reason.

Hoffman is hopeful for the water polo teams’ trajectory. She thinks prospective water polo coaches will be enticed by the athletics facilities renovation scheduled for this spring that will include a new regulation-size pool.

“While we can’t guarantee that our next coach will commit for several years, I will stress in the interview process that a lack of consistency at the top is a major detriment for recruiting and team morale,” Hoffman said. “I will do my best to find someone who sees Oxy as a perfect career fit as well as an aspirational student-athlete environment.”

De Groot and Iboa are less optimistic for the future, pointing out that the Athletics department’s proposed renovations on one of the NCAA’s oldest pools have been in the works since they themselves were recruits in 2013.

Both players said they fear prospective student-athletes may be wary of joining an unsteady program, so they are attempting to discuss with Athletics a plan for their team that will lose six seniors next season.

In the meantime, assistant coach Jack Stabenfeldt ‘14 will be the interim head coach tasked with turning around the men and women’s water polo teams.