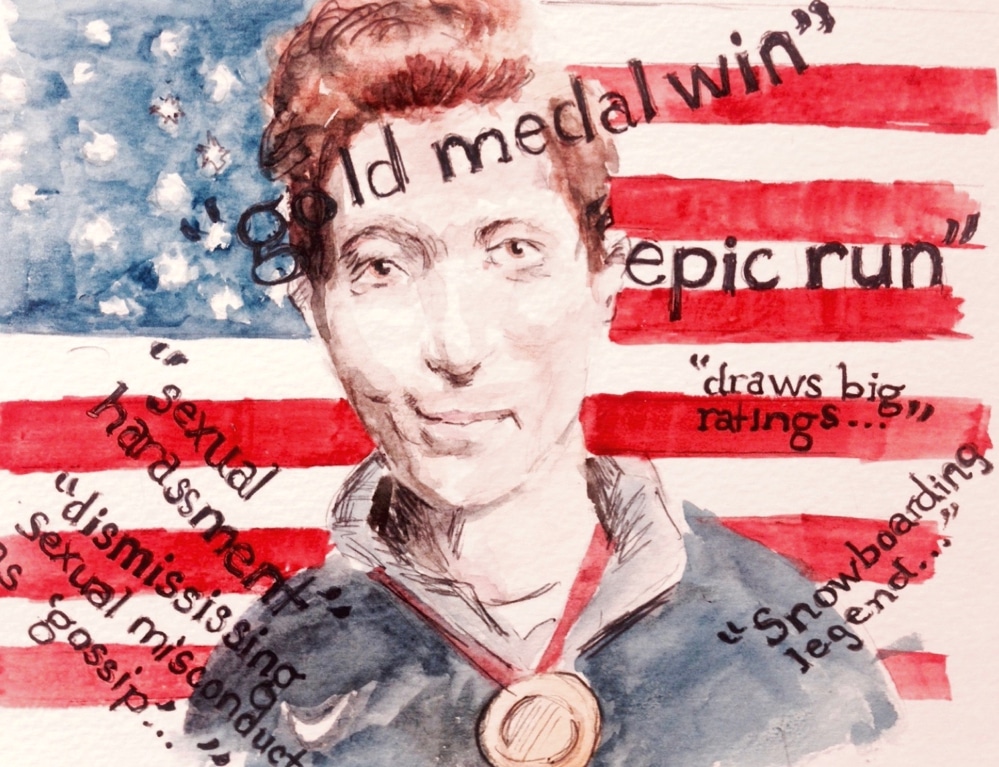 I refresh my Instagram to yet another image of Shaun White. Since the opening of the Winter Olympics Feb. 9, White’s bright red hair has flooded my newsfeed and taken over my Twitter. He is everywhere. He’s been the golden boy of American sporting culture since he entered the professional scene at 13 years old. He can stick back-to–back 1440’s, land a backside double McTwist 1260 with ease and nail a cab double cork 1440­­­­­­ — feats that most couldn’t dream of doing. White is a four-time Olympian, winner of three gold medals and 10 Excellence in Sports Performance Yearly Awards — but more importantly, he is an accused perpetrator of sexual misconduct. White represents what is wrong with American sporting culture; it prioritizes athletic accomplishments and ignores anything that might undermine them.

White competed in the 2018 Winter Olympic Games, despite a 2016 lawsuit from former bandmate Lena Zawaideh detailing graphic harassment and verbal abuse. According to the case overview, “Zawaideh claims White sent her sexually explicit and graphic images and forced her to watch sexually disturbing videos.” This behavior was not an isolated instance; the case states that White sexually harassed Zawaideh for over seven years. The authoritarian environment that White created imposed strict demands on Zawaideh; he required her to wear sexually revealing clothing, refrain from wearing red lipstick and cut her hair. Additionally, as the financier of their band, Bad Things, White ceased paying Zawaideh in an effort to “cut costs.” Zawaideh’s case claims she did not receive any of her contractual payments from the entirety of 2014. White and Zawaideh reached an undisclosed settlement in May 2017.

During an Olympics press conference when Matt Gutman of ABC News asked White about his past behavior, White said, “I’m here to talk about the Olympics, not gossip.”

“Gossip” is a powerful word that diminishes the validity of these claims. “Gossip” turns accusations of sexual misconduct into tabloid talk. We have seen it time and time again, with Ben Roethlisberger, Jameis Winston, Kobe Bryant — who just won an Academy Award for his animated short, “Dear Basketball,” despite his history with sexual misconduct. The list goes on. Male athletes can write off sexual misconduct as “gossip” and still have hall-of-fame careers.

Not surprisingly, NBC has been totally silent about White’s history with sexual misconduct and made him the face of the 2018 Winter Olympics. During his gold medal run Feb. 13, almost every sports media platform was dedicated to White. NBC Olympics’ Instagram posted over 54 images of White and published captions referring to White as “not human,” “the GOAT” and “golden again.” Frankly, White’s actions and NBC’s silence are nothing short of atrocious, solidifying how much power the media has in crafting a dangerous narrative of an American hero.

Men’s professional sporting culture represents the pinnacle of masculinity — competing requires power, strength and fearlessness. Yet when we praise these qualities in sports culture, we accept norms produced by toxic masculinity, perpetuating behaviors such as violence and harassment. While other toxically masculine men in the United States have started to fall from positions of power, professional athletes remain relatively untouched. Toxic masculinity has become so deeply ingrained in the professional sporting culture that we don’t see the dangers of this behavior clearly. We praise White for the discipline it took to nail a double cork 1440 while failing to call him out for his consistent abuse of power.

Some may argue that the public should view White’s problematic behavior as separate from his athletic achievement. Athletes like Charles Barkley have cited in the past that they are paid to “wreak havoc on the basketball court, not paid to be a role model.” White has clearly done his job as an Olympian by bringing three gold medals to the United States, but winning gold is not enough. Olympic athletes represent our country to the rest of the world; we should hold them to a higher standard.

I am not here to argue that White isn’t an incredible athlete or that he hasn’t brought attention to the sport of snowboarding because he is and he has. I am here to point out that there are many incredible snowboarders to showcase that do not have a history of sexual misconduct. Athletes like Chloe Kim, Jamie Anderson, Ben Ferguson and Redmond Gerard are just a few of the notable athletes who deserve recognition of the same caliber as White.

White does not deserve the platform that he is given by major news outlets, the snowboarding community and the thousands that look up to him. Some may see White as an American hero; I say Americans need to rewrite their definition. The way that the International Olympic Committee, The United States National Team and media outlets like NBC have handled White’s history of misconduct keeps abusers on an untouchable pedestal. Enough of White and other men who use their positions of power to make women feel unsafe. I am tired of it.

Shai Goodman is a junior sociology major. She can be reached at goodmans@oxy.edu.