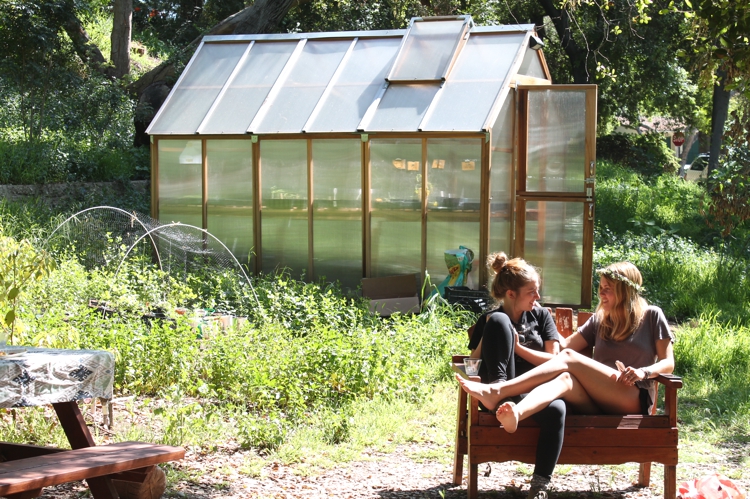 The Food, Energy and Sustainability Team (FEAST) Garden Party, which took place from 1–5 p.m. this past Friday in the FEAST garden, featured arts and crafts, refreshments and live entertainment. FEAST members Charlotte Umanoff* (junior) and Triana Anderson (junior) and Tie or Dye club members Lila Chu (junior) and Eleanor Wells (junior) led the collaboration between the clubs to host an open house intended to welcome newcomers to the garden and fundraise for FEAST. The organizers sold logo shirts designed by Chu that students could tie-dye or bleach-dye at the event.

For Chu, the goal of the event was not just to fundraise, but to unite food, art and music to cultivate creativity separate from academia.

“Music in the garden is kind of a match made in heaven,” Chu said. “It’s a very nice escape.”

Wells hoped to attract more students to share the view of the flourishing garden as well as unwind.

“It’s fun having a bunch of people get together and make art and get messy,” Wells said.

The partygoers consisted not only of seasoned gardeners but also newcomers. Jessica Fay (senior) had never stepped foot into the FEAST garden prior to attending the party.

Fay wishes she had visited the garden earlier in her college career.

“I thought it was an exclusive club or something,” Fay said. “I didn’t realize it was open to everyone.”

For Umanoff, the party served its purpose. Lamenting on the lack of student awareness of the garden, Umanoff planted the seed of a garden party during a FEAST meeting earlier this semester.

“The garden is really underutilized,” Umanoff said. “A lot of people on campus — especially [first years] and sophomores — don’t even know that it exists, or where it is, or that they can go get eggs and vegetables or do their homework there.”

Noting the abundance of produce FEAST grows, Umanoff wishes more students knew that they have access to it in return for signing up for a weekly watering shift. She emphasized that, as an official student service, FEAST welcomes anyone. Students can join the club or visit the garden in any capacity at any time. Umanoff hopes to bring more students to the garden through collaborations with other campus groups so everyone has the chance to experience its wonder before they graduate.

“It’s the most beautiful place on campus,” Umanoff said.

*Umanoff is a Weekly staff member.