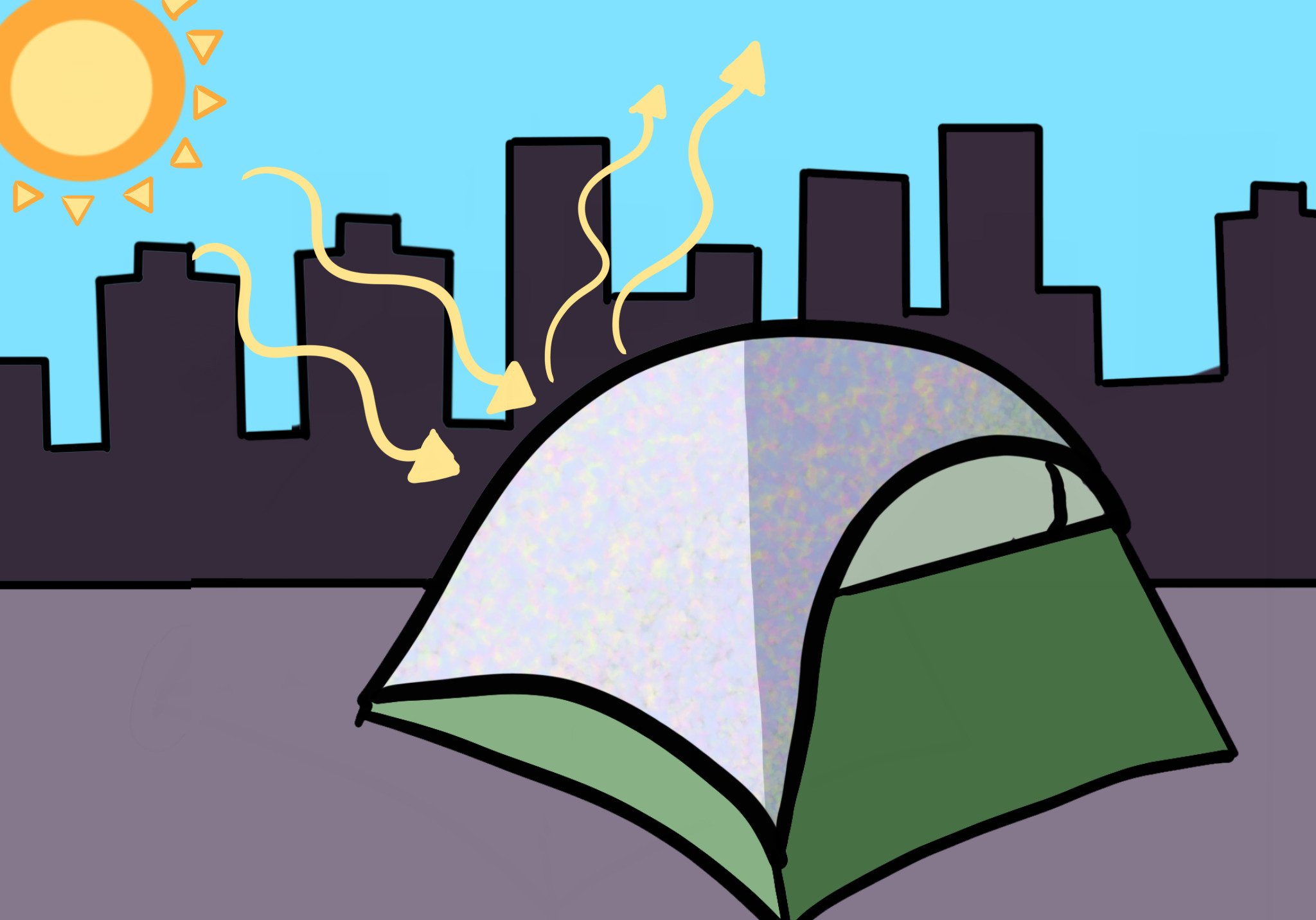 What started as a USC class project attempting to engineer solutions for a refugee camp in Greece is now protecting unhoused Angelenos from unsafe temperature conditions in their tents.

USC seniors Jacob Totaro, Lauren Yen, Laura Roed, Gianna Morena and Ayeshna Desai first thought of the tent-topping “tile” last year when they were enrolled in “Innovation in Engineering and Design for Global Grand Challenges.” The class asks students to research “life-saving or life-improving innovations” for people affected by transnational crises while incorporating “the private sector and input from affected communities,” according to the course syllabus.

Repurposing a common material used in greenhouses, the five USC students created a tent-topping tarp that can lower interior tent temperatures in the summer, raise tent temperature in the winter and lower humidity inside the tent.

Roed, Torch’s chief creative officer, said she and her classmates visited a refugee camp on the Greek island of Lesbos called Moria, which was one of Europe’s largest before it burnt down in September 2020. According to Roed, their initial plan was to work on issues surrounding waste management, but the group soon saw there were more pressing concerns than the presence of trash.

“We decided to focus on a more immediate need that we heard from so many people — that temperature and humidity were a big problem,” Roed said.

The team found that they could keep the most people warm for the lowest cost by regulating heat at the tent level. After months of prototyping with different materials, they had a lightbulb moment after being inspired by greenhouses, according to Totaro, who is now Torch’s chief executive officer.

“We were like, ‘Wow, if greenhouses are able to regulate the temperatures for plants, why can’t it do the same for humans?’ Because in the summertime, the greenhouses reduced the inside temperature and then in the wintertime it keeps it warmer on the inside,” Totaro said.

They learned that industrial-scale greenhouses use a material called aluminet. Aluminet is like a blanket woven of high-density, aluminum-coated plastic strings treated with an ultraviolet light (UV) resistant coating. The UV-resistant coating makes the material strong enough to withstand five years of sun exposure, while the aluminum coating deflects electromagnetic waves. Depending on whether the material is placed on the inside or outside of a tent, it can reflect heat away or act as insulation.

“In the summertime, this material can go on the outside of a tent and reflect the intense sunlight away to cool the interior by five to 15 degrees Fahrenheit on average, depending on what the outside temperature is, and then in the wintertime, this material can be brought underneath the tarp or inside a tent to reflect body heat back inside the tent and warm it by five to 15 degrees Fahrenheit,” Totaro said.

Another benefit of the material is that its woven design allows moisture to escape and condense on its outside, reducing humidity inside the tent. According to Totaro, families in Moria said that when they used the tile, there was no longer a constant drip of water in their tent and they no longer woke up in a cold sweat.

There was clearly a huge need for their product in Los Angeles in all seasons, Totaro and Roed said. This year the Los Angeles Homeless Services Authority counted 41,290 people without housing in the city of LA as of Sept. 3, a 16.1 percent rise from last year.

After winning a $10,000 USC award and fundraising independently, Torch ordered 500 tiles to distribute in LA. The students and volunteers started by passing out tiles and water on Skid Row in partnership with Water Drop LA, a nonprofit also founded by USC students. This relationship led to connections with other organizations, including The People Concern, Street Watch LA and SELAH Neighborhood Homeless Coalition.

Gabriela Peñúñuri, a volunteer for Street Watch LA, found Torch on Instagram and contacted the nonprofit to partner and distribute their tiles. She said she received positive feedback from unhoused residents on the effectiveness of the product.

“Literally everyone I gave one to gave me positive feedback. And at that point, I let the folks at Torch know that this is something they definitely need to expand because the heat is not going anywhere in LA and homelessness is not going to be fixed in a matter of a year or two or five,” Peñúñuri said. “Obviously, the tiles aren’t a long term solution to our crisis, but it’s definitely something that’s going to improve the quality of life of these people.”

Peñúñuri lives in Silver Lake and said she is on a first-name basis with her unhoused neighbors, visiting them weekly. She said Street Watch LA seeks to build relationships with unhoused Angelenos and inform them of their rights, especially during “sweeps” by LA Sanitation and the Los Angeles Police Department.

“Homelessness is criminalized in our city,” Peñúñuri said. “So they’re just pushed around a lot or, you know, if they refuse to move, they’ll get arrested, and it’s a whole pain. So for us, it’s important that they feel like they are supported by their own community, and they know that there are people that care — that they’re still citizens, that they’re not second class citizens.”

Peñúñuri said her organization’s work has changed during the pandemic, because the city has mostly stopped doing sweeps. Now, Street Watch LA provides basic resources and access to showers and health care, so it made sense for her to distribute the heat-regulating tiles, Peñúñuri said.

“I think they gave us like 40 tiles to distribute, which went quickly because this was during a horrible heat wave in August or September,” Peñúñuri said.

Totaro said Torch recently raised an additional $13,000 in a fundraising campaign and ordered 1,500 more tiles. He said they will distribute 1,000 tiles throughout LA and the other 500 in large cities around the country. Potential destinations include Chicago, Detroit and New York City. Of the 1,000 tiles set aside for LA, Totaro said 500 will go to Skid Row and the other 500 will be distributed around LA, all in partnership with local organizations.

“This story is the same everywhere you go, whether it’s a refugee camp or on Skid Row,” Totaro said. “People are being overlooked and forgotten and institutions have just been structured in ways that favor certain people and leave others behind. And that’s not what science and engineering should do.”