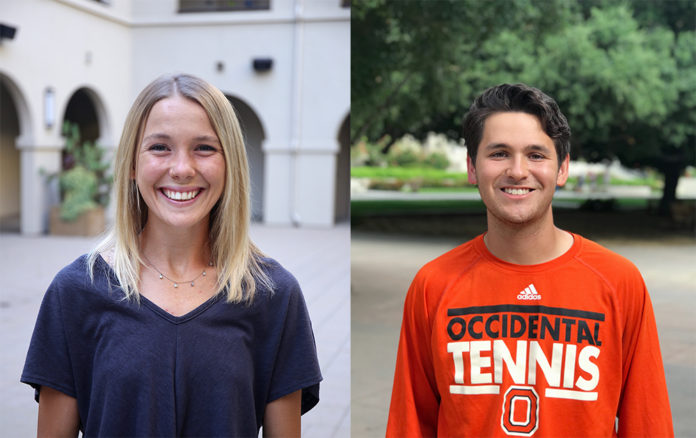 Stephanie Stamnes (senior) completed her fourth and final year of collegiate softball at Occidental College while preparing to enroll in medical school following her graduation. Reflecting on the things that carried her to the finish line of her student-athlete career, Stamnes said softball was instrumental in heightening her hard work ethic and time management skills.

“I think it’s prepared me so well for next steps and moving on,” Stamnes said. “When you’re an athlete and your day goes from waking up at 6:30 to go to lift and it ends at two in the morning in the library, I think that there’s a lot of lessons we learn from that.”

Stamnes said her interest in the healthcare field was brought about by her family’s involvement in foster care for infants with medical needs. She made the decision to pursue a medical degree her sophomore year of college, and by her junior year she had begun the process of preparing to take the Medical College Admission Test (MCAT).

“I had a two hour gap between two of my classes, and that was MCAT time,” Stamnes said. “I decided to do an extra two hours a day, five or six days a week [of studying], so Mondays were biochem days, Tuesdays were o-chem days, Wednesdays were psych and sociology days.”

Head softball coach Alison Haehnel said Stamnes’ big-picture mentality showcases how passionate she is about both medicine and softball, making her a leader not only in the classroom but on the field as well.

“Her teammates often seek advice and academic encouragement from her and have even nicknamed her ‘Dr. Stamnes’ because of her nurturing demeanor and her growing expertise,” Haehnel said via email.

Although going straight into medical school without a gap year has come at the expense of some sleep and social opportunities, Stamnes said the time she has spent with her teammates has taught her how to find joy even on her most stressful days.

“Four years of shagging balls with people and having conversations on bus rides and getting dinner after practice and going straight from the library to lift,” Stamnes said. “All of those little in-between times that are kind of what life is more made of are the things I’m going to miss most.”

In addition to the chickens, miniature horses, regular-sized horses, ducks, and goat Stamnes has already owned, she would choose to have a pet Capuchin monkey if she could own another animal.

Cameron Coe (senior) competed in the Division 3 III men’s doubles semi-finals in The Ojai 119th Annual Tennis Tournament with partner Lucas Chmielewski (sophomore) April 27. Coe is also approaching the conclusion of his student-athletic career. During his time at Occidental, he was the captain of the tennis team, an intern at a mutual fund in Mumbai, India and Resolution Economics in Los Angeles as well as an employee of NASA’s Jet Propulsion Laboratory. As the sole senior of the men’s tennis team, Coe also played the role of head coach after the departure of coach Rachel Manasse in August 2018.

“I was working like 30 hours a week last semester, so basically full time, and then classes and having to basically coach the tennis team, that was a lot of time,” Coe said. “Learning about time management and accountability and all these different things on the team were helpful, and I think I grew a lot of skills from doing all of that.”

Doubles partner Lucas Chmielewski (sophomore) said regardless of how hectic Coe’s work and school life may have become, he demonstrated a consistent level of care for and commitment to the development of his teammates.

“In the fall, he showed real leadership by gathering everyone to the courts everyday and running the practices,” Chmielewski said via email. “I think that’s what makes Cam one of the best captains in the world, because of this personal connection with each individual on the team.”

Although commuting between jobs, arriving to practice and leading the team in workouts left little time for Coe to focus on his own growth as a player, he said the leadership roles he had taken on in years past prepared him for this opportunity.

“It’s hard to be both player and coach, it’s hard trying to make sure everyone else is engaged at practice and making sure they’re all getting better,” Coe said. “I definitely think I’ve done better by having a team around me, it’s great to always have that support system and family group that you can always fall back on and rely on for really anything and will support you no matter what.”

Coe’s legacy extends well beyond the tennis court, as Chmielewski said Coe’s efforts throughout his career epitomized the meaning of student-athlete.

“He sets the bar very high for the team but also knows that school comes before tennis, which is a very important quality for a team captain,” Chmielewski said. “He sets an amazing example as a student-athlete, and I aspire to be a captain like him one day.”

Coe is an economics major and mathematics minor. After graduation, Coe looks forward to going backpacking in southeast Asia before embarking on a career in consulting, and his ultimate goal is to become a stay-at-home dad.