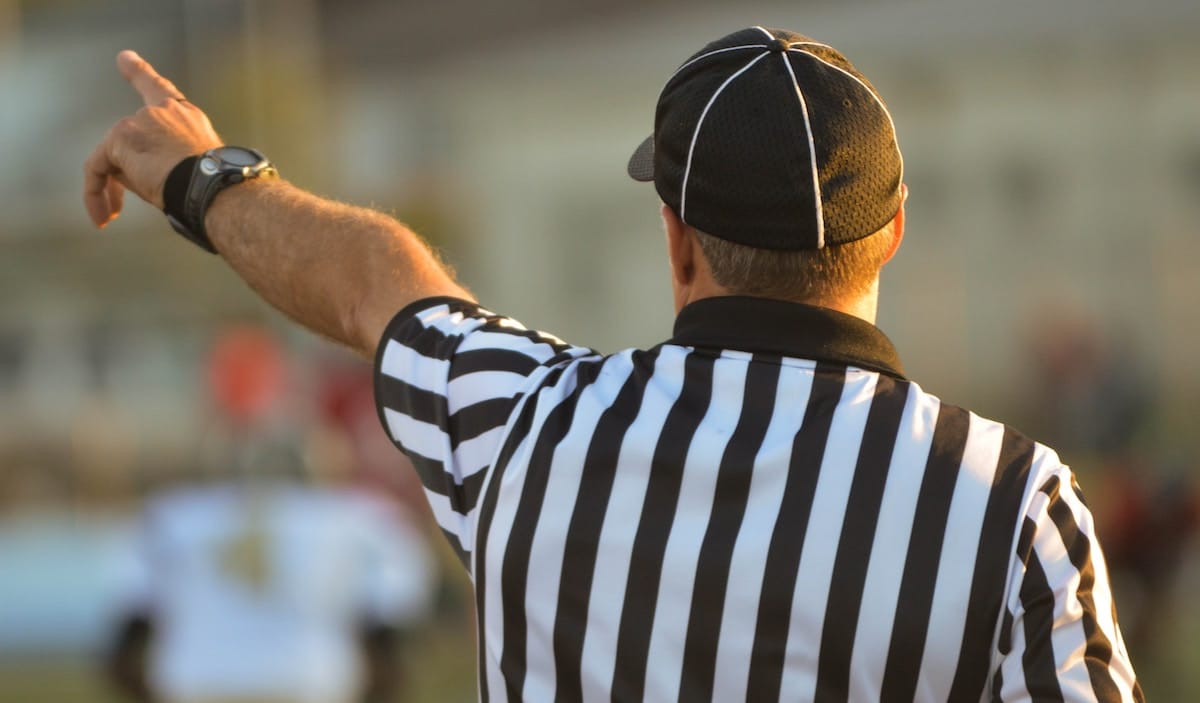 Referees are the worst. It doesn’t matter what you call them: refs, umps, blue, zebras, judge, “Sir,” “Mr. Official,” linesman, whatever. No one can make a game boring quite like a referee can. Flag this, whistle that and suddenly the game is moving at a snail’s pace. The worst part is, refs are terrible at any level. Regardless of whether you’re actually in the game or just watching from the sidelines, referees ruin the fun for everyone involved. I’ve always felt this way about zebras, but incidents in the National Football League and the National Basketball Association this year especially have given my contempt for refs a new fire.

The top two teams in the American Football Conference, the New England Patriots and the Pittsburgh Steelers, faced off for the top spot in the conference. With the Patriots winning by 3 and only 34 seconds left in the game, Steelers quarterback Ben Roethlisberger passed to tight end Jesse James about a yard and a half from the end zone. James falls to the ground as he reaches the ball over the goal line, clearly scoring the probable game-winning touchdown for the Steelers. However, as every scoring play goes under review, the referees headed to the instant replay. After conferring with the league office, the refs decided that even though the ball clearly passed the goal line before James lost control of it, the play was an incomplete pass, and the Steelers eventually went on to lose. While it’s true that James lost control of the ball as it hit the ground, the ball had already passed the goal line, and should, therefore, be a touchdown.

Control of the ball after passing the goal line has never been an issue in years past, as oftentimes players will barely get the ball across the line before having it swatted out of their hands. Hell, I’ve seen Carolina Panthers quarterback Cam Newton slam a ball onto another player’s helmet in an attempt to score the touchdown. If “Gronk spiking” into another man’s head still counts as a score, then James’ touchdown should, too.

In a pivotal game five of the first round of the playoffs in the Eastern Conference, the Milwaukee Bucks battled back to cut the Boston Celtics’ lead to seven points, and with 1 minute 30 seconds to go in the fourth quarter, it looked as though Milwaukee had a real shot at sending the game to overtime.

As the Celtics attempted to move the ball around and find an open shot, the Bucks played stout defense, and Boston could not find an open look. Eventually, Celtics guard Marcus Smart drove to the lane and kicked the ball to big man Al Horford standing just outside the 3-point line. However, because of the Bucks’ impressive defensive effort, Horford received the ball with only one second left on the shot clock. As the defender closed out on Horford, he was forced to pump fake and step to the left to gain an opening. But Horford didn’t get his shot up until a good two seconds after the shot clock had gone off. In what should have been an easy call, the referees botched it. Eventually, the Celtics were able to close out the game. I understand it’s tough to get every call right, but when a loud buzzer and flashing lights are right in your face, how can you miss that one?

Those are just two examples of the countless mistakes referees make in every game, across every sport. Sports are about the players, not the people in stripes on the sidelines blowing whistles every five seconds. A game with lots of calls and penalties is a game no one wants to watch.