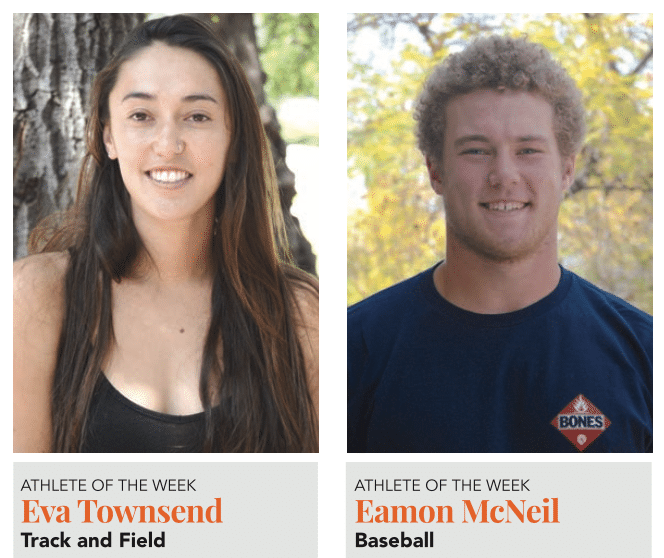 Eva Townsend (senior) broke her personal record by 14 seconds in the 3,000-meter steeplechase at the Bryan Clay Invitational at Azusa Pacific University April 20. The steeplechase is a long-distance race just under two miles that involves runners jumping over hurdles and sloshing through a water pit throughout the race. Townsend tried the event when she first joined the Occidental Track and Field team as a first-year.

“Track sometimes can be monotonous as a distance runner just running so many laps around the track, so I figured I’d give it a try,” Townsend said. “It keeps things interesting for sure.”

With this performance, Townsend moved up in the all-time leaderboards for Occidental women’s track runners in her event, going from ninth overall to fourth. According to assistant coach Mel Devoney ’17, even after such a large margin of improvement, Townsend supposedly showed little sign of fatigue after the race. Devoney noted that Townsend did not have to visit the training room for an ice bath and did not immediately kneel or fall to the ground after the race like the other racers.

“I think that’s really exciting that she knows she PR’d [personal record] by a lot, but she can do a lot more because that wasn’t hitting the bottom of the well yet.”

Going into this past weekend, Townsend said she was ready to give it everything she had at the SCIAC championship meet, mentioning that it would be the last races of the season and her career.

“I’ve had PR’s and I’ve improved a lot but I think I still have more to give, which is something I’ve been thinking as we go into the end of the season and the end of my running career,” Townsend said.

Townsend’s teammate, Sabrina Thurber (sophomore) said she was more than just a fast runner, but also a caring friend.

“I think everyone on the Oxy track and field team would agree that Eva is one of the most comforting people they know,” Thurber said via email. “She has a huge heart, and that is why everyone loves and will miss her so much next year when she is gone.”

Townsend placed third in the steeplechase at SCIACs this past weekend, part of a third-place finish for the Occidental women’s track team.

Townsend said her favorite food comes from Delia’s Cafe and that her favorite TV show is “The Office.” Her favorite professor on campus is Professor Fernández in the Spanish department. She said he is also a former runner, and that they bond over their shared experience.

Outfielder Eamon McNeil (junior) hit seven for 13 overall with four home runs and ten RBIs in the series against Pomona April 21. His home run in Game 2 occurred during a five-run outburst in the ninth inning, a pivotal point in the game that helped the team to win 10–9. McNeil played incredible games in the Pomona series at Pomona on April 21, according to teammate Jack Brancheau (junior).

“Eamon McNeil was obviously outstanding all weekend for us,” head coach Luke Wetmore said in a statement for the Occidental Athletics website. “This is one of my prouder days in a Tiger uniform. We badly needed to bounce back and our guys responded in a big way today.”

Both games improved the team’s overall SCIAC standing to 11–10, and their overall season record to 19–17.

“For our team to bounce back from a home loss on Friday and win two games on the road Saturday [April 21] was huge and spoke to the toughness of the team,” McNeil said.

The team has a super close dynamic and is like one big family, according to McNeil. Brancheau said everyone supports one another, through wins, losses and tough practices.

“Whatever happened on the field, we had fun doing it together and keeping each other going when it was tough,” McNeil said.

Following the Pomona series, McNeil was named SCIAC Player of the Week and selected to be on D3baseball.com’s Team of the Week. According to Brancheau, McNeil is a fantastic baseball player but an even better teammate.

“Eamon is an incredible player who always puts his teammates before himself,” Brancheau said. “He is the first one to pick you up if you’re having a rough game and the first one to compliment your success.”

Looking ahead for the remainder of the season, the team will need to win at least two or three more games to make it to playoffs, depending on other SCIAC results. Game 1 of the following series is at Chapman, and Games 2–3 are at Occidental’s Anderson Field.

“For next year’s goals, I think the sky’s the limit with our team,” McNeil said. “I just want [the team] to play relaxed, confident and have fun for the year.”

McNeil is a geology major and a linebacker for the football team at Occidental. One of his favorite foods is a Double-Double from the California classic In-and-Out.