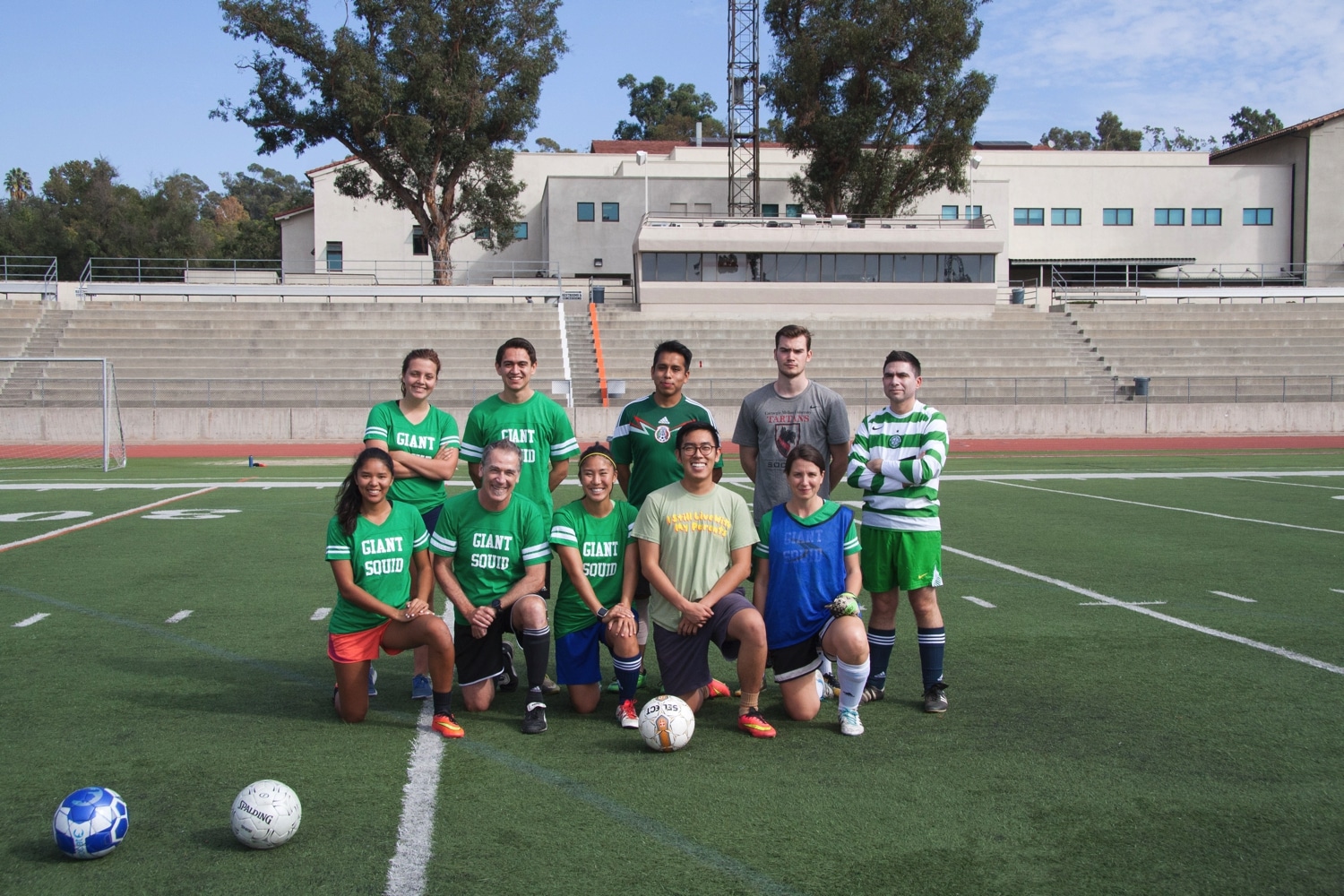 Five years ago, Professor Jamie Angell of the theater department formed a faculty and staff intramural soccer team named the Giant Squid. The team competes against the 14 student teams in Occidental’s 5v5 intramural league and is open to all faculty and staff on campus. The current roster pulls from academic and staff departments across campus, including religious studies, math, Comparative Studies in Literature and Culture (CSLC), theater, geology, biology, Residential Education Housing Services (REHS), Facilities and Upward Bound.

According to Angell, the athletics department’s open invitation 5 years ago to faculty and staff to join the intramural league prompted him to form the team. Angell had experience creating recreational teams in high school and had previously played recreational soccer in Pasadena, sometimes with or against other Occidental professors.

“I just wanted to continue to play soccer,” Murayama said. “It was hard for me to go into coaching and not being able to run out onto the field and play.”

According to Zellmer, the team is competitive while keeping spirits high. The team may look official with their green squid jerseys, but the players see it as a fun way to spend their Sunday. The mood is relaxed — there are no set positions and different players show up to play each week.

“We know that we probably won’t win most games so we go into it with an attitude that we’re here for fun but take it seriously in that we show up, commit to the team and continuing it from year to year,” Zellmer said.

Last year, the team advanced to the intramural finals. Angell credits their victories to two research assistants who formerly played on Occidental’s women’s team, whose names Angell could not recall. According to Murayama, the level of team intensity varies from game to game, depending on who they are playing and the competitiveness of the opposing student team.

“It depends on who you’re playing because sometimes you’re matched with students who are really competitive and talented,” Murayama said. “Our games are usually so casual that they feel more like a pickup game.”

Murayama also credits the team for fostering connections and friendships among faculty across campus that she may not have formed otherwise. According to Zellmer, this intramural team is similar in this manner to the summer softball league and Occidental Noonball tradition, which also bring faculty and staff together. Noonball is a weekly pickup basketball game between Occidental students, professors, faculty and staff. Zellmer said that what sets intramural apart is that the faculty and staff play students rather than each other.

Angell, Zellmer and Murayama all said that playing on the intramural team has allowed them to interact with students outside of their professional capacities. In their last game, Zellmer advised a student referee about her upcoming registration for the spring semester while on the sidelines. Although Murayama works directly with Residential Advisors (RAs) as a GHC, she said that she can interact with them in a more relaxed setting on Sundays. Angell describes the league as a self-selecting social gathering that people go to because they love soccer and want to have fun, no matter their role on campus.

“I think that there should be more opportunities like this, to interact with students outside of a student-professor relationship but working alongside them in a non-academic setting,” Angell said.

Angell said that despite the team’s current full-sized roster, they still struggle to gather the required five players needed to field a team for intramural soccer, which has forced them to forfeit in the past. Unlike students who live on campus, Sunday games can be more difficult for faculty and staff members to attend, as they often have conflicting family obligations. According to Angell, the team is always welcoming new players.

“There’s only one team of old people and that’s us,” Angell said. “It’s pretty hilarious so you do not have to be good, you just have to be willing to play.”