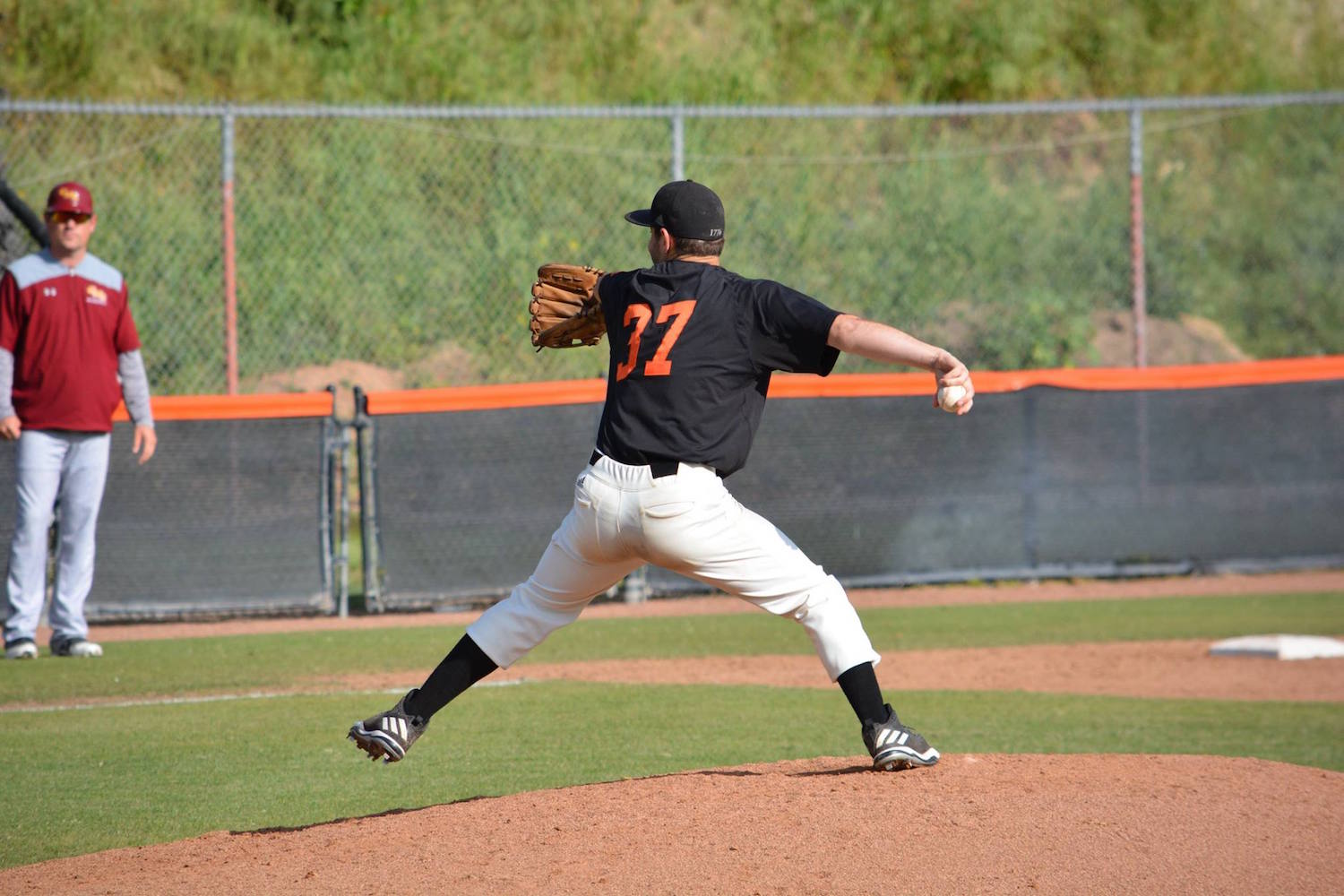 Nolan Watson* (senior) gave the Tigers (18-9) a gem on the mound last Friday, pitching the team to a 16-0 win against Claremont-Mudd-Scripps (CMS) in a mercy game of seven innings marking the 20th no-hitter in Occidental baseball history.

After suffering a shoulder injury at the beginning of the season, Watson has been regaining strength and confidence with each practice.

“I’m not sure whether that performance was an accumulation of these past few weeks of recovery training or just getting the most out of practice, but it feels like a huge step forward,” Watson said.

The final out proved to be a wild ride for the Tigers. CMS right-fielder Henri Levenson attacked the first pitch Watson sent his way and popped it up over first base for an ostensibly easy final out. Throngs of teammates gathered at the dugout’s exit to storm the field while the ball was still in the air, but the Tigers’ first baseman Devon DeRaad (senior) and second baseman Graham Pimm (senior) called for the ball simultaneously. With neither player hearing the other, the ball dropped between the two in fair territory before bouncing foul just in front of first base. Had either player touched the ball, or had it bounced behind first base, it would have been the first hit of the game for CMS. Instead, it was just another foul ball. With a second chance at history, Watson and the Tigers executed, forcing a pop-up on the next pitch that was caught by catcher Jared Baur (sophomore) for the final out.

“One of my favorite parts of the game was catching the last out, it was a really symbolic way to end it for me and good closure because I feel just as involved in it as Nolan was as the pitcher,” Baur said. “It’s always awesome to catch a game with no hits and after the last play, we all came together to celebrate.”

Watson, a four-year starting pitcher for the Tigers, has come close to no-hitters in the past, but said that this is the first one he’s thrown since little league.

“I’ve had good outings before,” Watson said. “There are so many things that could go wrong and most of them are out of my control so I always just worry about executing my own pitches the best I can.”

The Tigers played a three-game series against CMS last weekend. In a doubleheader Saturday, the team suffered a 5-3 loss in the morning but rolled out another 6-1 win in game three.

Head Coach Luke Wetmore lauded Watson’s focus and endurance despite long offensive innings and a fair share of distractions throughout the game.

“In baseball, the clock never runs out of time, and absolutely no lead is insurmountable,” Wetmore said. “All you can do as a pitcher is focus on making the next pitch. Nolan did a tremendous job of that, despite the circumstances and some interesting plays behind him.”

In the days following his outing, Watson has been named the SCIAC Athlete of the Week, placed on the D-III National Team of the Week and was named honorable mention for National Player of the Week by the National Collegiate Baseball Writers Association. The senior ace currently holds an earned run average (ERA) of 2.25 and averages 9 strikeouts per nine innings — good for top five in both stats in the SCIAC.

“It was vindicating to get out there and succeed, but we definitely have a lot more to come ahead of us,” Watson said.

The defending SCIAC champion Tigers are in first place in SCIAC baseball standings with an 11-4 record. They take on Pacific University (OR) for a non-conference series beginning April 7 at 7 p.m.

*Watson is a sports editor for the Weekly.