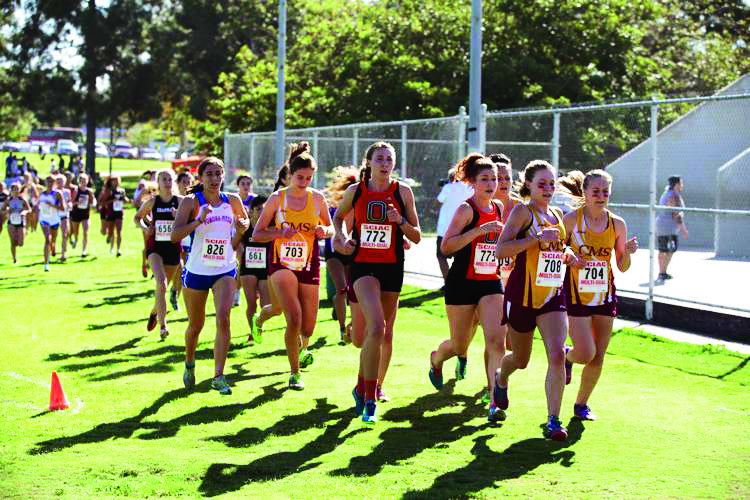 Despite an early tangle-up throwing a wrench into the team’s outlook at Nationals, Occidental’s men’s cross country squad left the track a proud and undiscouraged unit.

Occidental’s men’s cross country team competed in the NCAA Division III Cross Country National Championship Nov. 19 for the first time since 2011. The team sent all of its men with women’s standout Roxanne Valle (sophomore), who broke through as the first Occidental woman to qualify for Nationals competition since Megan Lang ’12 accomplished the feat back in 2012. Valle finished 142 in the women’s 6k, completing the race in just over 22 minutes.

Unfortunately, the race did not quite go as well as expected for most of the squad. Within the opening moments of the race, Occidental runners Brody Barkan* (sophomore) and Austin Sankaran (junior) fell to the ground after the latter inadvertently tripped over his teammate’s spikes. The tangle-up left both runners with a fair share of bumps and bruises, but they did not have time to stop and tend to themselves. The collision also provided an unexpected obstacle for the rest of the runners, each of whom angled to maneuver past the pile-up and maintain his initial pace.

“We had some tough luck today with a runner going down right in front of me, about 200 meters into the race, as the field started to bottleneck,” Keenan Leary (junior) said via e-mail. “The rest of the pack got caught up in the mess and it hurt our start a bit.”

Despite the unforeseen difficulties, the team was not discouraged. Barkan and Sankaran set a powerful example for the rest of the team, pushing past the early mishap to complete the race, putting a resolute stamp on a competition that threw everything it had at the young runners.

“Austin hit the ground hard and I also fell and had to recuperate, having gotten spiked through my toe,” Barkan said via e-mail. “It really made it tough to get back in the race, but I’m proud of Austin for getting up and working with the situation at hand.”

Leary, the lone Occidental men’s runner fortunate enough to avoid the early spill, managed to place 112 among all 300 competitors at the event, finishing the 8k in 25:28:02. He left the tournament with a greater appreciation for his teammates, maintaining that the past week’s challenges made him that much more eager to return to the track next year.

“Considering we had no guys that had ever competed in a national championship before, it was a good learning experience,” Leary said. “We return our top five runners next season.”

Leary’s eager outlook is largely thanks to Bartlett’s insistence on instilling a culture of positivity and camaraderie between his runners. The collaborative approach is a major reason the team was able to maintain its composure and enthusiasm throughout the grueling race.

“Although the national meet didn’t go perfectly, it was a wonderful learning experience for the team,” Bartlett said. “The experience they gained will make us a stronger and more confident team next year. I think we’re all already excited to get back to work and see what we can do in the future.”

A bright future awaits Bartlett and his returning cast of spirited young runners. If the group is able to maintain its current trajectory, then future trials and tribulations will not knock them off their path.