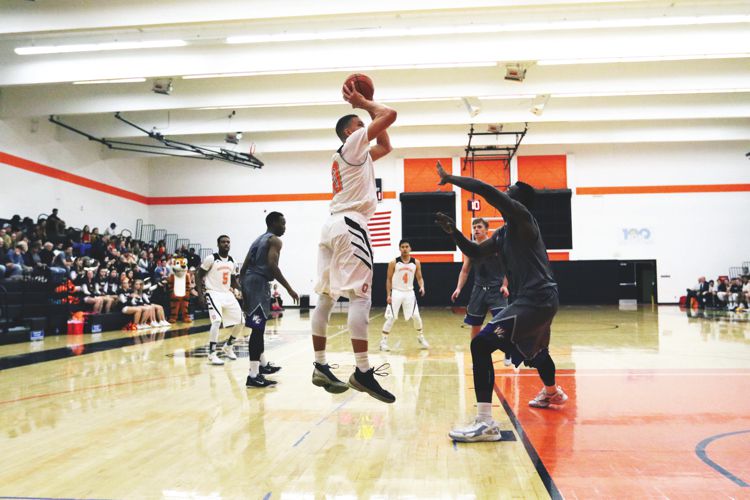 Coming off last year’s 12-13 campaign, men’s basketball head coach Brian Newhall and the Occidental Tigers began the 2016–17 season with nine new faces in the mix in “a move towards positionless basketball,” which emphasizes versatility and positional balance across the roster. The philosophy, increasingly prevalent in modern basketball, is a nod to legendary UCLA coach John Wooden.

The emphasis on quickness and balance are inextricably linked in Newhall’s view. The new approach represents a more discretionary approach to basketball — one where the team aims to put pressure on the opponent without gambling away its control over the pace and tempo of the game.

“For three previous years, we’d run the dribble-drive and pressed the entire game,” Newhall said. “Last year was year one in what we’ll call the UCLA-John Wooden transformation, where we play a little more sound basketball. We’re keeping pressure, but we don’t steal the dribble, we steal the pass. We try to wear people down. So it’s much less frantic and much more sound.”

A more sound, controlled approach to the game has the potential to strengthen this team, which just last season lost three different contests in which they held a lead with less than 10 seconds to go. These mishaps at the end of games can make or break a season.

“Be quick, but don’t hurry,” Newhall said. “We have extreme clarity with what exactly we want each player to do. So can our quickness stay quick? Can we play the last five minutes as we do the first four minutes?”

Whether or not Newhall’s scheme will be executed as planned hinges on the efforts of his players. None are more crucial to carrying out his vision than Jay Miller and Andrew Johnson, two all-SCIAC seniors who together accounted for nearly 58 percent of the team’s points in conference games last season.

“We’ve been working hard and putting in a lot of time to get in shape so we can sustain this brand of basketball through the season and I’m very optimistic that things will fall into place and be a great year for Oxy basketball,” Miller said via email.

The upcoming season will be the last time the pair dons the Occidental jersey. Miller started all 25 of the Tigers’ games last year, averaging a SCIAC-best 19.9 points per contest.

“Personally I’m just trying to have fun and enjoy every minute I play this year,” Miller said via email. “It’s my last chance to wear this jersey so I’m going to make sure I leave it all on the floor this season.”

Associate head coach Mike Wells elaborated on how important Miller and Johnson have been for the team. He expressed his admiration for the way the duo conduct themselves off the court as members of the Occidental community.

“AJ [Johnson] and Miller have been the backbone of our program for the last four years,” Wells said via email. “You can’t find two better people. It’s a bonus that they’re good basketball players too.”

Wells hopes that this new team can work toward their potential before the team faces conference opposition in January. The Tigers’ first action of the season came Nov. 6 in an exhibition against Cetty Universidad, where the Tigers dispatched the Mexican team 57-48. They start their conference schedule against Cal Tech in the first game of the 110 freeway rivalry Nov. 15 in Pasadena.