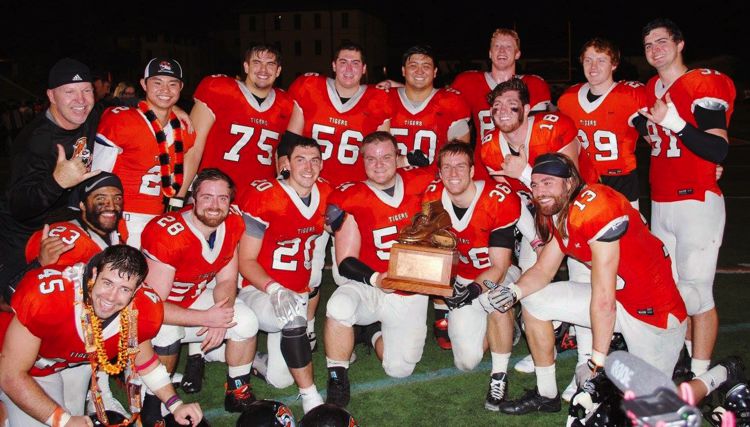 The Occidental football team faced off against Whittier College Oct. 29, continuing a rivalry dating back to 1907. The Tigers’ offense came out in full force from the start, routing the Poets in a 56-38 victory backed by 431 total offensive yards and eight touchdowns.

As the final seconds ticked away, the Tigers victoriously hoisted one of the more unconventional trophies in college football — a bronzed pair of cleats. The backstory of these cleats, along with the football team’s annual antics leading up to the game, make for one of the most peculiar rivalries in all of D-III sports.

The shoes in question once belonged to Whittier All-American running back Myron Claxton ‘40. Before the game in 1939, a group of Occidental players stole Claxton’s shoes in an effort to slow him down on the field. Their efforts were in vain as Claxton led Whittier to a 36-0 victory while wearing a pair of work boots. After the game, Claxton went over to the Occidental sideline, grabbed his cleats and took them home. Years later, the Franklin Society, Whittier’s oldest fraternity, bronzed the shoes and made them into a trophy. The shoes are taken home by the victor in the same way that Claxton took his after the win.

If the story behind the shoes is quirky, the traditions of Occidental players in the week of practice leading up to the game get even stranger. This is especially true for first years who have never encountered the mysteries and hi-jinks that have grown to define the team’s preparations for the annual rivalry.

The week starts with the haunting of new players by a mysterious and unexplained ghost named “Hector.” Head coach Doug Semones explained how the week begins with Hector leaving the letter “H” on every newcomer’s locker with athletic tape.

“I come in in the morning and all the freshman’s shoes are tied in an ‘H’ pattern,” first-year quarterback Josh Greaves said.

Upperclassmen reinforced his confusion, explaining that it was all Hector’s doing. Semones described the week of practice as constant chants of “The Shoes!” echoed by cries of “Hector!” These echoes loomed over every drill as a reminder of the stakes they faced on the coming Saturday. According to Greaves, the trophy was on display at every film or practice to motivate the players. These oddities only continued to build throughout the week and came to a climax early Thursday morning.

“They staged this kind of fake fight,” Semones said. “Everybody’s in on it except the freshmen, and the new coaches too.”

One of the defensive players pretended to take an illegal hit on a defenseless place holder in an effort to spark the altercation.

Many players, including Greaves, were legitimately concerned about the sizable brawl between teammates, but those fears quickly subsided.

“They were just trying to take my shoes off,” Greaves said.

A review of practice film showed players running in a panic across the field, getting tackled by pursuing teammates who then pulled the cleats off their feet. Once the chaos died down, practice ended and players returned to the locker room. They were met by an alum dressed as Hector. The specter wore a helmet with eye black surrounding his eyes. In a loud and deep voice, the ghoul read a story of the legacy and lore surrounding the Whittier rivalry.

Despite its longevity, the rivalry of the shoes continues to create fond memories for the Tigers. Defensive backs coach Ryan Rodriguez ‘12 recalled his favorite shoe game memory: last year’s matchup.

“We had come off some tough losses the weeks before, and then we came out and destroyed them,” Rodriguez said.

Tigers quarterback Bryan Scott (senior) also experienced the magic of the shoe game after a win his sophomore year. Scott recalled that Whittier had to pass the shoes over to the Tigers, which led to a raucous celebration from the team.

With Hector in attendance on Saturday, the Tigers were able to retain the shoes and continue the superstitions and traditions that have become as integral to the rivalry as the trophy itself.