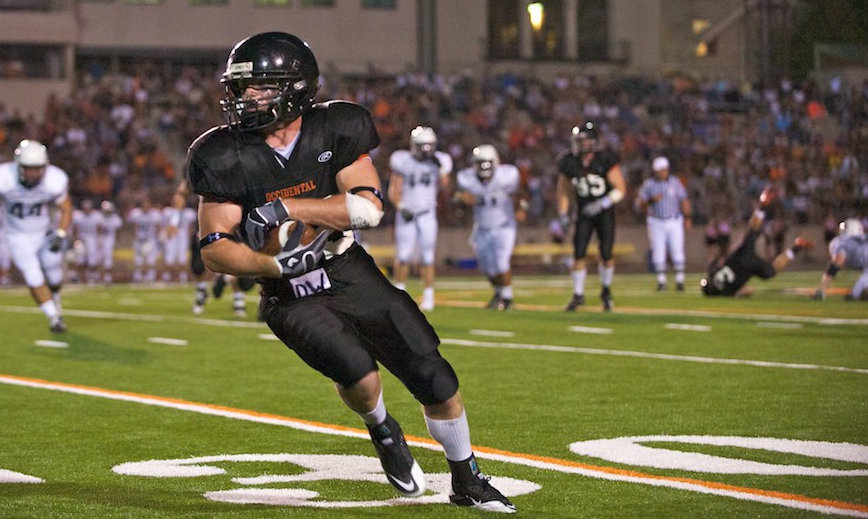 Last week, we previewed the Occidental football team’s offense in anticipation of the conference opener against Redlands on Oct. 1. This week, we took a look at the defensive side of the ball and recognized the Tigers’ stand-out defensive performers.

This year’s football squad faces the tough task of rebuilding a defense that was filled with talented seniors during the 2015 season. Defensive back Nicholas Mungia ’16 was s huge asset for the Tigers defense last year, leading the team in tackles with 37, and tying for team lead in sacks with 2. Casey Dudley ’16 was another valuable veteran presence on the Tigers’ defense in 2015, racking up 34 tackles and a team–leading 2 interceptions. The Tigers will attempt to replace linebacker Devin Chapman ’16 who tallied 28 tackles, including 4.5 tackles for loss, and a forced fumble in his senior campaign.

The Tigers have given up a total of 94 points through two games this season, starting 0-2.

“After the first two games the Defense needs to improve by not giving up big plays, getting off the field on 3rd down and producing some turnovers.” Occidental football Head Coach Doug Semones said.

“Our goals (this year) are to win the SCIAC, keep the drum and the shoes,” Semones said. All three of these goals are still attainable for this 2016 Tigers football team according to the Tigers’ head coach.

Last season, the Tigers picked up 90 yards per game in penalties, making them the most penalized team in the SCIAC by more than 20 percent.

Figure 1. Average penalty yards per game for SCIAC schools during the 2015 season.

“Penalties happen because you lose your focus and abandon your technique. With the SCIAC officials being so inconsistent, we need to play at a high level every play.” Semones said.

In an effort to evaluate the consistency of SCIAC officials, we looked at how penalized each SCIAC team was over the past four years, and found that penalty yardage doled out fluctuates wildly year to year.

The Tigers went from accruing the fewest penalty yards in the SCIAC in 2014 to the most in 2015. Over the four years of SCIAC penalty data available online, teams frequently go from first to last, and fluctuation is the rule rather than the exception. This variation combined with the lack of any apparent trend, lend statistical credence to the notion that the Tigers may have simply been victims of bad luck and inconsistent officiating last year.

Semones also stated that he hopes the defense can start creating more pressure on the opposition by forcing turnovers. Last year the Tigers forced a total of 16 turnovers, while losing only 12. This was good for a turnover ratio of .75, on par with top SCIAC teams for the 2015 season.

Figure 3. Table of giveaways versus takeaways (and the corresponding turnover ratio)

So far this year, the Tigers defensive unit has yet to force a turnover, putting them below their average of 1.6 turnovers forced per game. Favorably, the offense has limited giveaways to three over the first two games, indicating that Tigers fans can expect a solid turnover ratio again this year. Precise offense, combined with an increased focus on forcing turnovers on defense, could be the keys for the Tigers going forward in conference play.

Despite losing the veteran core of the defense, the Tigers have rebuilt quickly. Leading the charge is linebacker Marcus McDuffie (junior). Last season, McDuffie played in all nine games, recording 27 tackles — three for a loss. This year he has hit the ground running, picking up a team leading 17 tackles, with two for a loss, and one sack in two games so far this season. McDuffie looks to be primed for a breakout junior season leading a young Tigers defense.

Another piece of the Tigers defense came around this off-season in the form of linebacker Eamon McNeil (sophomore). McNeil, a high school football standout, spent his time last year playing for the Occidental baseball team. McNeil felt compelled to try out for the football team this fall, and his decision seems to have paid off so far. He is currently second on the team with 12 tackles through two games. but he feels that there is room for the defense to improve.

“Our failure to commit to executing at a technical level really got exploited when we played Pacific. We missed way too many tackles,” McNeil said.

Still, McNeil and the defense are confident leading up to the start of conference play. The sophomore out of Portland, Oregon asserted that the team’s mistakes can be fixed easily — something he found frustrating.

“The fact that the mistakes are easy to fix is both encouraging and frustrating,” McNeil said.

Given the team’s offensive performance and potential defensive improvements, there is a lot be optimistic about for the Tigers. The Occidental offense is a well established force within the SCIAC, and the defense boasts a solid mix of veteran leadership and young talent. With a little bit of luck — and a lot of determination — this 2016 edition of Tigers football begins their march towards their goal of a SCIAC championship.