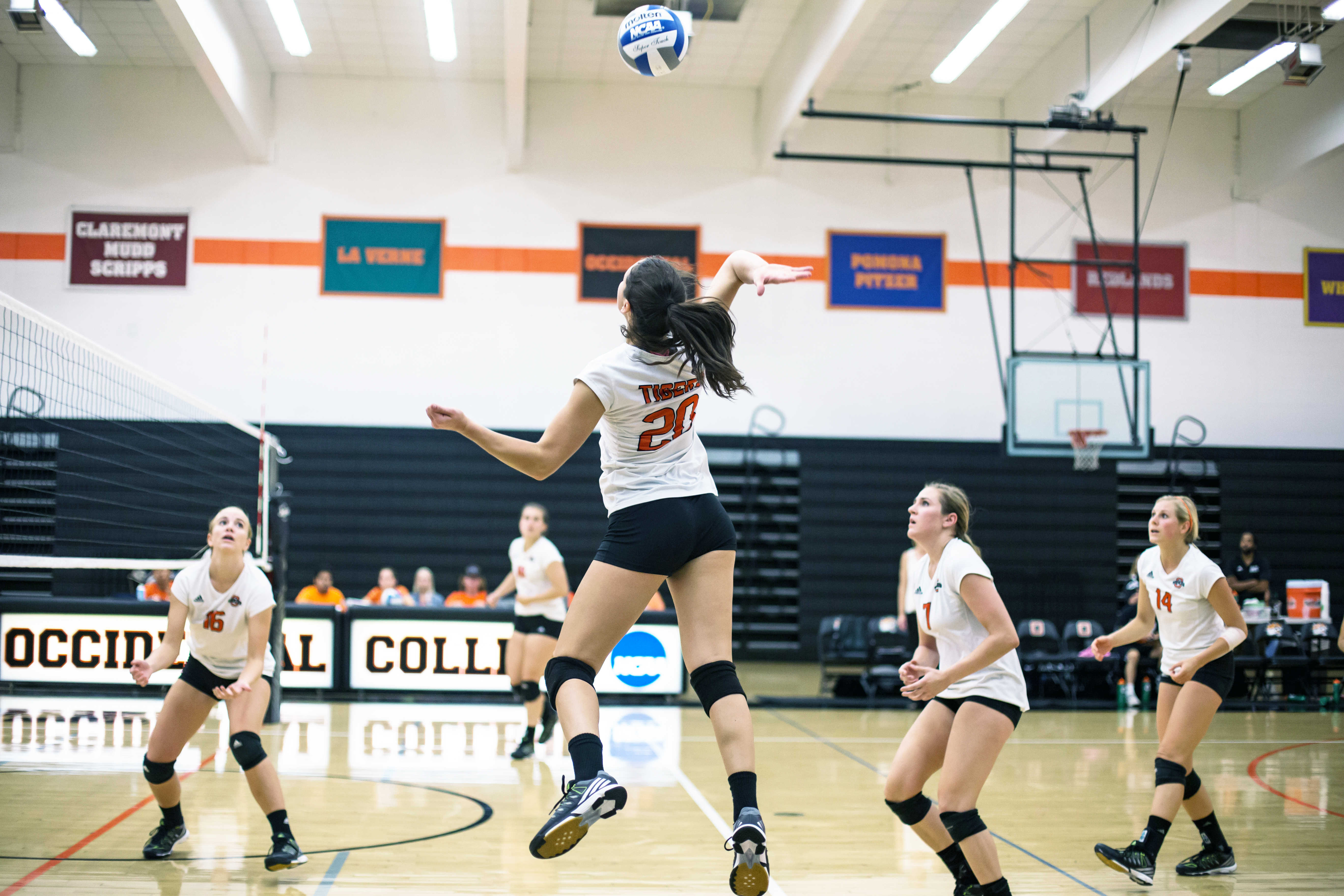 Hannah Wagner, a sophomore transfer student from NCAA Division I Lehigh University, joined the women’s volleyball team this fall. Wagner’s decision to transfer to the DIII Occidental college has allowed her to make an immediate impact. Starting as an outside hitter, Wagner helped bring home a win against Chapman University Sept. 24 with 10 kills on .364 hitting.

Wagner attended Lehigh after a successful career at Bainbridge Island High School, where she won Most Valuable Player and first team all-conference honors. While at Lehigh, she played in 42 matches and 22 sets in her first year. She played a memorable game against College of the Holy Cross last fall with a season high of nine kills.

Head Coach Heather Collins discussed how Wagner is the first transfer student to join the volleyball team after being vetted by both admissions and the coaching staff.

Senior teammate Tiareh Cruz discussed how she had not played with any transfer students in her past three seasons at Occidental, and the frustration of seeing other teams in the conference add Division I talent.

“The addition of Hannah to our team was crucial, and I feel unbelievably fortunate to be able to play with such knowledge and tenacity, even if it is for only one year,” Cruz said.

Wagner decided to transfer to Occidental after she began to feel restrained by the time commitment of Division I sports. She felt it took away from the opportunity to pursue her other passions and to focus on academics.

As a cognitive science major — who is considering pursuing a second major in psychology — Wagner has found the academic support and opportunities she desired at Occidental. Wagner was surprised to hear that attending a professor’s office hours was an acceptable reason for missing practice. She has appreciated that her coaches at Occidental truly care about the education of their athletes. Collins supported her sentiment.

“All coaches are different and have different expectations, but I knew coming in that academics are number one to students,” Collins said. “If they need to go to office hours, study sessions or tutoring, we always accommodate for that since we know academics are first and foremost their main responsibility.”

Wagner hopes to take advantage of this more lenient schedule and join the track team, something she is ardent about but has not had the time to pursue.

Wagner observed the differences in relationships that spawn from sports culture at Division I and Division III schools.

Occidental’s supportive environment has grown on Wagner, who says that coaches want players to feel confident in themselves and also to maximize their potential. She also enjoys more personal relationships with the coaches at Occidental due to the smaller team — a stark contrast from her time at Lehigh.

Collins is deeply appreciative of the addition of Wagner to the team.

“It’s always great to get someone with Hannah’s experience; it is inspiring to the team,” Collins said. “She is someone who works hard, leads by example and is an all-around great volleyball player.”

According to Collins, Wagner has quickly bonded with her fellow players. Teammate Claire Strohm (junior) reaffirmed this connection.

“The team couldn’t be happier that such a talented and competitive player entered our family this year,” Strohm said. “Hannah has been nothing but a positive impact on our team and we cannot wait to see what she brings to the Oxy Volleyball program over her next three years here.”

Wagner feels optimistic for the rest of the season and believes the team has great potential. She believes they will be able to stand toe-to-toe with some of their toughest competition such as conference rival Cal Lutheran — ranked number four in the country (according to NCAA coaches poll).

Wagner and the Tigers will travel to Thousand Oaks September 27* to take on the Regals.

*Game in progress at the time of publication.

Sports can still be influential, even if they’re not being played