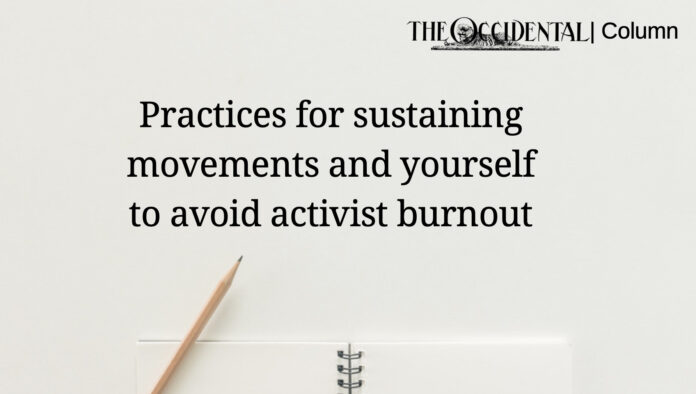 To end the injustices that permeate our local, national and international communities, we need movements — not martyrs. A culture of selflessness to the point of self-sacrifice runs rampant in many organizations and movements, causing burnout in individuals and stalling the momentum of their causes. To maintain the movements we care so deeply about and to protect ourselves and our passion, we must adopt more sustainable social organizing practices.

Burnout is the decline of well-being combined with feelings of hopelessness. Psychologist Herbert J. Freudenberger coined the term in 1974 in connection with one’s professional life, but it has bled into activist culture even among those who aren’t full-time organizers or activists. The individual consequences of burnout can be intense and have physical, emotional and psychological effects that ultimately force many people out of organizing work. Movements suffer when they lose the passion and wisdom of seasoned activists, which is why it is critical we sustain ourselves to maintain the movements we care about.

Sustaining oneself goes far beyond the “self-care” indulgences that consumer culture is trying to sell to you. There is nothing wrong with enjoying baths and chocolate, but these alone are rarely enough to fortify underpaid activists who are staring down the dragon’s maw of problems to be tackled. It is critical that we celebrate successes and go beyond the bare minimum of self-preservation in order to continue to participate in activist movements.

For organizations, one of the most crucial factors in retaining activists is fostering a sense of accomplishment. Winning battles for social justice can feel fruitless, like cutting the heads off a hydra: each problem, once confronted, is replaced by two more. But societal problems aren’t the heads of hydras. There is an end to the ills if we can continue to believe that we are capable of getting there. Yes, there will always be more work to do, but one day that work might be teaching and learning from history rather than changing it as it happens.

Another key component in maintaining individual commitment to activism is allowing yourself to take breaks to heal and replenish the reservoirs you pull from when engaging in activist work. We all deserve space away from topics that weigh on our hearts.

There are some who oppose taking breaks on the grounds that doing so taps into an unfair system of privilege that is not accessible to everyone. But space to heal is a right. The fact that it is not accessible to everyone is unjust, but we should not practice self-flagellation just because there are others in the world who suffer disproportionately more. We must work to end everyone’s pain –– and we can start by minimizing what we inflict upon ourselves.

As Quita Tinsley, a Black, queer, fat femme contributor to “The Body is Not an Apology” writes, “The reality is that we live in a society built on oppressive systems that constantly work to maintain power and break down marginalized people. Self-care is not some cute utopian inspiration for how to lead my life, but a tool to ensure that I’m not being broken down by the systems in place.”

In my own experience as a trans person, self-care may mean affirming myself by correcting those who misgender me. It may also mean letting transphobic comments roll off my back sometimes. Am I doing a disservice to my trans siblings by doing so? Perhaps. But I must remember that I am among those trans people I want to protect, defend and support. I cannot and will not fight every battle because that is not sustainable.

Not every battle has to be a boss fight. Changes happen at every level, whether it be donating a few dollars here and there to bail out protestors, volunteering to distribute necessities to houseless community members or calling your elected officials. Join communities that care about the same causes as you, find proof of your efficacy and remember: you are not alone in these fights. You don’t have to save the world on your own.