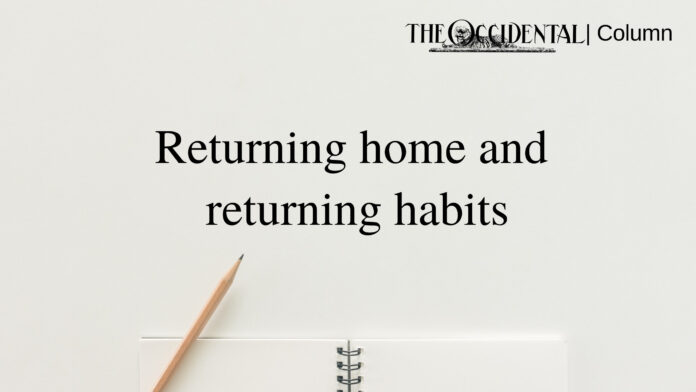 The months after being sent home from Oxy haven’t been just a return to a place, but also a return to a mentality. Not a good one, either.

I lucked out as far as my home life goes: I have a loving family whose breadwinners were able to keep their jobs during the pandemic and have thus been granted a sense of emotional and physical security I know not everyone has. I wasn’t quite so lucky with some other things: genetics and experiences of trauma and whatnot.

High school was marked by my messy attempts to manage the unsubtle emergence of a mental illness passed down for generations, as well as silently process trauma and hide a burgeoning collection of self-harming behaviors. My daily life was punctuated by panic attacks and I was constantly cleaning up the aftermath of whatever unhinged course of action I took in a state of heightened volatility.

Getting into college was a shocking inevitability. On the one hand, I come from a college-educated family that could afford for me to continue school and who expected it of me. On the other hand, I never really expected to live long enough to receive my acceptance letters. But there I was –– alive and, somehow, ready to go to college.

Oxy didn’t magically transform me, but the new environment did offer me a fresh start. I sought out institutional support, made friends I would come to rely on, continued individual and group counseling, found a medication combination that worked for me and became an upstanding, involved student. I still had more than my fair share of bad days –– those come with the chronic mental illness territory –– but I had genuine faith in my capacity to thrive despite them.

In my three years on campus, I got used to that luxury. The abrupt return home in the spring didn’t destroy my years of progress in one fell swoop. It wore them down like chalk crumbling as it grinds down on a Fowler Hall blackboard. It was steady and subtle until suddenly it was absurdly self-evident: I was not okay.

Thought patterns I hadn’t had since high school permeated the air of my bedroom, filling my lungs in my sleep and clogging my brain when I awoke. Old habits reemerged with new strength. The structure I had taken years to meticulously develop collapsed.

I had a hard time admitting this to myself, but home is triggering for me. Part of me wants to downplay that for the sake of those who share this home with me, but our experiences of this house are not the same. All the love I have here does not erase that it is the scene of many harms I subjected myself to –– ranging from silence to violence.

That love and that violence can and have coexisted in my life. I cannot simply love the pain away. I cannot hide triggers behind new memories. For me, healing is a decision and it demands intention and action.

I always think I’m trying to heal, but sometimes healing requires more effort than I’ve been putting in and that’s when I’m reminded that healing is work. This summer, that work has been going to an eating disorder support group and finally mustering the courage to tell my parents I was going –– and that I was in recovery from an eating disorder in the first place. It’s been taking screenshots of kind words my friends have texted me so that I can read them on those late, lonely nights so I no longer feel so desperately alone.

It’s also been admitting when I can’t detangle an object from its triggering associations. My bedroom was a lost cause, so I took over my sister’s. The new space doesn’t remind me of panic attacks or frantic phone calls or self-harm or really anything at all.

These types of solutions aren’t accessible to everyone, and I’m lucky they were accessible to me. Before I could access them, though, I had to conceptualize them. I was too scared and feeling too trapped to recognize that there were any solutions to be found, and I was incredibly fortunate to have friends who pointed out the possibilities.

When we find ourselves in drastic situations, stuck in the past, we need drastic, bold reimaginings of our futures. From the bottom of the well, it’s hard to imagine climbing your way out. Without my friends on the outside looking in, I would be stuck in my old room, resigning myself to exhausting cycles of harmful behaviors. They imagined for me when I needed it, and I will do my best to return the favor when the time comes.

The author for this piece is Junko Anderson, a member of a chapter of the organization at Occidental College. Active Minds is a national organization that aims to reduce the stigma surrounding mental illness and promote good mental health.