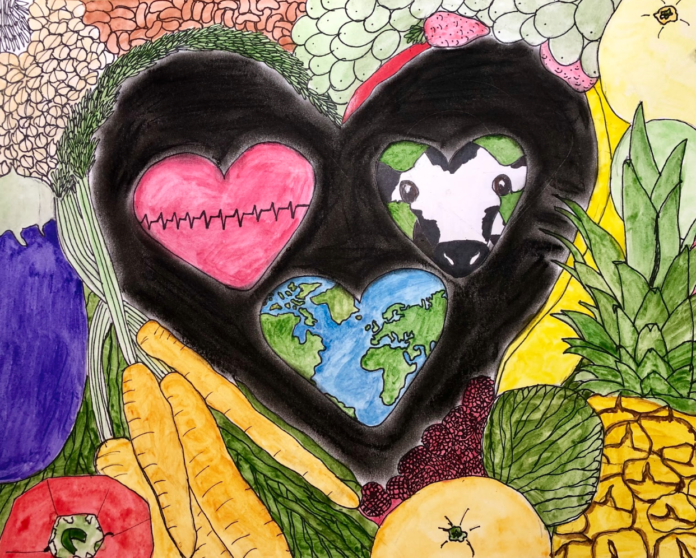 Each year, more than 9 billion animals are killed for human consumption in the U.S. alone. The Intergovernmental Panel on Climate Change (IPCC) published a report in 2018 outlining the damage that man-made pollution has caused to the planet. Since industrialization, the temperature of the earth has gone up one degree Celsius and is climbing exponentially. Lowering meat consumption is crucial in our fight to resist climate change.

Avoiding meat not only counteracts climate change but also discourages the murder of animals. My parents raised me pescatarian for moral reasons, and as I grew up, I learned about the environmental benefits as well. Typical animal rights activists take the route of the moral argument for limiting meat consumption. Think of documentaries like “Food, Inc.,” “Earthlings” and “Maximum Tolerated Dose,” as well as PETA twitter campaigns that pull the audience’s heartstrings with montages of tortured animals.

What is often left out of the conversation about meat consumption is how climate change affects different populations disproportionately. With rising greenhouse gases, we must look outside solely planetary viewpoints and think about the collateral effects on society, such as environmental racism. In my hometown of Minneapolis, MN, some communities of color live in red zones, or areas of the city with higher levels of air pollution. Low-income communities and communities of color receive the most harmful casualties of air pollution. This includes lung damage and, in extreme cases, shortened lifespans.

In the U.S., we frown upon harming animals, but only certain animals. Cultural norms are the only constructs that give us the license to decide who should be cuddled and who should be eaten. Activists and mainstream western culture condemn the mass killing of dogs in the Yulin Dog Meat Festival, but many continue to eat cows, pigs and chickens. To reference ’90s punk rock band Decrepit’s album title, “If You Love Animals Called Pets… Why Do You Eat Animals Called Dinner?”

Once we recognize that we are not morally superior for eating a different type of animal, we must take steps to stop the injustice toward animals — as well as people and the planet — that results from factory farming. The first step to environmentally-conscious eating is dissolving the purist “all or nothing” mindset: the idea that we must be entirely committed to a cause, or else disregard it entirely. Often, when someone finds out I don’t consume animal products, they try to find something I do that could counteract a “vegan” lifestyle. A common one is, “But your shoes are leather.” Yes, but I’ve had them for years and will not buy more leather. That doesn’t invalidate other efforts I’m making to be environmentally conscious. Not everyone will drop everything to live an entirely plant-based lifestyle, but when it comes to halting climate change, small steps are always better than nothing.

I made the leap to cutting out all animal products and byproducts when I started school in LA. For me, it was easy to eliminate animal byproducts because I rarely ate dairy and never had to cut meat out of my diet. For others, the switch to planet-conscious eating can be more difficult. However, by changing our mindsets and pushing ourselves out of our respective comfort zones, we can hinder climate change and the murder of animals.

I often hear people making excuses to not be vegan. They say if being vegan wasn’t expensive, they would do it. However, being vegan is not any more expensive than a non-vegan diet. In fact, eating less meat can actually be less expensive if you know how to navigate it. On a large scale, there is a positive correlation between gross domestic product and meat consumption: the poorest countries eat the least amount of meat. Cutting out meat saves you money and is better for the economy. Budget is not a valid excuse to continue eating meat.

It’s ignorant to say everyone should be vegan without taking their circumstances into account. I have been privileged enough to access information that has allowed me to understand the importance of avoiding meat — such as the fact that farming is responsible for 574 million metric tons of carbon dioxide emissions per year in the US. However, every person at this institution of higher learning is educated enough not to claim ignorance about the harm that factory farming causes. The systematic oppression of animals and the planet is not directly our fault as individuals, but we have the power to resist by not buying meat and putting our money into the hands of the industry.

Ultimately, we must make small changes in our diet to promote animal and environmental well-being. I urge you to step outside of your comfort zone; if everyone stays comfortable in their past habits and doesn’t change, neither will our trend toward a dying planet. We act in ways that reflect our values. Let’s do the same with eating.

Julia Eubanks is an undeclared first year. She can be reached at jeubanks@oxy.edu.