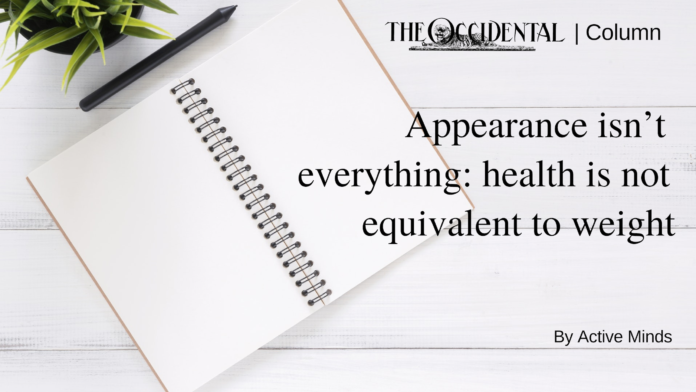 Society idolizes skinny. It judges fat. It does this to the point that it claims thin is always healthy and chubby is always unhealthy. The conventional wisdom in the media is that losing weight makes you healthier, and quick, unhealthy weight loss methods such as thinspo and diet fads proliferate across the Internet. To put it bluntly, this idea is wrong. Weight is not a foolproof indicator of health.

The most obvious reason that a lower weight is not always healthier is starvation. Not weighing enough kills. Anorexia is the eating disorder that involves restricting one’s food consumption and/or over-exercising with the goal of being skinnier. It is the third most common chronic physical or mental illness in teenagers, and college women are even more at risk. 25 percent of college men and 32.6 percent of college women develop some sort of eating disorder. This is a fatal problem, as anorexia has a higher mortality rate than any other mental illness.

Furthermore, fatness is not correlated with as many health problems as the media advertises. In an article for Nutrition Journal, Lucy Aphramor and Linda Bacon report that those who are considered overweight, and even moderately obese, do not live shorter lives than those who are thin or at an average weight. In fact, according to their article, “Most epidemiological studies find that people who are overweight or moderately obese live at least as long as normal weight people, and often longer.”

Many dieting and health agencies provide evidence that more weight is less healthy, but according to Aphramor and Bacon, the studies behind this evidence are unreliable. They do not take into account the social and economic differences between the group of obese people they are testing and the group of thin people they are testing. For similar reasons, the findings that show a correlation between obesity and certain diseases, such as type 2 diabetes, do not prove that obesity causes those diseases. More surprisingly, a study from Nature International Journal of Science provides evidence that obese people with type 2 diabetes, hypertension, cardiovascular disease and chronic kidney disease live longer than thin people with those same ailments.

In fact, consistently attempting to lose weight increases one’s likelihood of premature death through weight cycling. Weight cycling is when an individual loses a significant amount of weight, then gains it back, and the weight continues to fluctuate again and again. Dieting can cause this repeated trade-off of losing and gaining weight.

Although there is nothing wrong with attempting to keep a relatively consistent weight, it is easy to see that doctors labeling patients and others judging peers as unhealthy because of their weight is unfair and inaccurate. Now, you alone probably can’t change the medical system and stop it from spreading the message that weight is equivalent to health, but if your doctor tells you to lose weight, ask why. If the reason is an underlying health issue, work to live healthier, not to lose weight. Additionally, you should actively not judge others for their weight and contradict blanket statements about needing to lose weight. Health is not equal to weight and we need to stop acting like it is.

Authors for this piece are Adelia Nunn and the Active Minds E-board, a chapter of the organization at Occidental College. Active Minds is a national organization that aims to reduce the stigma surrounding illness and promote good mental health.