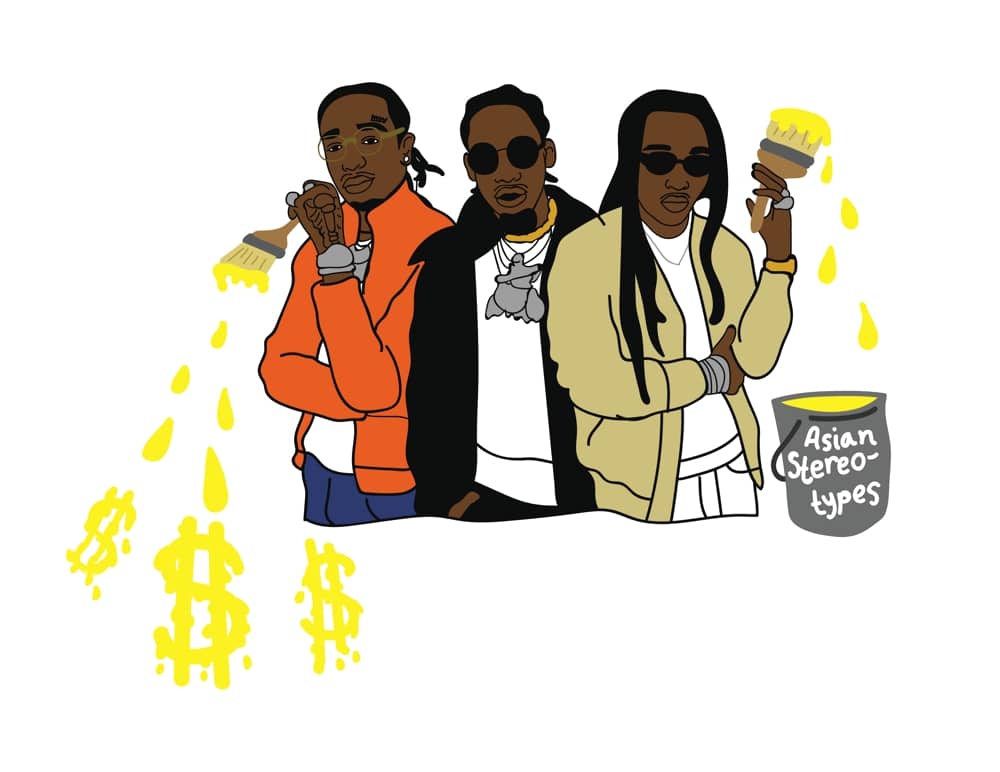 Atlanta-based trap group Migos now ties The Beatles’ record with 14 songs currently charting on Billboard’s Hot 100 list. With the group’s recent drop of “Culture II,” the anticipated sequel to 2017’s “Culture,” Migos have released or been featured on 60 songs in the past two months alone. Through inundating the music industry with catchy, contemporary rap, Migos have established a system of damage control, whereby the public’s anticipation of a new release obscures their wrongdoings. While Migos’ unmatched dominance on modern charts is no doubt impressive, their success has come at the expense of multiple lyrics containing anti-Asian racism.

Migos released “Stir Fry,” the second single from “Culture II,” Dec. 20. The track, which Pharrell Williams produced, features a vibrant, trap-pop sound that has aided its success on streaming charts. The song peaked at No. 12 on the Billboard Hot 100 chart and is averaging around 15 million Spotify streams per week. While this song continues Migos’ trajectory toward stardom, the racism in the lyrics led to the creation of a video that expanded upon this bigotry.

Going beyond the prejudice in the song’s lyrics, the “Stir Fry” music video depicts Asians as mystical, one-dimensional and subservient. Despite having a British-Chinese director, Sing J. Lee, the “Stir Fry” video reminds consumers that Migos have the final say in the creation of their own art. Regardless of their role as actors in the video, Migos are directly responsible for drawing on overused, outdated cinematic methods to craft a feeling of exoticism within their music video.

Some might think Migos are attempting an homage to martial arts movies in the way other musical artists have done. Unlike those artists, they fail to appreciate the distinctions in unique cultures and instead appropriate them. For example, while Kendrick Lamar references Asian culture in his “DNA” video, he does so in an artistic manner that expresses a specific appreciation for Hong Kong-style martial arts movies.

Unlike Kendrick Lamar, Migos’ use of many countries’ distinct cultures is offensive and devoid of appreciation. Adding to this ethnic insensitivity is Migos’ appropriation of multiple cultural stereotypes. Throughout the music video, Quavo, Offset and Takeoff play the Chinese puzzle game mahjong and wear formal Chinese gowns — yet they also practice a style of hand-to-hand combat originating in Japan. This pairing of Chinese and Japanese symbolism excludes individual nations and cultures, grouping them into an ambiguous “Asia” instead. In addition, the video portrays the most extreme stereotypes of these cultures: the stir-fry restaurant with ornate walls displaying paintings and scrolls; red, smoky, high-contrast lighting; and a thin, martial arts-based plot centered on revenge. These are all textbook examples of cultural appropriation.

In addition to using stereotypes in the scenery and plot, Migos reduces the Asian characters to stereotypically submissive roles. Throughout the video, Migos are portrayed as inebriated high-stakes gamblers, yet the Asians around them are pictured as submissive bodyguards, stir-fry cooks and hostesses. To make things worse, Migos deny the voices of almost all Asian side characters in the video, even going so far as to cut out the tongue of a woman. In this, Migos are figuratively and literally profiting at the expense of Asians.

Though this racism may seem like a singular episode, fans of Migos must remember their lingering trail of bigotry that has touched other songs, such as “Get Right Witcha,” “Chinatown” and “Jackie Chan.”

Back in 2013, Migos released “Jackie Chan.” On this track, Takeoff said, “I’m smoking on Jackie, my eyes is ch—y,” equating the side-effects of marijuana consumption with stereotypes surrounding Asian eyelids. Three years later, on the 2016 “Culture” track, “Get Right Witcha,” Quavo rapped, “Goin’ to Chi-land with them ch—s.” Like in “Jackie Chan,” this slur was tacked on for no justifiable reason. This problem of racism in Migos’ lyrics and videography cannot be attributed to a sole member, but to the entire group, who face no scorn from media outlets.

Since Migos is such a well-known group, it’s shocking that neither their fanbase nor the media have criticized them for using this racist language. The few who have criticized them have done so in smaller forums and ranting social media posts. In a way, Migos’ listeners have defended these lyrics by failing to exercise consumer selectivity. With contemporary media’s fixation on calling out even the slightest bit of celebrity prejudice, it seems perplexing that Migos have been let off the hook multiple times with such a spotty history.

Although few have called attention to the racism in Migos’ music, the media has repeatedly slammed them for homophobic comments they’ve made in the past. Last year, after personally attacking the credibility of openly-gay rapper, iLoveMakonnen, Migos were rightfully forced into apologizing for their hostile statements, stating, “We love all people, gay or straight.”

While Migos bear the blame for their pattern of racism, media bias and oblivious fans have allowed this discrimination to continue for far too long. The media has previously demonstrated its ability to force an apology from Migos for their homophobia. They have a moral obligation to demand another apology from Migos for the racism in their lyrics.

Oliver Spirgi is an undeclared first year. He can be reached at ospirgi@oxy.edu.