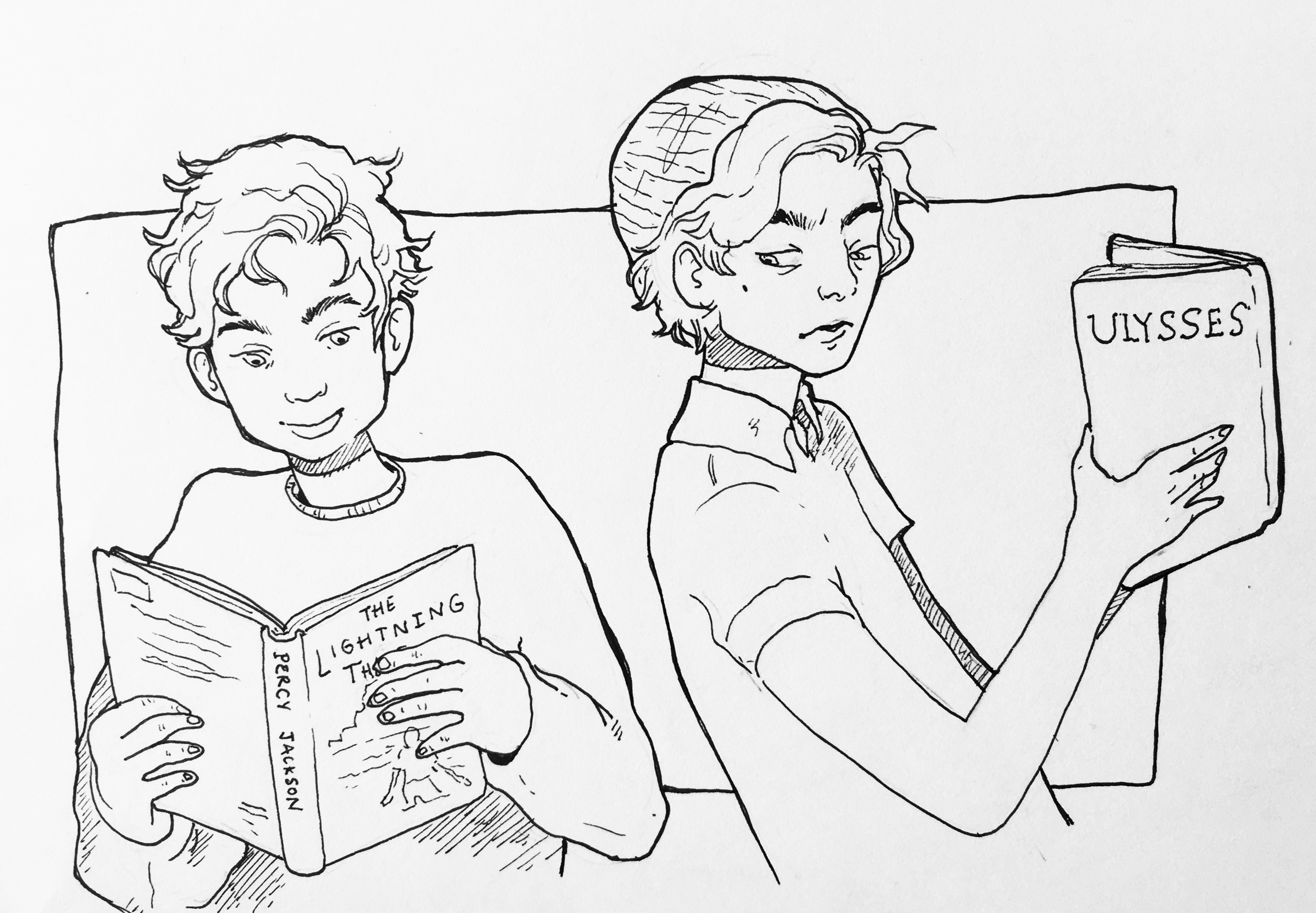 My hands-down favorite book is “Percy Jackson and the Lightning Thief.” Judging me?

“That isn’t a real book,” my friend told me recently. “It doesn’t count.”

“When are you going to start reading about grown-ups?” my brother asked me the other day, as though cracking open the stiff spine of my mother’s copy of “The Da Vinci Code” would be the sure-fire sign of my burgeoning maturity.

As a Diplomacy and World Affairs major, I often find myself huddled beneath the fluorescent lights of Johnson Hall, bogged down by dry articles about current events and theoretical approaches to foreign policy. I need a break from the daily monotony of academic discourse. Young Adult (YA) fiction lets me take a break from the mundane with the fantastical. “The Chronicles of Narnia” allows me to step away from the development policies of the International Monetary Fund for a hot second, and instead embrace immortal lions and magical horns. It gets me out of my head.

But YA fiction is not just pure escapism. I also identified with it as a teenager, meaning that re-reading it now is a bittersweet déjà vu. I raced through “The Fault in Our Stars” because I am awkward and shy and wanted to know how it felt to fall in love. I pored over “The Perks of Being a Wallflower” because I identified with the narrator’s introverted façade. When I reread these books, I am reminded of myself at 16: flawed, self-centered, kind-hearted.

Slate contributor Ruth Graham characterizes YA as lacking in both substance and sophistication. She criticizes authors for indulging a genre that is “a dip in the kiddy pool” — refreshing, but ultimately unsatisfying. Great literature, Graham argues, should embody the “moral ambiguity” of adulthood because anything less than that is an affront to the “serious reader.” But teenagehood is when children develop personalities and form their own ethical codes. Adolescence is full of moral ambiguity.

In the Harry Potter series, J.K. Rowling creates a world full of moral ambiguity — Snape and Malfoy occupy a liminal space between good and evil, stretching our sympathies. Rowling also uses her fantastical world to explore racial tensions — “mudbloods” are discriminated against, and in the later books summoned to register with the Ministry of Magic because they are not “pure-blood” wizards.

Suzanne Collin’s “The Hunger Games” is a harrowing social commentary on the sort of looming dystopian world; Panem could be a not-so-distant future. The trilogy also has a serious feminist element. Not only is Collins subverting fantasy genre norms by having a female protagonist — unlike “Lord of The Rings” or “Harry Potter” — Katniss is physically and emotionally stronger than her love interest, acting as his “knight in shining armor” time and time again. Graham’s “moral ambiguity” is also present in the text. In “Mockingjay,” Katniss fights with Gale over his creation of weapons.

There is a bizarre elitism about what adults, liberal arts students, intellectuals, should be reading — about what is considered “genuine literature.” Sure, F. Scott Fitzgerald’s use of figurative language is more original and nuanced than Stephenie Meyer’s description of Edward Cullen’s “ocher eyes.” But we read to connect with a story — to see ourselves within a narrative — and what society deems “valuable” in a story shouldn’t matter to anyone but the one who is seeking meaning. YA fiction shouldn’t be dismissed as unimportant. You cannot determine the value of my encounters with the characters that exist within the confines of ink and paper.

Sana Vasi is a senior Diplomacy and World Affairs major. She can be reached at vasi@oxy.edu.