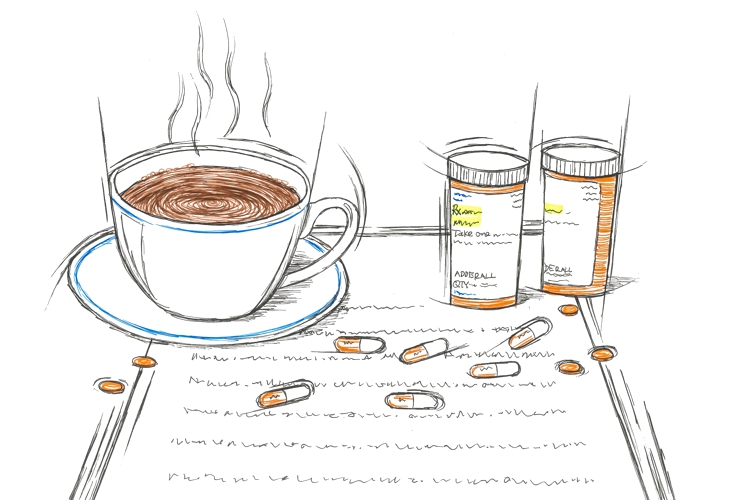 At age 18, I tested for ADHD and passed with flying colors, scoring four times higher than the minimum I needed for a diagnosis — not that I’m bragging. That score doesn’t mean I studied for the test, it means it takes me three hours to get dressed, shower and feed myself in the morning without chemical help. But hey, at least I get Adderall out of it.

Well, that’s how it’s framed for me: “at least” — like it’s a silver lining. Because Adderall is a party drug that you can use to study, right? It’s a college student’s best friend, right? I’m “lucky” to have a prescription. Right?

Well no, I’m not lucky — I have a mental disorder. And I take a prescribed medication to treat it. When people use psychiatric drugs recreationally, they embolden the lie that drugs like Adderall are luxury items, not legitimate medical treatment options. It dismisses the severity of the conditions those drugs are designed to treat.

Now, to be clear, I’m not saying everybody who takes mental health drugs without a prescription is terrible or anything. Addiction and social pressure to abuse drugs are very real, and both of those are more problems of access or brain chemistry than ill intent. That isn’t my issue. I’m talking about people who aren’t addicted to these drugs and still pop pills to pregame on Saturday night when there are plenty of other ways to get high. That grinds my gears.

A lot of people believe the myth that ADHD straight up doesn’t exist or is so common that it shouldn’t be taken seriously as an illness. That stems primarily from the debate on the over-prescription of ADHD medications like Adderall and Ritalin. These drugs are widely prescribed, so much so that respected medical professionals have publicly said that they don’t think ADHD is an actual medical condition. Others acknowledge its existence but believe pharmaceutical companies have over-exaggerated its prevalence to sell drugs.

I don’t know which side is right — I know that medication is effective for me, but over-prescription happens and should be addressed. Even so, that debate, necessary as it might be, discourages people from seeking treatment. And when people take ADHD drugs recreationally, it unnecessarily compounds the stigma created by psychiatrists who are over-prescribing.

On a personal level, widespread recreational Adderall use prevented me from seeking treatment for my own ADHD. Until I was diagnosed in 12th grade, I was a disappointment. Every adult in my life — parents, coaches, scoutmasters, teachers — told me I wasn’t meeting my potential. I don’t blame them; that’s what they saw. I was late everywhere I went, could barely sit down to do my homework and I very rarely saw things through. Every report card I got with written comments would say something like: “Greg clearly understands the material, but he doesn’t put in the work.”

So, naturally, I needed to work harder. That thought led me to develop severe anxiety and depression, both of which are particularly common for ADHD sufferers. Even when I tried to work harder, I’d get that same report card; I’d hear the same thing around the house. Eventually, I just assumed I was the problem. I started to feel defective, like I should just throw myself in the trash. To be honest, I still do.

Even then, I refused to be tested for ADHD. I had high school friends who took Adderall without a prescription — to finish papers, to get high. One close friend even said to my face that ADHD was a disorder made up in order to get drugs. The only reason I finally got tested was that my mom kept nagging me about it. And even after finally getting tested, as a legal adult, I wouldn’t entertain the idea of medication. I did fine with sheer force of will, 48 ounces of coffee a day and extra time on exams.

But last summer, I cracked; my ADHD got so bad I couldn’t focus long enough to follow through on job applications or do much of anything else without gallons of coffee. And even that wasn’t sure to work. That led to a particularly vicious spiral of depression, which of course made it even harder to focus. Trust me, suicidal thoughts are an absolute nightmare for productivity.

So I sucked it up and went to a psychiatrist. She gave me Adderall. I don’t take it to get high, I take it so I can be five minutes late instead of 45. And though it’s not a silver bullet — my editors who got this article a week late will attest to that — it still works pretty well.

After this drawn-out personal history, it’s profoundly frustrating to see people taking a drug recreationally that I use to combat a lifelong disability. I know it does not comes from malicious intent, but it’s still hurtful. It makes it seem like it’s supposed to be fun to have a mental disorder. I know recreational drug users aren’t solely to blame for the stigma surrounding ADHD and every mental health issue beyond it. But even if they didn’t cause the problem, they do make it worse. And it would be great if they stopped.

Greg Feiner is a junior theater major. He can be reached at feiner@oxy.edu.

Opinion: How to love the mountains as fires rage

Opinion: Haitian history is our history

Opinion: Jewish students should not have to choose between school and religion