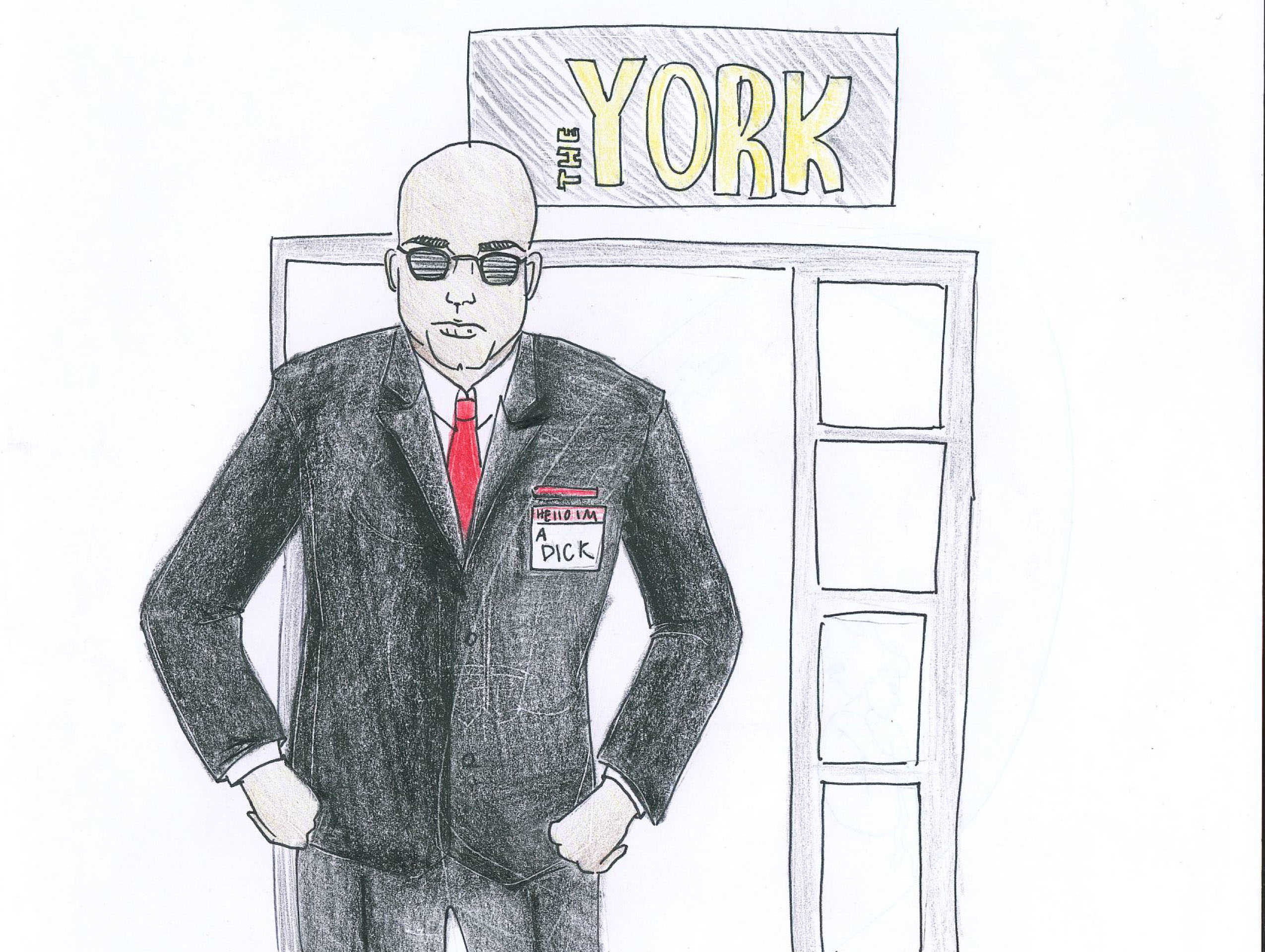 Several weeks ago, I made my way to York Boulevard for a night of Thursday bar-hopping. As usual, the Occidental crowd started at Block Party, and when the patio closed at midnight, most students transitioned to the York. I was among this crowd and followed behind a group of acquaintances with several of my friends. At the entrance of the York stood a muscular man towering over me.

He looked at me more closely, and halfheartedly apologized for his mistake. I was used to such misgendering, and the understanding that this man saw me as different, deviant, queer sat uneasily in the back of my mind. He took my ID as I handed it to him, guiding a small, blue flashlight over its content. He looked at me again, eyes narrowed.

I told him my height.

“What is your zipcode?”

I relayed my zipcode. The next thing I knew, he slightly widened his stance, and folded his arms with my ID tightly in his grip.

“Is there a problem?” I asked. He shook his head condescendingly and proceeded to tell me to go to another bar.

He refused, but I persisted. A few Occidental students noticed there was a problem and made their way outside, including a classmate from my home state. She was let into the bar just two minutes earlier with the same vertical ID, showing a 1995 birthdate in the top right corner.

“Sir, what is the problem?” she urged. “You let me in with this ID just a minute ago.” He turned to her and replied:

“Maybe if you two had gone in at the same time it would have been a different story. I have the right to refuse service to anyone.”

I am fully aware of the visibility of my queerness. My hair is short, my clothes androgynous. I do not mean to say that every woman who styles herself in this way is queer, but I understand that most people assume my queer identity simply by looking at me, and experience some level of anxiety regarding my gender ambiguity.

Bouncer culture reveals fragile masculinity at its finest, as confirmed by my experience at the York. Men are employed to exert power over others, many times purposefully excluding those they sense do not belong. While these men of a certain stature and disposition are often hired to ensure the safety of customers, it is not their job to be unnecessarily aggressive and abuse their positions in order to feel powerful. As I continued to confront this particular bouncer, it was clear that our argument shifted from his questioning of my age, to a refusal to surrender such power. I could feel his frustration and his hatred of me. He could not stand the idea of a queer woman questioning his authority. I did not fit his idea of who is welcome in the space he helps to control. Finally, I decided to walk away, shaking with rage and humiliation. I was not upset that I didn’t get into a bar, or that someone believed my real ID to be fake. I was furious at my experience of harassment and discrimination.

These incidents of hyper-masculinity and exclusion do not just occur at non-Oxy locations; they exist in our own community. Last fall, I attended a party at an off-campus house where men were charged $10 while women were let in for free. I was troubled by these conditions as they were a strategic way to have more women in attendance. I was also unsettled by their lack of consideration for those who do not identify within the gender binary. When I arrived at the door, I attempted to walk through the gate. A male student forcibly grabbed me by the shoulders and held me back.

“Where do you think you’re going, dude?” he asked. Once again, I was examined more closely and given an apology. Apparently, this act of violence would have been permissible if I was a man. Such is the danger of the heteronormative culture of some Occidental parties.

The door — to bars, clubs, parties — is, at times, a terrifying threshold to cross for queer people. In spaces that aim to uphold the conventional, those who are singled out by their queerness often feel unwelcome or are altogether excluded. Bouncers, whether at the York or at an Occidental party, actively maintain whatever environment these spaces choose to preserve; they decide who is welcome and who is not. If trouble with bouncers exists for people like me, we need to think about the implications of such exclusion. Who makes up the guest lists at Greek events and ATO parties, and who is creating such lists? It is no secret that the guest list of Paddy Murphy, an SAE-run event, is primarily made up of conventionally attractive, cisgender, female students selected by men. Queer students are often times invisible at these events, or feel out of place among the overwhelmingly heteronormative crowd.

Looking forward, I believe we must thoughtfully consider the places to which we give our business outside of Occidental — their policies and those they hire to uphold such policies. Most importantly, we must reflect on our own party culture, our guest lists and our bouncers, in order to ensure the inclusive community for which we strive.

Katherine Torrey is a senior history major. She can be reached at torrey@oxy.edu.

Opinion: How to love the mountains as fires rage

Opinion: Haitian history is our history

Opinion: Jewish students should not have to choose between school and religion