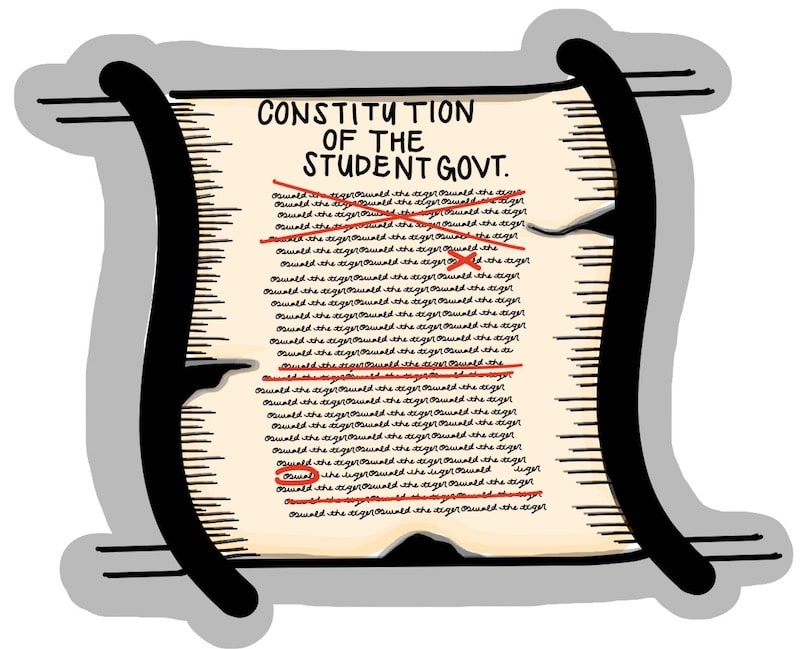 “The constitution currently is a bit of a disaster, so at least for now, a lot of work is going to have to be done,” Associated Students of Occidental College (ASOC) Chief of Staff Jennifer Park (first year) said in an email to the ASOC Constitution Commission March 5.

The Commission has been revising, clarifying and considering changing aspects of the constitution to address significant structural issues and recent concerns over the constitution’s bylaws and appeals process. Members of the Diversity and Equity Board (DEB) raised concerns March 26 regarding a misallocation of funds earlier in the semester, which led to a larger discussion between DEB and ASOC Senate regarding whether ASOC should implement policies for funding interactions between branches, according to Park.

“There’s no process right now at all, which can lead to decisions that are inequitable, which is what happened this semester,” DEB Secretary Eushrah Hossain (senior) said. “It’d be a process that includes Honor Board because none of the branches besides Honor Board should be making punitive decisions.”

Herdman said some ASOC members found issues with how ASOC resolved the misallocation of funds because Senate unilaterally passed a ruling on it and set a precedent for how the problem would be solved in the future.

“They didn’t check with the other branches first, and so other students kind of spoke up and said there shouldn’t be a rule that applies to all branches if only one branch voted on it,” Herdman said. “We want to have a process for how that should be handled that all branches can agree on, not just Senate. ”

According to Herdman, although each branch of ASOC performs a different role, communication and consensus between branches is vital.

Although we have different specific tasks, ultimately what we’re doing is representing and or promoting the initiatives of the student body, and it’s important that all of us are communicative and work together to do our job as best we can,” Herdman said. “Any branch working on its own isn’t as effective as all of us working together.”

According to Park, the miscommunication between branches is not the only aspect of the constitution that needs to be addressed.

These contradicting bylaws came from the fact that Senate and other branches make small policy changes in order to function efficiently, according to Park.

“The constitution is outdated and these changes have been made to the bylaws. If they weren’t made, these bodies wouldn’t be functioning,” Park said.

Along with improving financial policies between branches, the commission will seek to address the lack of an appeal process for sitting ASOC officers who become unable to serve due to ineligibility while holding their position, according to Park. Currently, if an officer is put on academic probation or becomes ineligible, they are encouraged to resign voluntarily, Park said.

The previous appeals process was listed under a section in the constitution about running for office, according to Herdman. Park said that this inhibits senators on probation from having access to an appeals process.

According to Herdman, the section of the constitution regarding ineligibility led to the commission’s evaluation of it.

“There was no point in just going in and adding that one part, instead it’s better to really take a good look at it and update the whole thing,” Herdman said.

In order to ensure all of ASOC is aware of potential policy changes, each branch of ASOC has a voice in the adaptation of the constitution, according to Park.

“The process of bringing a constitutional change to the ballot is simply a vote of Senate,” Park said. “However, the constitution governs all branches of ASOC. The goal of the commission is to ensure that all of the branches are on the same page regarding possible changes. The last thing that we want to do is blindside someone with a potential change.”

The commission is still currently evaluating the constitution and considering making changes, according to ASOC President Zach Solomon (junior).

“I wouldn’t expect it to be on the ballot anytime before the winter elections next year, although things could change,” Solomon said.

According to Solomon, however, there are positive aspects to slowly reevaluating the constitution.

“If there’s a ton of feedback and there’s a lot of lively discussion on what is the role of X or how do we govern Y, I think then it’s something you’d want to push back,” Solomon said. “It’s going to be a process, and the process, after all, is the most important part of it.”

According to Hossain, the constitutional changes that have been proposed are necessary and will benefit the student body.

“I think they’re super necessary and it’s kind of surprising that some of the things that are going to be added aren’t there already, like an appeals process and misuse of funds, because previously there has been misuse of funds and they’ve just dealt with it however,” Hossain said. “I think it’s really awesome that all of the branches are working to getting and involving each other in every decision.”