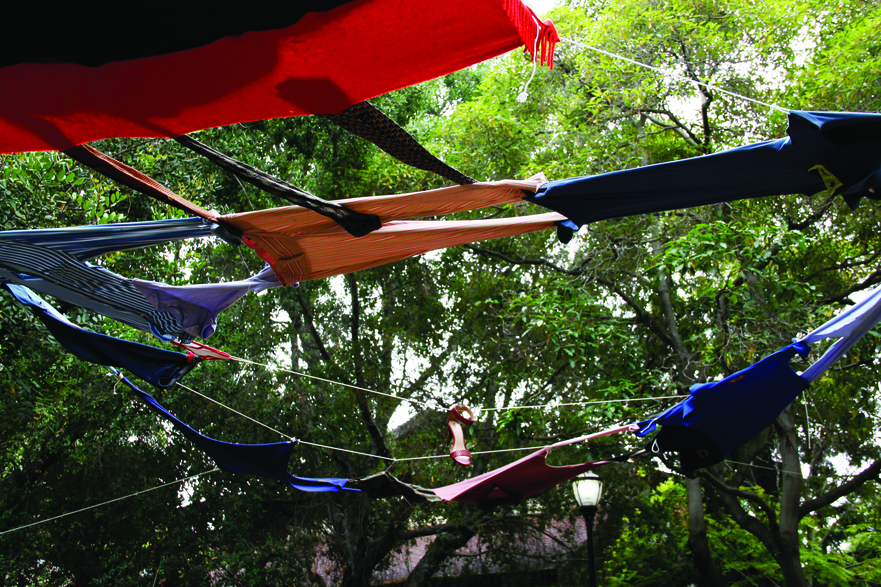 The sculpture, titled “Tension,” serves as a critique of societal transphobia and draws attention to the oppression of trans individuals. It is comprised of a collection of male clothing items, tied together and strung between several trees to form the Venus symbol. One of the pieces of clothing was cut down and stolen. The installation includes a chalkboard, listing instructions from “Mom” on how to be a woman. On Sunday, Barringer found that some words like “dresses,” and the instruction, “wear dresses and skirts,” were erased from the list.

When Barringer saw the vandalism, she was caught off guard.

“When I went up to it at first and saw that it was hanging down, I wasn’t thinking, ‘Oh somebody’s messed with it.’ I thought, ‘Oh the wind blew it down and I need to put it back up,'” Barringer said.

When Barringer saw the piece had clearly been cut and that part of it was stolen, she realized the damage had been done intentionally. She said she was not expecting this at Occidental, a school she views as generally tolerant of all gender identities.

“I was surprised and disappointed that this happened,” Barringer said.

In response to the vandalism, Barringer decided to repair the sculpture, instead of taking it down. The Office of Student Life (OSL) approved her request to keep the installation up longer than initially planned.

“I think that in the face of hatred the best thing you can do is show resilience,” Barringer said.

Barringer was heartened by the support and encouragement she received from other students after the incident, including the Queer Student Alliance’s letter to the editor condemning the vandalism.

“It’s incredibly important that we take direct action to ensure that this doesn’t happen again,” Leazier said via email.

News sites such as The New York Times and CNN have been discussing transgender rights in the context of how the Department of Education removed federal protections allowing transgender students in public schools to use the bathrooms corresponding to their gender identities. Jones said the Title IX office looks for policy changes concerning transgender rights and works to ensure Occidental remains a welcoming place for all.

“We need to be increasingly vigilant about getting people to think about it and make a commitment to having an inclusive community,” Jones said.

Jones said the Title IX office plans to increase the education they provide on transgender rights to supplement the summer training that staff and faculty already receive. The office is also trying to educate students that issues of gender identity and expression are part of Title IX’s policy.

For Jones, this vandalism can be viewed as a wake-up call.

“When something like this happens, it is a reminder of how far we still have to go to get everyone to understand that we need to respect other’s right and their property and that this is the cornerstone of what it means to be an inclusive community,” Jones said.

Jones said that this can also be a time for those at Occidental to collectively improve the campus climate.

“For me, this is a very unfortunate incident and it’s very disappointing but I would hope that it comes with reflection for all of us,” Jones said.