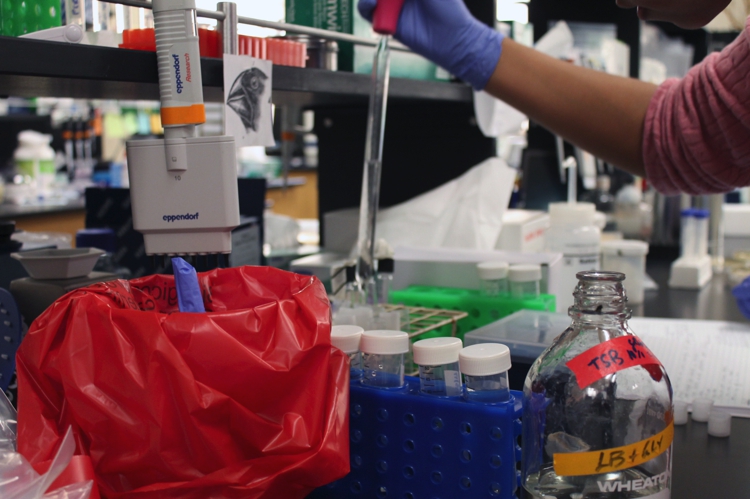 Four Occidental students conducting research in the sciences received the prestigious Science Scholars award Feb. 1. Faculty from the physics, chemistry and biochemistry departments selected juniors Molly Brown, chemistry, Jose Campuzano, biochemistry, Holly Barrett, biochemistry and Nan Ma, physics, as recipients of the $15,000 scholarships, which will help fund their research for the next year and a half.

“I was not sure [I had received the award] before the announcement came in,” Ma, a physics major, said. “So of course I was so excited to see that what I had done eventually paid off. That my work is recognized and appreciated.”

Ma is an international student from Nanjing, China, who is currently working with Physics Professor Dan Snowden-Ifft on measuring the neutron flux of dark matter across a detector that Snowden-Ifft built. She initially began conducting research through Occidental’s summer program, the Undergraduate Research Center (URC) . The URC works with the Kenneth T. and Eileen L. Norris Foundation and the Fletcher Jones Foundation to provide outstanding student researchers with the funding necessary to focus on their studies and financially support themselves.

“It is a long-term commitment — three semesters and a summer,” Janet Morris, a URC administrator, said. “But because of that level of focus and commitment, students are able to get results that might lead to their work being published or to help them get into graduate school.”

Campuzano applied to the Science Scholars program without full comprehension of what the award entailed, and said he was shocked to find out how generous the scholarship is. Campuzano is currently working with Assistant Biology Professor Karen Molinder on developing a framework for a vaccine against a bacterial infection that affects horses as well as other farm animals. Though Campuzano claimed that he initially entered college thinking he would become a doctor, he now hopes to work within higher education as a professor.

Barrett works with Campuzano in the same research lab, but she will be overseen by biochemistry Professor Roberta Pollock. Barrett believes that the research she is conducting at Occidental will one day help her in a future veterinary career.

“The ultimate goal of our research project is to help horses,” Barrett said. “This has given me a glimpse into the research side of veterinary medicine, [as well as] the challenge of working ethically with animals in research.”

“It is not an exaggeration to say that my undergraduate colleagues do all of the experimental work,” Cannon said. “When I have students like Molly, the progress my research makes is much faster than if I were to be working alone.”

Likewise, Snowden-Ifft feels his research lab is greatly improved by the presence of undergraduate researchers.

“It takes a real commitment to research to be able to see that through,” Snowden-Ifft said. “Science scholars are the best of the best.”