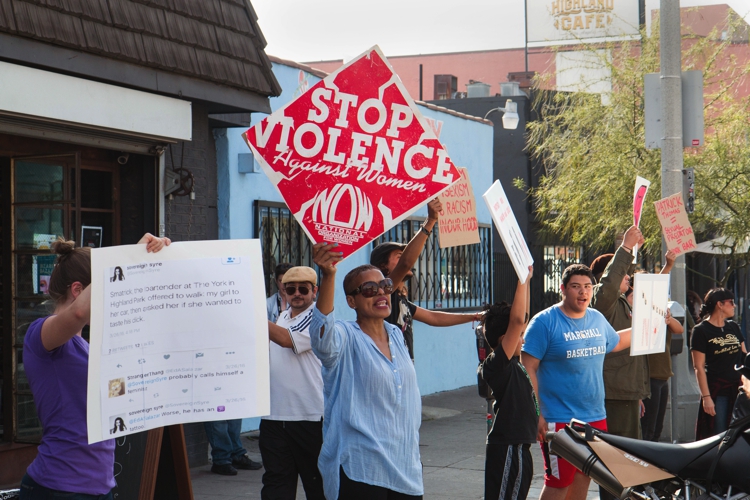 In response to a civil lawsuit alleging workplace sexual harassment and assault, 19 people marched outside of The York gastropub this past Saturday. The reports, alleged by former bartender Brenda Perez, are part of her ongoing civil lawsuit against the company that owns the bar, The York Project LLC (case details can be found online here using case number BC604740). Perez filed the lawsuit December 2015 after working at The York for nine years; the current trial date is set for May 2. Perez’ complaints of harassment and assault are directed specifically at Patrick Thomas, also know as Patrick Duniven, a bartender and current assistant general manager. Thomas declined to comment on the allegations.

Participants began to march in front of The York’s front entrance and occasionally stopped marching to hold up their signs when car traffic slowed at 4 p.m. Saturday. The number of participants grew from 12 to 19 during the two-hour protest — community members from organizations such as the Northeast LA Alliance (NELA), the Brown Berets and Occidental Students United Against Gentrification (OSUAG) joined Perez to chant and picket on the York Boulevard sidewalk.

Ryan Ballinger, the current owner of The York, sat at a counter facing the street during the protest. He opened the windows to display a box of complimentary bottled water available for anyone. Ballinger explained his legal counsel restricted him from official comment, but that he was happy to offer free water because it was a hot afternoon.

Ballinger left the bar twice to interact with pedestrians who were speaking with protesters on the sidewalk — he handed out fliers with a statement that denies Perez’ allegations, invited people into the bar and described the bar as an inclusive, equal-opportunity workplace that respects all employees and customers.

Sara Mooney ’13 assisted Perez with organizing the protest. She originally discovered Perez’s lawsuit from an LA1 news article published Feb. 22 and reached out to Perez to share her own grievances with The York from her time at Occidental. Mooney created the Facebook event, made posters and reached out to Occidental professors and staff about the lawsuit via email.

“I think it is important to make this public and support [Brenda] in her isolation,” Mooney said. “There are so many people here who agree that the violence and hate that is housed in the bar is not acceptable.”

According to Jan Tucker, Perez’s public spokesperson and private investigator, he and Perez began organizing the protest at a meeting with representatives from the San Fernando Valley/Northeast LA Chapter of the National Organization for Women and the California League of Latinos and Chicanos Feb. 26.

Tucker hopes public events will encourage other women who have witnessed or experienced sexual misconduct by Thomas to consider making a formal statement describing their experience. Ultimately, Tucker aims to put pressure on city attorney Mike Feuer to sue The York on behalf of the people of California for allegedly violating the Unruh Civil Rights Act, which forbids discrimination on the basis of sex, race, color, religion, ancestry, national origin, disability, medical condition, genetic information, marital status, sexual orientation, citizenship, primary language or immigration status. Tucker referred to political organizer Saul Alinsky, who was a major influence on Cesar Chavez and Dolores Huerta, in describing his expectations for the future.

Perez alleged that she began experiencing a hostile work environment as early as 2008 but remained at The York because of Gabriel Byer, the former co-owner who co-founded The York with Ballinger. Byer died in a motorcycle crash in 2008, 10 months after The York opened. Byer inspired Perez with his vision for the bar as an accepting, community space.

“[Byer] embraced our culture, our community,” Perez said. “When he hired me, he said ‘I need people to understand that they are welcome here, to see that you are from this community.’ With him died that vision.”

Some pedestrians believed the protest was mainly criticizing The York for gentrifying Highland Park, but the organizers intended to condemn The York for allegedly condoning sexual harassment and discrimination.

Chris Carranza, a local student at Franklin High School who was born and raised in Highland Park, learned about the protest from a flier on Instagram. He had only heard complaints about The York in the context of gentrification, not for permitting sexual harassment. He watched the protest from a distance, observing but not participating.

“I don’t know that much about [the protest],” Carranza said. “A lot of people complain that they used to be able to come to the shops here and now they can not even afford it … but I have not seen any actual accounts of people saying they experienced this [sexual harassment].”

Protesters finished marching at 6 p.m. and gathered to discuss what they learned.

“I’m fighting this to the end, I promise you that,” Perez said. “I’ve already lost everything, so I have nothing more to lose — except my place — it’s okay, I think I can couch-surf next month.”