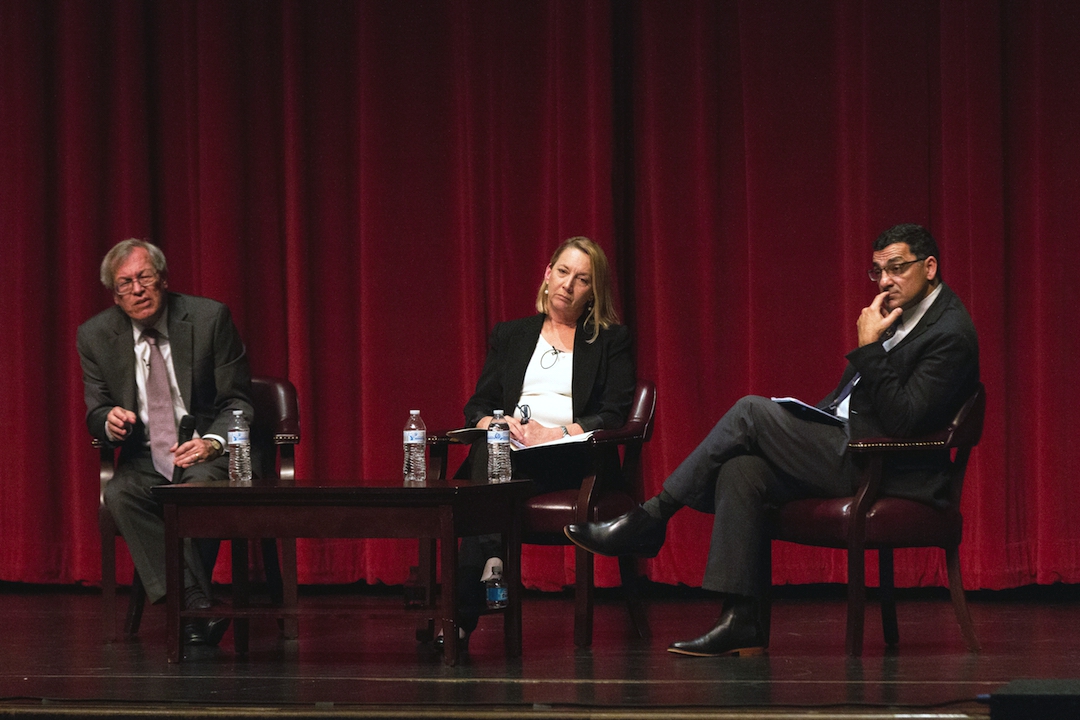 Around 100 community members, Occidental faculty, administrators and students gathered at 7 p.m. Feb. 6 in Thorne Hall to listen to and participate in “Freedom of Speech on College Campuses and Beyond,” a panel discussion about the present-day applications of the First Amendment. According to moderator Professor Warren Montag, the event explored the source of threats to freedom of expression and who is or is not effectively silenced in the contemporary United States. Panelists Salam Al-Marayati, Erwin Chemerinsky and Amy Pyle discussed the First Amendment’s intersection with Islam, college campuses and journalism.

In his introduction, Montag explained that the issues of freedom of speech are relevant to the present day given the current federal government’s unrelenting attacks on the media, the entry of Islamophobia into mainstream society and the recent cancellation of nationalist speaker Milo Yiannopoulos‘s lecture at University of California, Berkeley due to riots. The introduction was followed by a conversation between the panelists and a question and answer session with the audience.

As moderator, Montag hoped that the panel would address two important issues: the efficacy of a legal approach to free speech and the suppression of speech. Suppression of self-expression can also be cultivated by a political climate, rather than the law, according to Montag.

“There is no law banning the wearing of the hijab, for example,” Montag said. “But many Muslim women have stopped expressing themselves in this way because they are subject to extra-legal but very effective daily forms of intimidation, harassment and violence.”

The first panelist, Al-Marayati, founder and president of the Muslim Public Affairs Council, focused on Islam’s intersection with issues of freedom of speech in today’s political climate. Regarding college campuses, Al-Marayati discussed the issues faced by American professors studying topics related to Islam.

“Many professors who want to study U.S. policy in the Muslim world that runs contrary to the political establishment run the risk of being blacklisted by right-wing media,” Al-Marayati said via email. “I know many who are listed on Campus Watch, which was produced by Daniel Pipes and David Horowitz, and they target professors who take a more critical approach on the Middle East. Professors run the risk of losing grants or even their jobs if they are not tenured.”

Al-Marayati spoke primarily on freedom of speech in the context of the political milieu surrounding Islam in America. He asserted that despite the actions of the current executive branch of government, support for Muslims is at its highest ever since the issue is now open for discussion.

“I believe that America is still the best place for Muslims to live,” Al-Marayati said.

Chemerinsky, dean of the University of California, Irvine Law School and First Amendment scholar, spoke second. He focused his discussion primarily on the role college administrators play in monitoring freedom of speech on college campuses. Chemerinsky argued that colleges should find a way to strike a balance between protecting First Amendment rights and creating safe learning environments for all students.

“All ideas and viewpoints can be expressed on college campuses no matter how offensive,” Chemerinsky said.

The final panelist, Pyle — editor-in-chief of the investigative journalism publication, Reveal — discussed the media’s position in today’s political atmosphere. Nonprofit investigative news organization, Reveal, holds the powerful accountable by revealing government fraud, human rights violations, environmental degradation and threats to public safety. Older stories on the site, which has a “How to Leak to Us” page, have spurred criminal investigations, new laws and community actions.

“There have been two decades of implosion in media and the real decline in trust of journalism moved up in warp speed throughout this campaign,” Pyle said.

Due to this decline in trust, Pyle strives to ensure her organization continues to uphold the values of truth and accountability.

“Certainly in a broader sense, it does seem that students should be encouraged to speak their minds and that professors should not punish them for doing so,” Pyle said.

Montag affirmed Al-Marayati’s sentiment that free speech on campuses is not clear-cut given the current political climate. Specifically, Montag acknowledged that hallmarks of the college experience — open debate and discussion — cannot be realized without acknowledging sensitivity and inherent bias.

“When real dialogue is possible, we should pursue it,” Montag said. “But we have to recognize that a dialogue on issues that promise devastation for one of the parties but not the other is an impossibility.”