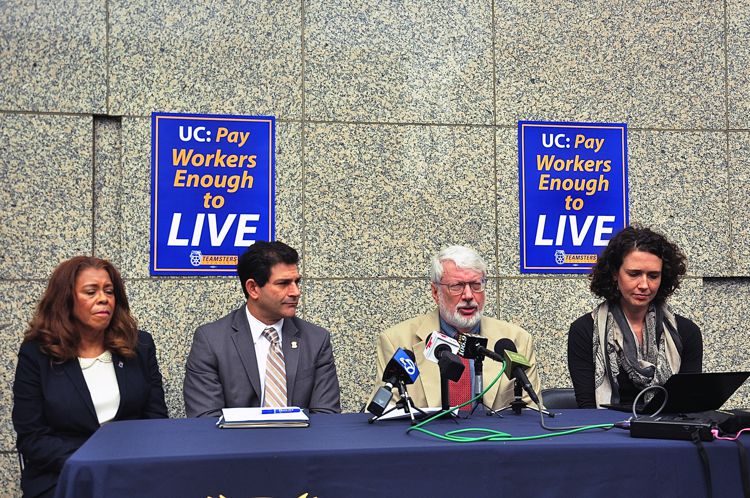 Occidental College’s Urban and Environmental Policy Institute (UEPI) published a report Oct. 17 that found that 70 percent of the University of California‘s (UC) administrative, clerical and service employees could not provide adequate food for their households. The study, which was conducted by current UEPI staff members Megan Bomba, Rosa Romero and Professor Peter Dreier, discovered that nearly 80 percent of those surveyed have sacrificed utilities or rent payments in order to purchase a sufficient amount of food.

The report was inspired by a similar study conducted earlier this year by the UC Global Food Initiative, which reported that 42 percent of UC students had either a low-quality diet or an involuntarily reduced food intake. These two concepts constitute food insecurity, which is a product of both high costs of living and disproportionately low wages, Dreier said. Over time, according to the UC study, it can lead to constant hunger, malnutrition, developmental problems for children and serious health consequences.

The UC students study was conducted by the Bureau of California, and used a six-question survey designed by the U.S. Dept. of Agriculture. After the Teamsters Union read the study, union leaders approached Occidental’s UEPI to investigate the food insecurity of their own workers. This study used the same six-question survey with an additional open-ended response question so that the results from both could be compared. The Teamsters had access to union membership, and thus were able to collect responses from 3,000 employees for two weeks in September; afterward, UEPI staff analyzed and organized the data.

The rate of food insecurity among employees — 70 percent — is one and a half times more than that of UC students and five times that of most California residents.

“It brings me to tears answering these questions and realizing how often my husband and I go without so that our children have enough food to eat each month,” one anonymous survey respondent wrote in the open-ended response field. “I work very hard every day and go above and beyond my job description, yet I don’t earn enough to live!”

Even though Dreier had read the UC student survey, he was still surprised that the struggle to eat was commonplace for workers as well.

He attributed the food crisis to the inadequacy of the minimum wage. The average pay for those surveyed is $20 an hour — much higher than the UC’s prospective minimum wage of $15 an hour, which will come into full effect for all campuses by 2017. Nevertheless, Dreier emphasized that the UC system, the third largest employer in the state, should be responsible for driving economic growth and prosperity so as to better provide its employees with a living wage.

“The UC schools should not become the Walmart of higher education,” Dreier said.

He suggested that the problem could be addressed with rent control measures and housing subsidies, but said that people will still need a living wage to survive. A 2013 California Budget Project study found that two parents with two children need $61,000 annually just to make ends meet. That translates to nearly $30 an hour, which is double UC’s minimum wage.

UC Spokeswoman Dianne Klein said the university system is currently in discussion with the Teamsters Union and that raising wages would need to be negotiated through collective bargaining.

Current UC President Janet Napolitano pledged $3.3 million to fighting student malnutrition after the release of the student survey research. UC’s plan includes emergency food pantries, budget cooking lessons and donations to student meal plans. Dreier specified that these programs cannot be expanded to employees; he believes the needs of workers are different from students and will require an entirely different approach.

The UC system is not alone in pursuing a higher minimum wage — the state of California recently became the first state to raise the minimum wage to $15 by 2022. Some cities, such as Los Angeles, plan to independently reach $15 even sooner. Yet this new wage only corresponds to an actual living wage in households with single adults or two working parents with at most one child.


“Employees don’t need charity,” Dreier said. “They don’t need to be told how to manage their budget. What they need is more money.”