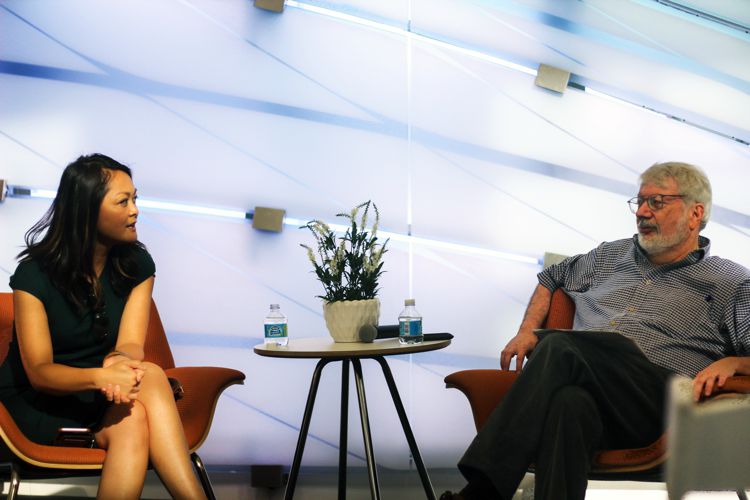 Carmen Chu, assessor-recorder of the city and county of San Francisco and Occidental alumna, visited the college Oct. 25 as the first speaker of Occidental’s newly-introduced Distinguished Alumni Series. While on campus, Chu participated in both a faculty-student lunch in the Johnson Student Center and a public forum in Choi Auditorium. During the forum, she spoke about her path from Occidental to elected office and the obstacles she faces and overcomes as a first-generation Asian American and woman in politics.

The new series is a collaboration between the Politics and Diplomacy and World Affairs departments that began with an informal meeting between Professor Shearer, Professor Caldwell and Professor Jacquette last semester, according to Professor Roger George, who helped choose the alumni speakers. Politics Professor and Urban and Environmental Policy (UEP) Department Chair Peter Dreier proposed that Chu, his former student, be the first speaker in the series. George extended an invitation to Chu and determined the logistics of her visit.

Chu began her visit with a lunchtime meeting that included faculty from the Politics and UEP departments as well as three student workers from the McKinnon Center for Global Affairs. Chu was most interested in hearing students’ perspectives on campus culture, student activism and faculty-administration relations.

Andrea Tuemmler (junior), a program assistant at the McKinnon Center for Global Affairs who helped advertise Chu’s visit and attended the lunch session, appreciated how the lunch session brought together faculty and students who would not normally have the chance to interact.

“Carmen Chu was very thoughtful and listened with the intent to understand our perspectives,” Tuemmler said. “Even though she listened much more than she spoke during the lunch, I left with the feeling that she was genuinely interested in processing our conversation to figure out how it could apply to the challenges she faces in her job.”

Regarding her path to Occidental, Chu touched on her identity as a daughter of Chinese immigrants growing up in Los Angeles. She recalled that seeing the Los Angeles riots and the disruption they brought to her family’s restaurant as a student in middle school sparked her interest in public policy and helping people with few opportunities.

Upon arriving at Occidental, Chu received the James Irvine Foundation Fellowship. According to Professor of Politics and Chair of the UEP Department Peter Dreier, this fellowship once provided full-ride scholarships to 10 first-year students from low-income backgrounds.

In her remarks, Chu explained that this fellowship allowed her to pursue her interest in public policy at Occidental. As a UEP major, she worked in partnership with another student, Martha Contreras ’00, on a senior comprehensive project that examined building political coalitions between Latino and Asian immigrant communities.

“It was a brilliant senior comps project,” Dreier said during the panel. “Really incredible. It should have been published, actually.”

Chu recalled her trajectory from Occidental to a Public Policy and International Affairs (PPIA) fellowship that allowed her to complete a Masters in Public Policy at the University of California, Berkeley. She then touched on her transition from a bureaucratic position in the San Francisco’s budget office to the elected county board of supervisors’ position, followed by the assessor-recorder position she now holds.

Dreier introduced Chu during her panel by recalling the recommendation letter he wrote for her. He said he knew she was destined for greatness, but, since she was introverted and policy-oriented, unsure of whether she would pursue public office. He ended his introduction by expressing how grateful he was that she did.

“I think Peter [Dreier] expressed it pretty well [during the panel], that it’s impressive that someone like her would go into public service, recognizing how much good government can do,” George said. “Often, I think government gets a bad rap, particularly in this election, where Washington is seen as the cause of all the problems.”

Throughout the panel, Chu covered her record and the topics of government transparency, gentrification, how her office decides property value, the challenges of advocating for communities of color and how she strives to be a role model for women and minorities in politics.

“As a woman in leadership you are constantly thinking about how you are upholding yourself and how you are carrying out your job because you’re setting an example,” Chu said.

She closed by expressing disgust at Fox News’ widely condemned recent coverage of Chinatown, New York. However, she countered this disgust by saying she is an eternal optimist and still positive about the future of American politics.

At present, Chu is committed to the work she does as assessor-recorder.

“I think there’s always a perception that you’re aiming for the next thing or you’re sort of getting ready for your next election or your next run,” Chu said. “Perhaps I’m a bit of an atypical politician in that way.”

Chu’s visit was recorded by the Center for the Digital Liberal Arts, and can be viewed in full on the Center’s Vimeo account as part of a collaboration between the Young Initiative and the Agora Project, a student-run program that records campus events.