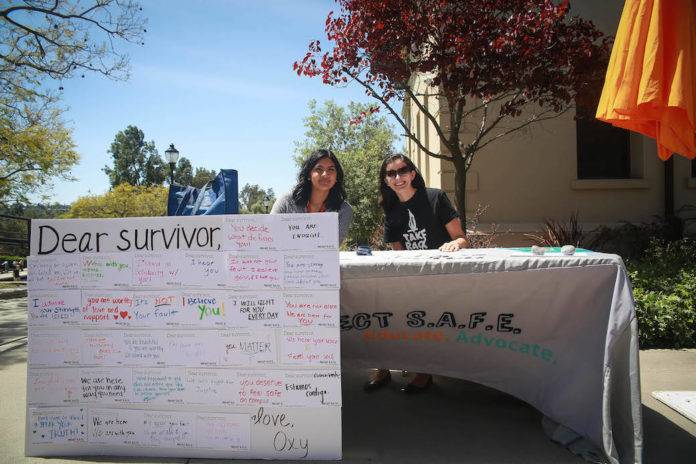 Project S.A.F.E.’s Take Back the Week (TBTW) featured events April 11–15 ranging from a film screening to a speak out. Throughout last week, Project S.A.F.E. staff members spoke with students during lunch on the quad and handed out “Take Back the Night“ T-shirts.

Students were able to write messages to survivors at Project S.A.F.E.’s table in the quad, which were then posted on its Facebook page as a part of the #DearSurvivor project. The #DearSurvivor project was created by the YWCA Silicon Valley Support Services Department and stems from the idea that sexual assault survivors are seldom given words of support that they should receive. The messages that Occidental students wrote ranged from “We’re with you” to “I’m sorry our system has failed you, but we will not.”

TBTW is an international event and nonprofit organization with the mission of ending sexual, relationship and domestic violence. TBTW is an expansion of Take Back the Night, a national event that began as a march to raise awareness about sexual assault and survivors’ experiences. Occidental expanded the event, developing programming for a full week dedicated to informing, supporting and building community around issues involving sexual assault.

The week began with a screening of “The Mask You Live In,” a documentary discussing how toxic masculinity shapes boys, men and communities through teaching dominance and aggression. Choi Auditorium was packed for the screening and subsequent discussion with Politics Professor Caroline Heldman and Executive Director of the Ever Forward Club Ashanti Branch, who were both featured in the film.

Other events included a self-defense class for women held by Peace Over Violence Thursday, as well as an art workshop Friday led by Eve Andry, who teaches with the nonprofit Art and Creativity for Healing, using art and creativity as an outlet for healing. Project S.A.F.E.’s emails promoting the events said that the objectives of both programs were similar in advocating self-expression and individual empowerment.

The Clothesline Project, a consistent component of TBTW created to visually represent survivors’ experiences, was relocated from its usual place between the Cooler and the Marketplace to inside the Bengal Room. According to Marianne Farewell, Project S.A.F.E. program coordinator and prevention education specialist, this change was made to incorporate feedback from survivors.

“Last year we were given feedback that survivors couldn’t even get a meal during the week because it was too triggering to go through that part of campus,” Farewell said. “By having a smaller version of the Clothesline Project in the Bengal Room, it becomes a choice [to see it].”

Farewell said that by moving the project to a more isolated location, some of the powerful public statement is lost, but she believes it is important to be aware of survivors’ needs.

Hanging up a red shirt on the clothesline meant coming forward as a survivor of sexual assault, a purple shirt represented LGBTQIA+ individuals who have experienced sexual violence and a white shirt symbolized knowing someone who had died because of sexual violence.

She said that Project S.A.F.E.’s end goal is to be able to find balance between creating enough public awareness to supply the larger community with resources and tools to support survivors around them, while staying discreet enough to ensure that survivors do not feel uncomfortable on campus.

With the same intention to provide a safe space, survivors, students and community members met in the Greek Bowl Thursday night for a speak out, Occidental’s version of Take Back the Night, according to Karla Aguilar, Project S.A.F.E. manager and survivor advocate. While other colleges hold marches or vigils to honor people who have been lost to violence, Occidental’s speak out was created with the sole purpose of healing through sharing in a confidential and private space.

“We stay there until everyone who has something to say feels as though they’ve gotten everything out,” Farewell said. “It’s extremely brave and provoking for survivors to be able to share their stories, but the solidarity that comes from being able to listen and for others to learn that they’re not alone is equally as powerful.”