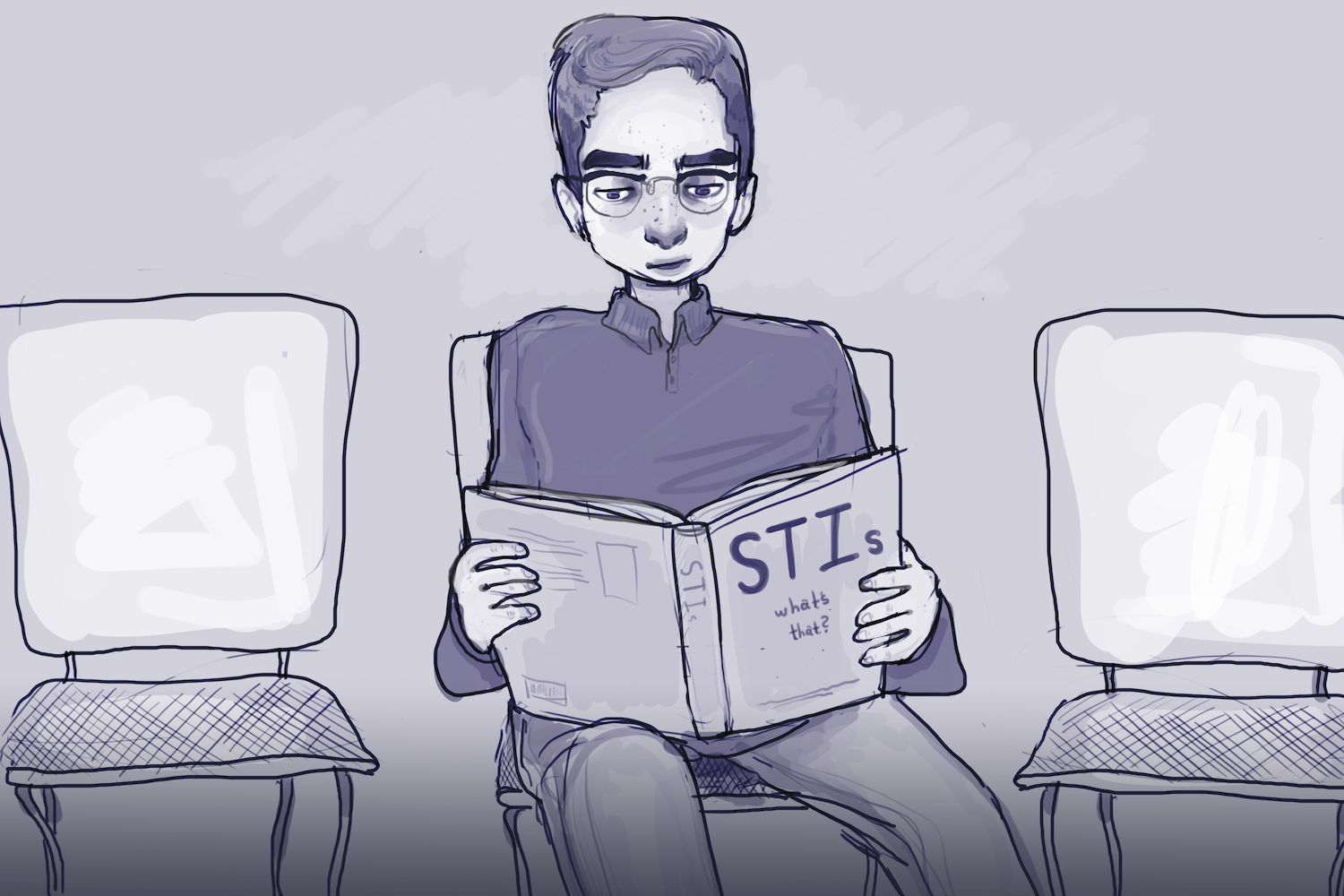 She understandably thought, even with protection, that she had contracted the World Record’s worst case of herpes. But instead of telling her parents and getting treatment, she hid it from them. She was too scared to tell her mother that she was having sex, much less that she had full-body herpes. But after two weeks, she finally broke down. She told her mom, a healthcare provider herself, and they made an appointment with a gynecologist, who confirmed the worst.

“[The gynecologist] is looking at my vagina and she’s like, ‘This is mega-herpes,'” Natalie said.

Even worse, the medication from the gynecologist didn’t work. Her panic grew: What do I do? Do I just live like this? Do I get help? How do I get help? Am I a bad person? I am a bad person.

She soon went to her pediatrician, who realized the gynecologist’s diagnosis was wrong. The sores weren’t from herpes at all. They had been caused by an allergic reaction to the spermicide in the condoms. She took Benadryl and the sores were gone within days.

This story exemplifies some glaring flaws in the way we as a society and as a college campus, think about STIs and sexual health. We seem to be too terrified of them to talk about them — I know I’ve been. And that fearful silence can’t bode well for our collective sexual health.

I wanted to find out more. So I asked around Emmons Wellness Center and Planned Parenthood Club and it turns out that at Occidental College — when it comes to sex — we’re really not very healthy.

According to Alex Morse (junior), co-president of Occidental’s Planned Parenthood Club, one in four students will contract an STI — that’s four people you know from your first-year CSP. This is partly due to ignorance, since, according to Morse, a lot of students just don’t know that much about STIs.

“Students come from every state in the country and around the world, and so we come into Oxy with no baseline [sex education],” Morse said. “I had abstinence-only education in the state that I’m from.”

If students had more comprehensive sex education before college, they might know, for example, that chlamydia and gonorrhea — the most common STIs for college students — are completely curable with seven days of antibiotics. Even herpes is far more manageable than popular knowledge would suggest. In fact, most people will get herpes in their lifetime. You might have mild herpes right now and not even realize it, as not all carriers will exhibit symptoms. And even at its most serious, herpes can easily be kept in check with daily anti-viral therapy.

But as Morse said, since students, by and large, don’t know much about STIs — I certainly didn’t — they are absolutely terrified of them. And since we’re scared of them, we don’t talk about them.

“The problem is that people are afraid to get tested and to have the hard talks,” Morse said.

Let’s get back to Natalie. Since we live in a culture that equates any given STI with a zombie virus, Natalie waited two weeks to tell her mother she thought she might have an STI — even though her mother was the one who got her the condoms in the first place.

But that fear makes sense, considering the abuse she received in school after the sores showed up. Her high school classmates bullied her almost constantly, and — instead of supporting her, the boy she’d slept with broke up with her, proclaiming to his peers that he had not been contaminated. Natalie said that given this ostracization, of course she was afraid to talk about it, even with a supportive parent like her mother.

The stigmatization of STIs is dangerous for our sexual health, both emotional and physical. On a physical level, things get really nasty when the viruses go untreated. For example, chlamydia can lead to something called pelvic inflammatory disease, which can cause infertility in women. It’s so important to get tested regularly, to keep up with STIs and to treat them as soon as possible.

This is where Emmons comes in. Our wellness center provides as many resources as it can to make sure its students are well-informed about their sexual health and empowered enough to take charge of it. At orientation, incoming first years and transfers attend a sex education seminar from Emmons staff. Sara Semal, senior director of student wellness services, said that Emmons staff has worked with the Student Wellness Advisory Council to put on events promoting sexual health. The council also trains student advisors from Peer Health Exchange (PHE) and regularly works with other student groups like athletic teams and Greek organizations, who ask for the council to speak at some of their events.

Additionally, Emmons nurse practitioner Cindy Bacon said that she regularly talks to students on an appointment basis to answer questions they might not be comfortable asking in a group setting.

“Sometimes I’ll have people ask me about basic sexual intercourse and things like that,” Bacon said. “Also we get into a lot of pregnancy prevention. We have a lot of education around that.”

In addition to these educational programs, Emmons offers medical resources as well. The most prominent of these is its free STI testing on campus. A few weeks ago, I personally got tested at Emmons for STIs, and it was the easiest thing I did all day. I barely had to do anything, just put a q-tip in my mouth and pee somewhere slightly different than where I had otherwise planned to. I was in and out in 15 minutes and it was free. With that little effort, I got tested for gonorrhea, chlamydia, and HIV/AIDS. And — if I wasn’t such a needle-phobic snowflake — I could have gotten a blood test for syphilis as well. Anyone who is having regular sex should take advantage of this.

And, to an extent, all this seems to be working. Emmons nurse practitioner Cindy Bacon said that they book plenty of STI testing appointments — they can’t say exactly how many because of FERPA. But, according to Bacon, there are still students who are afraid to come in for testing at all. Semal said that, for some, this is because some students are conflicted about sexuality, to begin with.

“There are a lot of cultural and institutional backgrounds that people bring with them,” Semal said. “Shame around their sexuality, and what it means to have to get tested for something you’re already conflicted about. It’s very, very individual.”

Semal also said that Emmons’ psychological and medical staffs work together when appropriate. For instance, if a student says something in a counseling appointment that might indicate they could benefit from testing, the counselor will refer the students to the resources available to them, and vice versa.

Emmons staff strive to make this process as painless, both psychologically and physically, as possible.

“We strive to make the process of getting tested or talking about sex and sexuality a completely non-judgmental process,” Semal said.

Bacon has said that this approach has had positive effects.

“A lot of students come to see me and I can tell there’s an uncomfortability or awkward feeling around what they want to tell me,” Bacon said. “But I hope that they always leave feeling comfortable … I think once people leave, they feel much more comfortable coming back again.”

Though Emmons provides resources for sexual health, it can’t address the root of the problem — people feel uncomfortable asking their partners about STIs.

“They don’t want it to seem too serious; they don’t want to seem like they’re asking too much,” Morse said. “People are very hesitant because it feels like a commitment. It feels uncomfortable.”

It’s tough to know what to say during or after sex, or even if you should say anything at all. Maybe you drunkenly make out with a stranger in the Jailhouse garage or you finally work up the courage to kiss one of your friends on top of Mt. Fiji or you’ve just come back from your third date at wherever the f*ck people go on dates, in the early chapters of what you hope will develop into a satisfying romance.

But imagine how long Natalie would have been covered in sores if she had never spoken up. Talk to each other, tell the truth and get tested. It’s quick and free — like most of your hookups.

Planned Parenthood Club at Occidental College can be reached either by email at plannedparenthood@oxy.edu or by Facebook.