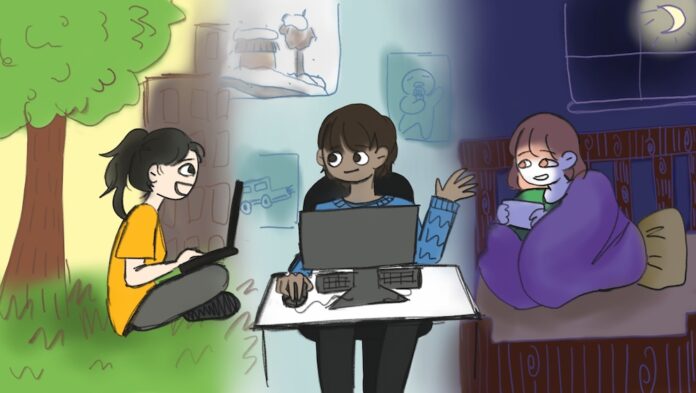 Citing LA county guidance, Occidental has been in a remote learning structure for the entirety of the 2020-2021 academic school year. As a result, the first-year class has been experiencing the school year in varying ways, as most students have yet to step foot on Occidental’s campus. Instead of the usual convocation ceremonies or Orientation Week dances, the Class of 2024 began their first year of college online from different time zones and living situations, connecting with their classmates through a screen rather than in person.

The first-year experience is a part of many American colleges and universities’ efforts to help their students make the adjustment from high school to college. For example, Occidental’s program includes first-year-specific residence halls that offer programming and outreach.

Mali Abel (first year), started college from her childhood bedroom in New York City. For her second semester, Abel said she decided to move to Pasadena to live with another first-year student and be closer to campus.

“I decided to move out to LA because the three-hour time difference was difficult, and I felt like I needed to have that independence,” Abel said. “It’s definitely added more of a college experience, because I’m also a part of the off-campus testing program, so I get to go on campus twice a week.”

Celia Fragale (first year) and Julia Mundell (first year) also moved to LA for their second semester, having both started the year in their hometown, Seattle, WA. Fragale said she has learned skills living in her LA apartment that she would not have learned in a typical college setting, leading her to take on more responsibilities than she originally anticipated.

“If we were [learning] in person, I wouldn’t have to clean the bathroom or cook dinner,” Fragale said.

Ben Wilson (first year) has been studying from home in Louisville, KY. He said that while he feels he made the right decision to stay home, seeing other students moving to LA on social media and gaining independence has been difficult for him.

“On social media, you’ll see students meeting up or going out to explore Los Angeles, and it’s definitely hard to feel like you’re missing out,” Wilson said. “Of course, that’s no one’s fault. It’s the nature of our situation, it’s just hard to see that online.”

Abel has been serving as one of the first-year class senators for Associated Students of Occidental College (ASOC). She said that has been her primary activity in addition to Active Minds, a club dedicated to the discussion of mental-health-related issues.

According to Wilson, joining clubs has been a challenge due to Zoom fatigue. However, Wilson said he has joined InterVarsity, a Christian fellowship group, which has provided him with a social experience to complement the academic portion of his college experience.

Fragale and Mundell said that it has been difficult to meet people, but Mundell said she was able to make some friends through her immersive semester, a new program at Occidental that includes coursework and community-based components that center around a field of study.

“It’s harder to get involved not having met anyone in person,” Mundell said. “I have found clubs that I’m excited to join in the future, but I don’t think I can handle another organized Zoom commitment right now.”

During the fall semester, her immersive semester group was organizing group calls to connect in a non-academic environment. Mundell said she appreciated this sense of camaraderie despite not having in-person meetings.

According to Fragale, independently organized Zoom meetings have been a good resource for meeting new people. While Fragale was not involved in an immersive semester program, she said that she appreciated the opportunity to attend virtual study groups for her classes.

Wilson said meeting new people has been the most difficult part of remote instruction.

“It’s just so awkward to reach out,” Wilson said. “Oxy has given us opportunities to meet other students, but at the end of the day, they’re all still pixels on a screen. It’s just so much more effort to reach out to people than when you’re in person.”

Abel said that making friends online, through Facebook and Zoom, has been easier than she had anticipated.

“Breakout rooms have helped, and social media has brought us together in a sense,” Abel said. “I’ve also just had to get out of my comfort zone. I’m not usually the one to make the first move, and I’ve started doing it because someone has to.”

According to Abel, meeting people in LA has been impacted by the pandemic, despite her success connecting online.

“I’ve been able to see some people socially distanced, which has somewhat of a college feel,” Abel said. “But it definitely feels weird, even though we all try to make it feel as normal as possible.”