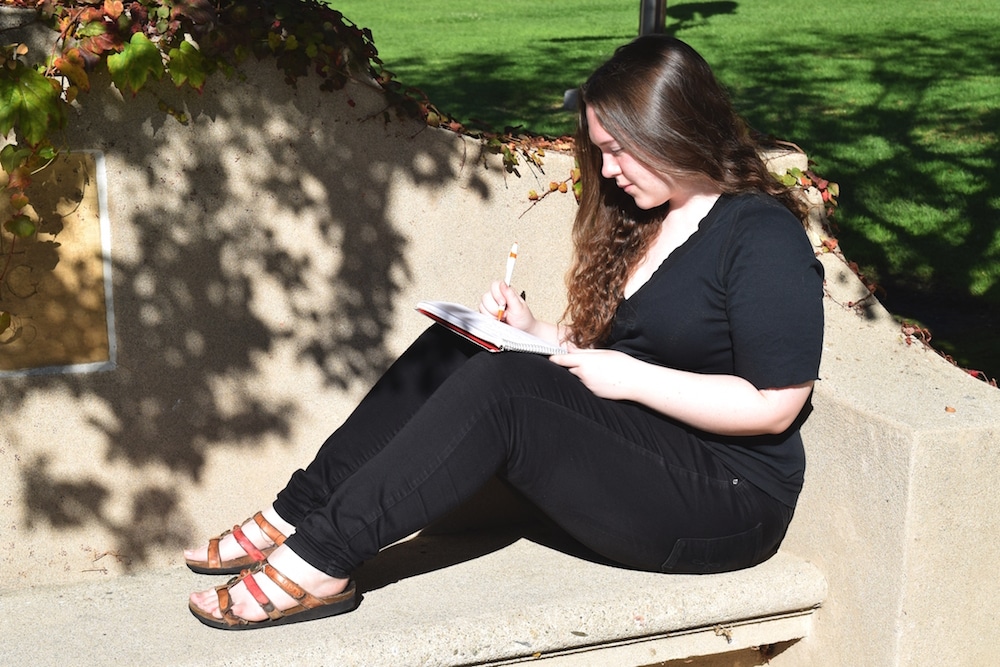 Students seeking to engage in expressive forms of writing away from the stress of their ominous coursework now have an opportunity: the Creative Writing Club. The club currently meets twice a month, Mondays from 7:30–8:30 p.m. in Johnson 313; meeting times are subject to change based on the needs of its members and the timing of other creative writing classes on campus, according to its president, Perrin Shyne (sophomore).

Shyne began forming the idea for the Creative Writing Club during the Spring 2017 semester, and its first official meeting took place in early October.

“I’ve always liked creative writing, and one of my favorite things about it was being able to talk with my friends and brainstorm together,” Shyne said. “It’s really enjoyable to build stuff with other people, and there wasn’t really a place to do that on campus, so I wanted to build a community where people could find other writers and write together.”

Nikita Wolf (sophomore), the Creative Writing Club treasurer, appreciates the outlet that the club provides for students — even those who do not typically consider themselves writers.

“Creative writing isn’t really something that I thought I was interested in, but then I realized that I really like writing poetry, so I thought [joining with the club] would be a good opportunity to expand on that,” Wolf said.

According to Shyne, a typical club meeting begins by members of the club introducing themselves and then playing a few creative writing games as warmup exercises. These games can include one in which each member of the group writes a sentence of a story on a piece of paper, folds it over and passes it to the next person; the next person continues the story while only being able to read the previous person’s sentence. Another game involves selecting a person to lead the game, who then imagines the plot of a story in their head. The other players guess the plot using only “yes” or “no” questions.

Shyne explained how the group then comes together for a feedback session, where students help each other fine-tune their ideas and work through any problems they  encounter in their writing. Shyne encourages members to write creative pieces in their free time although they are welcome to workshop writing from classes or previous meetings.

“We have two meetings a month, so the first meeting we do a more formal workshop, where someone brings in a piece that they want comments on,” Shyne said. “Then, for the other meeting, we have more of a reading. The audience members, of course, will ask questions, but it’s not a formal, feedback style.”

After the feedback session, members have the opportunity to write new material guided by a prompt, according to Shyne. The Creative Writing Club’s academic advisor, Writing and Rhetoric professor Sarah Ostendorf, plans to introduce new elements to meetings in the future, including lessons on writing and workshopping and readings from published authors.

“In the writing department, in particular, we have the [WRD 301] Creative Nonfiction workshop and, of course, several other creative writing classes,” Ostendorf said. “So while we encourage all students to take these classes, a lot of students who have done these classes already want different outlets for their writing. The main goal right now is to figure out what people need and how we can best serve that need.”

Although the club is still in its early days and has not yet had the opportunity to hold many events, Shyne aims to build partnerships and host events with other campus clubs in the future. She is also planning a “Submit-a-Thon” with the help of English professor and published author Zinzi Clemmons. The event, which will take place next semester, aims to motivate students to submit their writing to as many publishers as possible in an effort to encourage groups who are underrepresented in the field of creative writing, such as women of color, to publish their work. Shyne commented on why these groups are not often published.

“Part of the reason [these groups don’t get published] is discrimination when it comes to publishing, but another reason is that men are much more likely to submit stuff,” Shyne said. “In general, during the meetings, we try to show people one writing contest or writing opportunity. So we’ll sort of build on that, have a little party, try to make sure everybody gets something out there in the world.”

Currently, the Creative Writing Club has about 10 members, but both Shyne and Ostendorf hope to attract more as the club evolves. Despite its small size, Shyne says that its members produce works from within a wide variety of genres, including poetry, science fiction, realistic fiction and creative nonfiction.

Any students interested in honing their creative writing skills can contact and join the club via its Presence page.