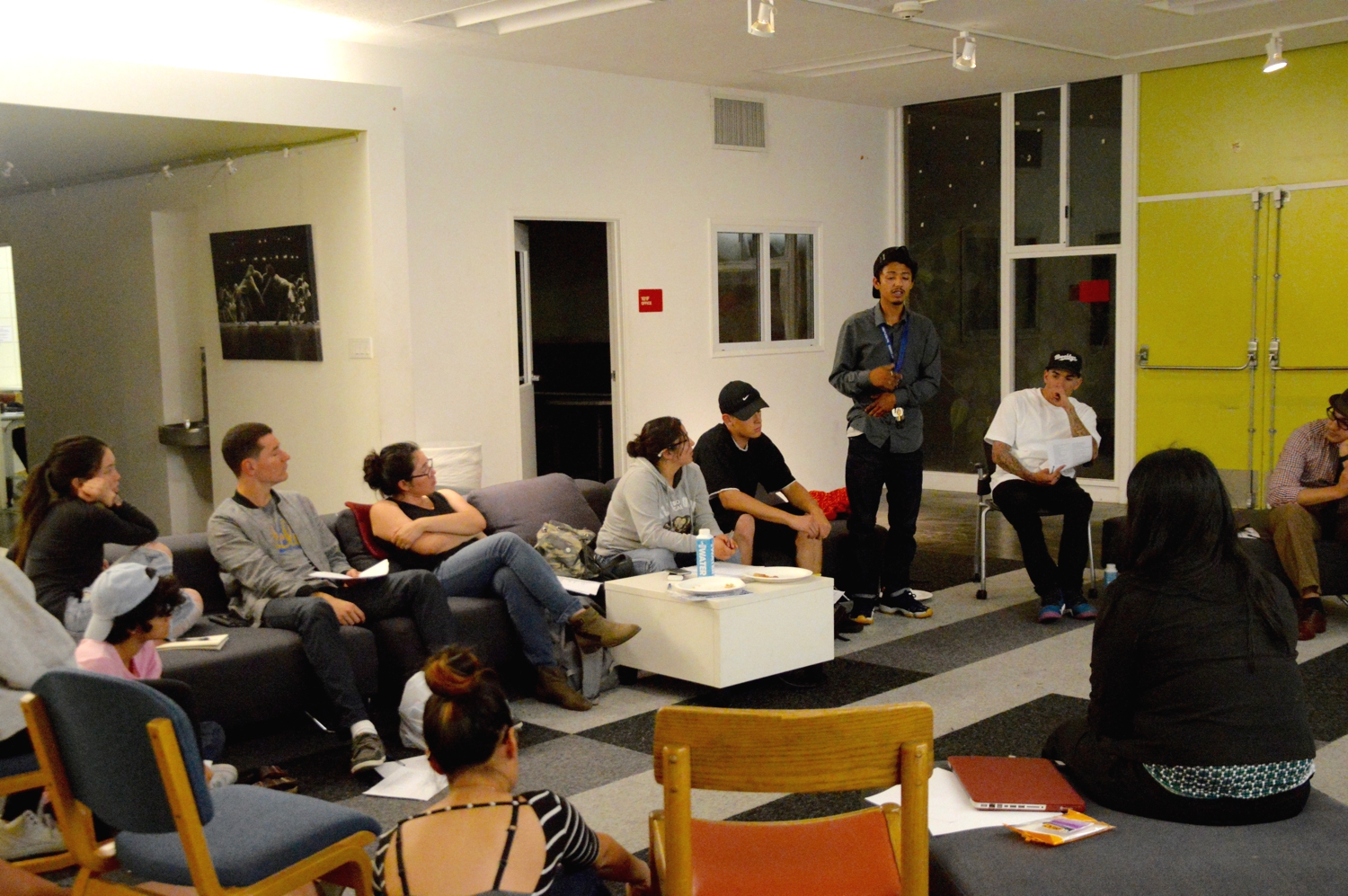 Just off the corner of Lexington and Vermont Ave in Pasadena, CA, stands a white and brown two-story building. On its upper-right corner, a large, rectangular sign reads “IOW: Inside Out Writers.” Inside, a staircase leads up to a second floor, and to the left, a room with several foldout tables and chairs that form a circle. This is where the writing happens.

Every Thursday night, IOW, a program that aims to reduce the juvenile recidivism rate, opens their doors to anyone who wants to write. A majority of those who attend have recently been released from prison or have been incarcerated at some point in their lives. IOW also has three writing circles that happen every week in Los Angeles — at Central Juvenile Hall, Los Padrino Juvenile Hall and Barry J. Nidorf Juvenile Hall — that encourage incarcerated youth to continue writing in Pasadena when they are released. These members call themselves “IOW alumni.”

By standard definition, recidivism means, “a tendency to relapse into a previous condition or mode of behavior; especially: relapse into criminal behavior.” In other words, this refers to the vicious cycle of re-incarceration that occurs after youth are sucked into the system and released with no means of support or assistance.

Occidental has had a community partnership and close relationship with IOW for six years. According to Ella Turenne, assistant dean for community engagement, Sociology Professor Richard Mora and Critical Theory & Social Justice (CTSJ) Professor Mary Christianakis have been volunteering at IOW for many years and have played a key role in fostering a fellowship with IOW.

“Our work has always been collaborating with alumni,” Turenne said, referring to IOW writers. “Myself and Professor Zamorano taught a class at some of the juvenile halls.”

IOW came to Occidental Tuesday, April 4 for their annual writer’s circle and open mic in the MLK Lounge in Pauley Hall. The evening began with an introduction from event organizer Cynthia Magallanes-Gonzalez, (senior) who has been involved with IOW since her first year. Several Occidental students and IOW alumni, including Lorena Villanueva, an alum and case manager for IOW, were present.

“The writing was a big factor in healing for all of us,” Villanueva said.

As a case manager for IOW, Villanueva works with people who have been released from correctional facilities. Many of these people are teenagers and young adults.

“Working with these kids, it’s one of the hardest things because of what they’ve all been through,” Villanueva said. “But it’s also the most rewarding.”

The theme of Tuesday night’s writing circle was “resilience.” Everyone introduced themselves and then two IOW alumni read two poems, one by poet Martín Espada, the other by rapper Tupac Shakur. The group discussed both pieces and then everyone had 15 minutes to respond to the one-word prompt: “resilience.” All those in attendance shared what they had written.

“IOW gives people the tools to develop resilience inside and to work through their own traumas and express them in a way that doesn’t involve violence,” Ryan Lo, a facilitator of IOW weekly meetings, said. “It gives a voice to people who have never been heard.”

Lo, as well as a filmmaker and Soros Justice Fellow for the Open Society Foundation, was incarcerated for 23 years and 12 days. He went in at the young age of 17 and came out when he was 40. Writing is not only something he enjoys but necessary for his own peace of mind.

“Writing is a way of deliberately organizing my thoughts,” Lo said. “My head is chaos. I’m not happy if I don’t have nine plates spinning at one time, and that makes it hard to sleep at night. Writing is my way of stopping a plate long enough to process what is there.”

IOW has teachers and mentors to work with youth who are at risk of going back to prison. Matthew Mizel is one of these teachers. After working with alumni at IOW and youth inside correctional facilities, Mizel convinced his friend and film producer Scott Budnick to come into Sylmar Juvenile Hall so that he could meet young adults facing obscenely unjust sentences.

“He went into Sylmar Juvenile Hall, and he met a kid who was 15 who had a 300-year sentence,” Lo said. “He met a 16-year-old who had life without parole and he said ‘I don’t understand. How are we throwing away children and people aren’t protesting in the streets, what the f**k is happening?'”

Soon after, Budnick became a teacher at IOW and continued to teach at Sylmar Juvenile Hall. Seeing young adults who had been given five-year sentences released into society with no means of support, care or guidance convinced him to create the Anti-Recidivism Coalition (ARC).

“When these kids were living in these neighborhoods and had parental and peer support, they got chewed up. We snatch them out of these communities, traumatize the f**k out of them by throwing them into adult prison and then drop them back off at the same place. We as a society don’t get to be surprised when they go back to jail if we do that,” Lo said.

After getting released from prison, Lo felt what he refers to as “survivor’s guilt,” as many of his closest friends remained in prison with no hope of escape. Because of this, Lo began doing policy work and joined the ARC.

Lo ended up at IOW after talk about merging IOW and ARC. He quickly realized that by merging the two organizations, IOW would lose its special quality of openness.

IOW is not only a safe space for people to come find a voice, but also a place to connect and feel solidarity in trauma through written word.

“We live together alone, in this world,” Lo said. “We all think that our story is unique, that our trauma is our own. You come to IOW and you write something, and you realize that yes, we’re living together alone, but we’re not completely alone. We think no one can understand what I’ve been through or the horror show of my life, and then you realize, they’re all horror-stories. We’re just looking at them through different lenses.”