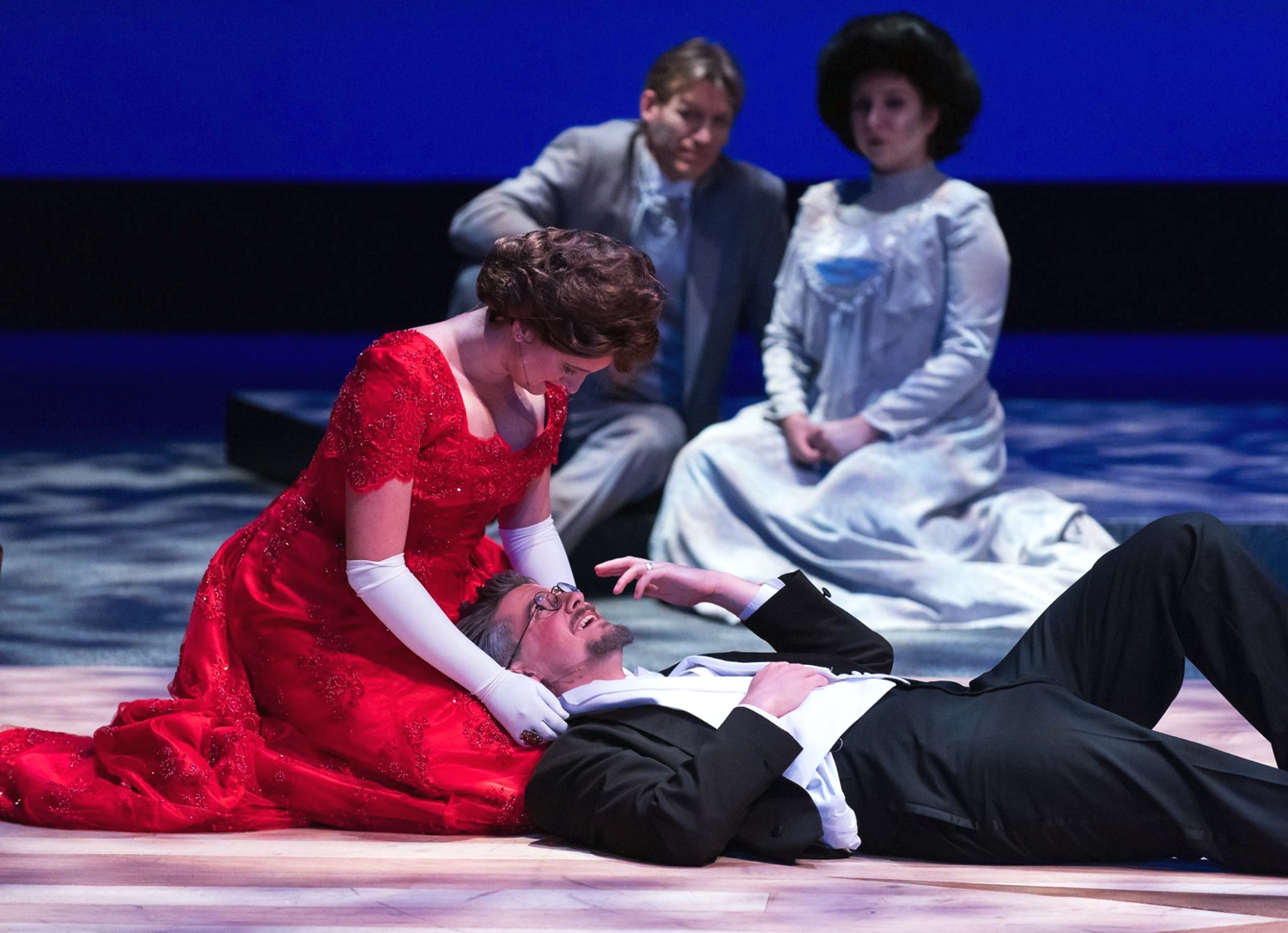 The Occidental theater department brought audience members back in time to 1900s Sweden with the opening of the musical “A Little Night Music” by Stephen Sondheim April 14 at Keck Theater. Director John Bouchard and Music Director Désirée La Vertu led a cast of 18 students through the intricacies of the Tony award-winning musical comedy. The play follows the romantic entanglements surrounding actress Désirée Armfeldt, played by London Murray (junior), and the two men who love her: Frederik Egerman, played by Rhys Hyatt (senior) and Count Carl-Magnus Malcolm, played by Charlie Haakenson (senior).

Set to waltz time or waltz time variations, “A Little Night Music” has been described as having some of the finest music in American musical theater. Billy Schmidt (senior), who plays Henrik Egerman, said his part is written for a trained opera singer. According to Schmidt, it was not until the orchestra was added that he truly understood the show’s musical journey.

“Most of the songs in the play are dead serious and psychologically complex, some of the songs are like Shakespeare in how much Sondheim captures with the lyrics, but the rest of it is a comedy. Now with the full orchestra, it’s like ‘Oh, this is what the play is like!’” Schmidt said.

According to Hyatt, both the show’s music and the characters present a complexity he has not seen in other musicals. Hyatt has been in seven shows while attending Occidental, but he has never a done a musical with this type of music or set in this time period. As he prepared his character, Hyatt worked to find a balance between Frederik Egerman’s composure and emotionality. The richness of the character gave him room to interpret and create a realistic character.

“I was truly attracted to the role of Frederik because he is a very complex character. When you come across musicals, not necessarily Sondheim, there’s all these archetypes … Frederik is a very realistic character and he is the most complex especially to the audience,” Hyatt said.

Murray was drawn to theater from a dance background and was excited about the show’s dance numbers. She is also a two-time choreographer for Dance Pro. All of the dances were ballroom waltzes, but Murray noted that the music is a quicker version of a waltz tempo making dancing difficult. Guest Choreographer Jenna Dillon helped the cast learn the intricate moves. Waltzing was especially difficult for Murray who initially learned ballroom waltz as a leader, not a follower.

“Waltzing is difficult as a follower because I have to go backward and when I first learned waltz, I always did the leader because there weren’t enough guys in the class. When I learned waltz, I never learned how to follow, so my partners are not happy with me,” Murray said.

Behind the scenes, stage manager Nick Justice (senior) made sure all of the transitions and cues ran smoothly. Justice is a first-time stage manager and decided to pursue the project for his comps after studying acting, lighting design, costume design, stage makeup and directing in the department. According to Justice, the role of the stage manager is to act as a communicative bridge between all the different elements in the show and is the one who makes sure the show happens as it is supposed to happen. Justice previously worked with Bouchard in two shows and noted his unorthodox approach to directing.

“John very much recognizes that he is improvising as a director. He doesn’t know what he wants and he is discovering it which can be very fun to watch,” Justice said. “The process of watching how this musical was created has been the most fun I’ve had … watching the way it’s come from nothing to something and that’s what has also made it so stressful as a stage manager as the person who has to know what’s going on because every night something changes.”

Murray hopes the audience comes to the show prepared to be entertained with interesting musical numbers, intricate costumes and a fun storyline.

“I hope that they are able to sit back and relax …This one is a lot of standard musical theater fluff, I want people to lose themselves in the story and to forget about their own lives for a moment,” Murray said.