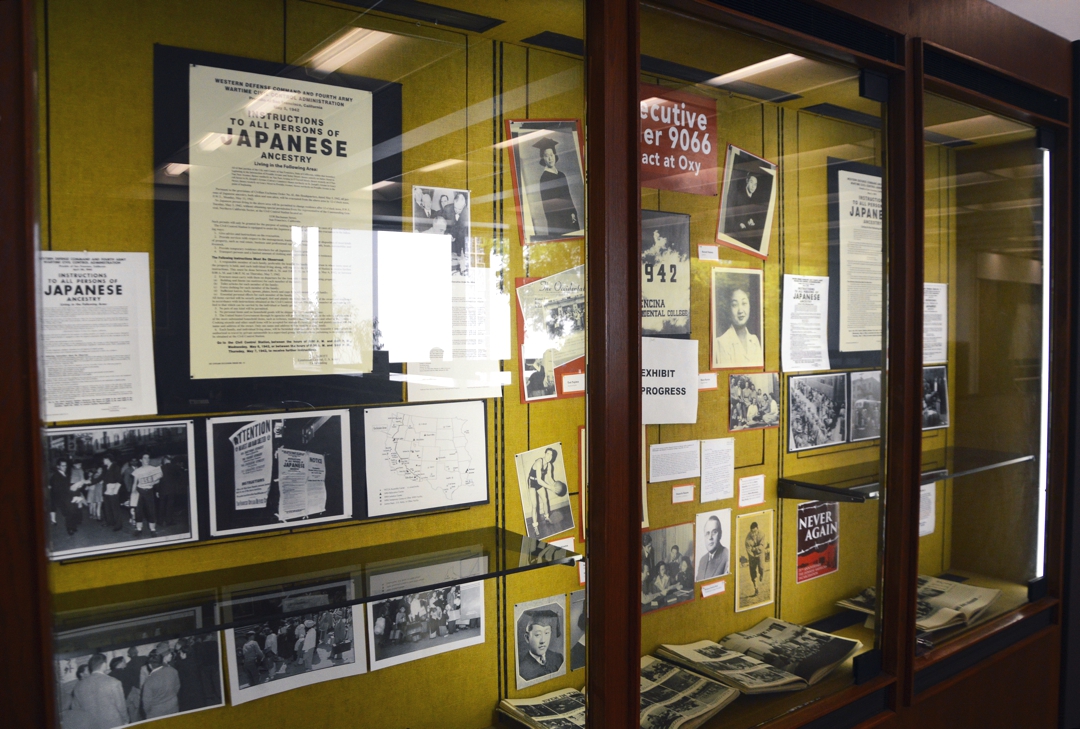 When Julie Kimiko Santos, associate director at the International Programs Office (IPO), travelled to northern California last summer to visit the Japanese internment camp at Tule Lake where her family was incarcerated from 1942–1946, she explained that she gained an appreciation for her family’s struggle that she could never have anticipated prior to the trip.

Inspired by her visit, she returned to Occidental in the Fall 2016 semester and immediately reached out to faculty and off-campus artists in order to begin building a year-long event series called Never Again. Composed of speakers, film screenings and exhibits extending through 2017, Never Again’s purpose is to remember the United States government’s incarceration of Japanese-Americans during World War II.

“My family never really talked about [camp], they never really said much,” Santos said. “That first bus ride up, in those two hours, I learned more about my family’s experience in the camps than I had in my whole life.”

Most recently, Feb. 28, Special Collections opened an exhibit featuring news bulletins, articles and photographs at the front of the Academic Commons to highlight the 75th anniversary of the executive order that sent more than 120,000 Japanese-Americans to internment camps across the West Coast. Over the course of the semester, the series also brought filmmaker Emiko Omori to campus to screen her film “When Rabbit Left the Moon,” in addition to hosting a talk from Japanese-American artist Clement Hamani about identity and the arts in Choi Auditorium.

President Franklin D. Roosevelt signed Executive Order 9066 Feb. 19, 1942, which dictated that Japanese citizens leave everything behind that could not fit in a suitcase and resettle in remote camps scattered around the country. The order affected colleges and universities along the west coast, including Occidental. This act threatened six Japanese students attending Occidental at the time. President Remsen Bird quickly attempted to mount a campaign to transfer Japanese-American students to various other institutions off the west coast where they could be protected from the order, although his efforts ultimately did save them from the reach of the U.S. government. A 500-document strong archival project chronicles Occidental’s history regarding Japanese internment. Spearheaded by Bird and the college librarian at the time, Elizabeth McCloy, it is currently located in Special Collections in the library.

Special Collections Librarian Dale Stieber explained that the library has a significant collection of President Bird’s documents regarding the potential internment of Occidental students.

“We have his correspondence with students, correspondence with the community about how to support this group of people who had been dispossessed and documentation of him saying how important it was to keep as full a record as possible of all the materials regarding this.”

Like Santos, Japanese internment is personal history for several Occidental students. Miya Moriwaki (junior) is writing a screenplay for her Advanced Narrative Practices course about the true story of her grandparent’s romance during their time in an internment camp. As Moriwaki recalled, her grandfather saw her grandmother from a distance at a temporary holding center and was intrigued by her, though they never spoke. When it came time to be sorted into camps, Moriwaki’s grandfather took a chance and signed up to do agricultural labor knowing that this would place him into the Heart Mountain, Wyoming camp where she would be. Her grandparents met and later married, but Moriwaki emphasized that they never forgot the enormous affront to their dignity.

“It’s extremely important to commemorate because a lot of people that I talk to really don’t have any experience with the history of the Japanese internment,” Moriwaki said. “I think there really is no way to move forward unless we all have an understanding of what happened in the past.”

Michelle Ito (senior) is similarly invested in the mission of Never Again. Ito’s paternal grandparents were incarcerated and forced to move into the camps while they were trying to receive their college degrees. She believes more events are needed on campus to raise awareness about the racism and bigotry that Japanese internment fostered.

“Everyone generally agrees that it was wrong,” Ito said. “There are huge parallels between the time of World War II and right now, and the amount of racism and bigotry and otherness certain populations are subjected to. So it’s important to remember this day, and remember that the United States really can do something like this in the name of national security.”

Ito and her family recently decided to commemorate their history by getting tattoos of their family crest. The design is composed of three ginkgo tree leaves, which, coincidentally, grow on Occidental’s campus.

“When I saw the ginkgo leaves at Oxy, I felt like this could be a safe place,” Ito said. “Especially given the school’s history during the internment.”