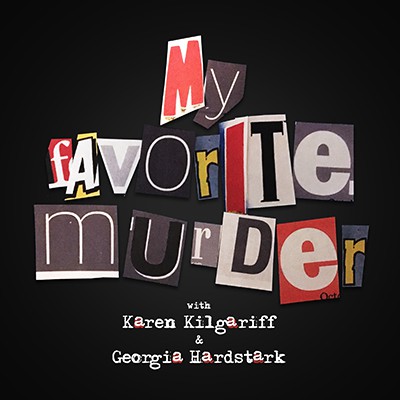 Almost one year ago, Echo Park-based comedians and long-time friends Georgia Hardstark and Karen Kilgariff got together to talk about what any anxious young adult who grew up reading Goosebumps fears — murder. Now as adult women, the duo has grown out of the fictitious spooky tales and moved on to real life horror stories, particularly tales of murder. These two comedians are obsessed with murder, and you should be too.

Comedy and murder may seem like an unlikely pair but Kilgariff and Hardstark make it work. Rather than make light of the issue, the comedians use the stories from terrible events that happen every day to develop cathartic conversations. This podcast isn’t flashy, hard-hitting crime investigation. Instead, it is a proudly low-budget comedy podcast dedicated to sharing stories about murder. The stories are told casually, making the podcast both interesting and therapeutic. Through comedy, they address their own (and some of our) anxieties about the chaos and danger of life. Hardstark and Kilgariff began their podcast, “My Favorite Murder” (MFM) to indulge their obsession with true crime. Each hour-long episode includes the two sharing a murder story with one another and filling the space in between with tongue-in-cheek true-crime life advice, such as, “You’re in a cult, call your dad,” a nod to Jim Jones and the Peoples Temple cult of Guyana.

Recorded on Hardstark’s couch in Echo Park, the podcast makes you feel as if you are at a giant slumber party. The two jokingly advise their listeners to “Get a job. Buy your own shit. Stay out of the forest.” Despite their humorous banter, the podcast isn’t about making light of murder. Rather, the two have a candid and comedic conversation about horrific things that happen in life. Admittedly, the specific details of the stories aren’t always 100 percent accurate (as both admit to using Wikipedia on occasion) but their mistakes add to the show’s authenticity. It is unedited, unfiltered and unbelievably witty.

“We just wanted to discuss true crime the way we did over lunch, and we just happen to enjoy making each other laugh … I think humor is a lot of people’s way to take away the fear and anxiety of a thing that scares the shit out of you,” Hardstark told the Huffington Post.

In a podcast market full of murder that includes shows such as “48 hours,” “Accused” and “Criminal,” MFM stands out in a league of its own. Kilgariff and Hardstark’s podcast was rated No. 1 in comedy on iTunes, and boasts an impressive cohort of dedicated followers they call “Murderinos.” The podcast’s Facebook page has over 77,000 members with people from all across the country, from college students to professional news reporters. The page is filled with an endless supply of true-crime discussion and a meme “mega thread.”

Whether we realize it or not, collectively Americans are obsessed with murder. We listen to “Serial,” watch “Making a Murderer” and read all about crime in the news. In contrast to how we normally treat crime by sensationalizing and oversimplifying the story, Kilgariff and Hardstark present the murders as an opportunity to delve deeper into the story and go beyond the crime. Unlike most reports of murders, Hardstark and Kilgariff relay the murder from the perspective of the victim. This podcast challenges the notion that the story stops at the perpetrator. The two use their morbid curiosity not only to be funny, but also to take a political and angry spin when necessary. Many of the crimes described in the podcast are reflections of larger societal issues such as mental health and gender discrimination, and Kilgariff and Hardstark are not shy when addressing them. The comedians are open with their own mental health. Through comedy, Kilgariff and Hardstark offer an outlet for listeners to relieve fear and anxiety that can otherwise be crippling, while being honest about the reality of life. At the close of every episode, they send this message in their one-lined mantra: “Stay sexy and don’t get murdered.”

Love a good murder? Email us at Weekly.oxy.edu or Tweet us @OxyWeekly