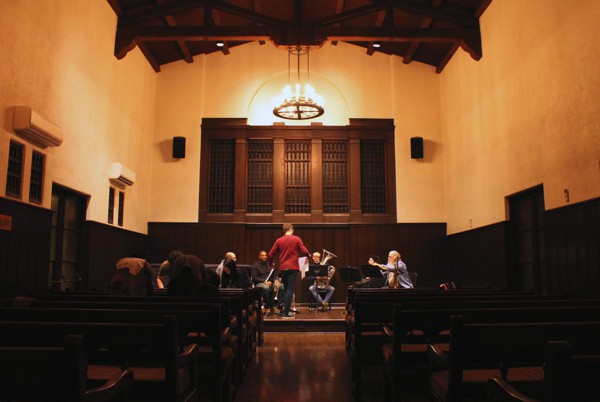 While many students spent the last full week of classes cramming for that last test or piling on sentences to reach that final essay’s word count, students in Occidental’s Composition Seminar were busy rehearsing and collaborating with hired professional musicians, polishing their own original compositions. These professional musicians brought the students’ work to life at the Composers’ Concert in Occidental’s Bird Studio Dec. 6. The Composition Seminar is taught by professor Adam Schoenberg, a Juilliard School graduate whose orchestral works are among the most frequently performed by any living composer in the country.

Though each of the eight students is a musician as well as a composer, it is not necessary to play an instrument to enroll in the seminar. The only official prerequisites are Music Theory 150 and the ability to read music — but the most important, according to Schoenberg, is a student’s commitment to expressing their own creativity.

“You can’t teach someone to have a musical idea,” Schoenberg said. “But you can teach someone how to unfold that idea, and have it transcend through time in a manner that makes sense.”

The class aims to help students grow by working on individual compositions rather than teaching the class a strict curriculum. Since Schoenberg’s arrival to Occidental in the fall of 2015, the class has moved away from classroom lectures and toward hands-on learning.

Schoenberg explained that composing is an inherently solitary process. As such, Schoenberg designed the class so that each student attends a private 30-minute lesson with him every week. The entire class gathers just once a month so that students can offer their unique perspectives on and critiques of their classmates’ work. Since most of the compositional work occurs on students’ own time, each composer gradually develops their own distinct sound.

“Everything you hear, whether you’re aware of it or not, influences you,” Schoenberg said. “So what’s beautiful about artists, and in this case, our composers is that each piece sounds very different from the other because there really are individual voices.”

Music composition major John Rehwald (junior) has played piano for 13 years, trumpet for five, began composing in high school and has still managed to find the time to take the composition seminar three times consecutively. With his 22-unit course load and his job as the orchestral manager for the Sinfonia, Occidental’s orchestral ensemble, Rehwald’s dedication to music — and to the composition seminar — is impossible to miss.

“If I were to take this semester’s composition and put it next to a piece I wrote junior year of high school, the difference would be staggering,” Rehwald said.

Currently, Occidental students can only take the Composition Seminar four times. Even given his extensive background in music, Rehwald would continue to take the seminar until he graduated if he could because he believes the class has fostered the skills and experience he wants for a future in film scoring.

Schoenberg explained that the seminar is able to hire local professional musicians and applied music staff for the final concert through contributions made to the Benjamin H. Culley Fund. The Culley Fund has enabled students to have a unique experience with profession musicians and expose them to situations profession composers might face.

“Hiring professional musicians also put the student composers in a real world situation,” Schoenberg said via email. “Composers often times show up for a rehearsal a few days before a premiere. They end up having to pull all-nighters in order to implement changes — based on the rehearsal process, and feedback from the musicians– and help facilitate the best possible performance.”

Rehwald appreciates the ability to work with professional musicians because they can handle almost any degree of complexity, so student composers can fully express themselves. They rehearse together twice during the week before the concert to learn the music, once more at a dress rehearsal and then they perform the music in concert open to the Occidental community.

“The programs we use to notate our music have a playback function, but you get a very rigid, MIDI playback sound,” Rehwald said. “Nothing beats the real thing. When they first started to play the intro to her [Audrey’s] piece, I thought to myself, ‘Oh my god, it’s just so beautiful.’”

Audrey Yim (senior) is a piano performance major who took the Composition Seminar for the second time this semester. She interns as a music teacher for South Pasadena middle school and hopes to work as a professor of music history one day.

Though Yim does not necessarily consider herself a composer, she has learned to enjoy the craft. Yim appreciated how the class expands her musicianship, particularly when she was required to reverse her traditional role as the musician and instead become responsible for guiding the musicians as a director.

“[The first rehearsal] was kinda rough, but from that experience, I learned how to work between musicians in a professional setting,” Yim said. “I rarely get to work as a composer having musicians play my music, I’m so used to being the performer.”

She is considering enrolling again next semester, despite her senior recital and senior comprehensive project, and she encouraged all musicians to consider taking the course as well.

“I don’t know where music begins or ends, within my identity,” Yim said. “I don’t know if I developed my love for music because I started so early … but I came to appreciate and really love the story behind music and the composers’ lives. If I can, I would love to keep composing.”

Schoenberg is excited to continue expanding the program and hopes to one day stretch the seminar over two semesters and reincorporate student performers. He imagines professionals could continue to perform pieces as soon as they are finished, and students could perform pre-existing pieces once they have mastered them.

“It’s very important for composers and performers to know each other, to work together, because they’re the next generation of musicians, of creators and performers,” Schoenberg said.

Love original compositions? Email us at Weekly.oxy.edu or Tweet us @OxyWeekly