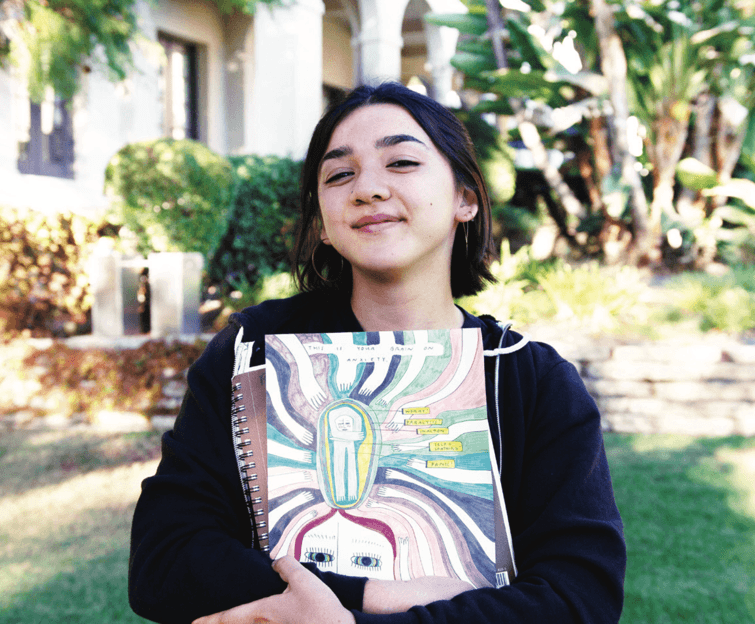 There is a rose on Occidental’s campus. You will not find this rose in front of the Marketplace but rather sketching on a bench in the quad or in her backyard. Rosie Yasukochi (junior), a Studio Art Major, is one of Occidental’s exceptionally talented and introspective student-artists. Her art mainly consists of illustrations made with colored pencils, markers and pens. They are vibrant creations often focusing on the female body and face, sometimes with distorted features. Blank spaces are filled with detailed, meandering patterns. She sketched the whimsical design of a peacefully sleeping girl on the latest KOXY t-shirt that is currently trending on campus, as well as all of KOXY’s promotional posters.

Yasukochi’s artistic evolution began when she was just a little girl. Whenever Yasukochi visited her grandfather, the two would paint together with watercolors. Yasukochi’s artistic inclinations were further fostered in the alternative, artistic elementary and middle schools she attended in her hometown of Seattle. Yasukochi finds creating art, even something as simple as a pattern, meditative and calming.

Over the years, Yasukochi has developed a particular style of drawing, often focusing on faces and bodies. Yasukochi claimed that the images she sketched a year ago did not retain any lasting meaning — she could not recall what she was thinking about when she made them. This realization changed as her art became expressions of her reflection on her identity as a multiracial woman.

“As I’ve been delving into my identity more, especially in terms of race and gender, I think my art has gained a lot more meaning, at least to myself personally,” Yasukochi said. “A lot of work I make is about being a multiracial woman of color and the questioning of that identity over the last couple of years.”

“I wanted to draw people that were more reflective of myself, but whenever I would go to do the features of the face, if felt like a lot to put that [racial identity] upon the person I was drawing. … I never really knew what identity to give them and then it felt overwhelming and then I just stopped drawing faces, I just drew bodies,” Yasukochi said.

Yasukochi is currently on the executive board of MULTI, a club she helped start her first year at Occidental. Yasukochi feels comfortable discussing with the club the thoughts and issues that have come out of her multiracial identity. Another space she cherishes deeply is the Occidental student group Creators of Color. Every couple of months, student artists of color get together, share art, their processes and give each other feedback.

In a recent performance art piece for the Studio Art class, “Art Outside the Bounds: Wanlass Artists in Residence. Manos de Obra: Bodies Making Los Angeles,“ Yasukochi delved deeper into why she finds discomfort in drawing herself. With this piece, she sketched a self-portrait while simultaneously verbalizing her train of thought, which she recorded and then transcribed. For the performance, Yasukochi read this transcription out loud to the class. The piece was unexpectedly emotional and revealing for her by forcing her to confront certain discomforts that she encounters when creating art about herself that she usually does not share out loud.

Looking forward, Yasukochi is critically examining the ways in which a woman artist of color artist navigates the “white art world” and how she characterizes success compared to the classic definition of success, which tends to be limited to getting art on a gallery wall and making money.

“If you’re coming from a marginalized identity in which gallery spaces are white-walled and elite and often owned by white people, they aren’t accessible to members of the community that you come from,” Yasukochi said. “If you have the opportunity to hang pieces in that gallery space, is that selling out to your community or is that to be celebrated by your community?”

As she continues learning about her own identity and what her art means to her, Yasukochi is also exploring her responsibility, as an artist and a woman of color, to other women of color and to informing others about such a complex experience.

Recently, Yasukochi launched a website featuring her art. Support her by checking out the site or paying a little extra attention to the next KOXY t-shirt or poster you see around campus.